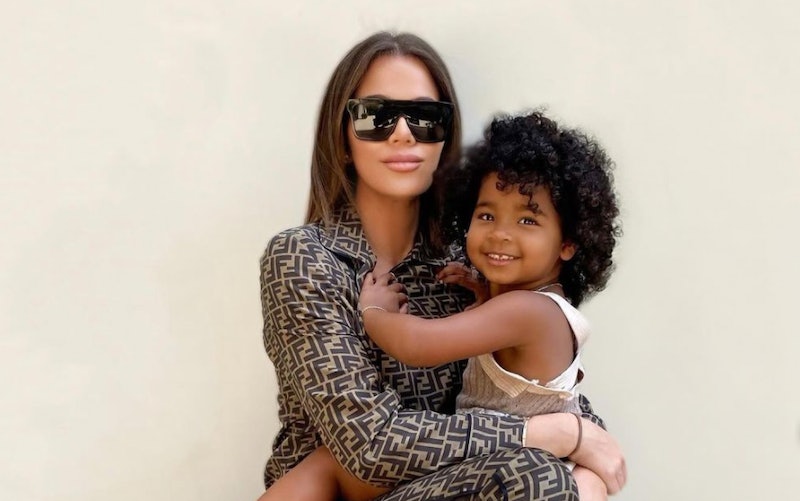 Khloé Kardashian has struggled with body image issues her whole life, and now she’s taking steps to ensure that her three-year-old daughter doesn’t experience the same. In a new interview with Health magazine, the Good American founder said that she’s always trying to teach True about body positivity and is very conscious of the language she uses around her little one.

“I don’t play when it comes to True,” Khloé said. “She’s very tall. People will always say, ‘She’s so big.’ And I’ll say, ‘Oh, she’s so tall.’ I try to make them be more descriptive. I know what an adult means when they say that, but I don’t want her to misinterpret that.” Fortunately, Khloé said True is “really tough,” but that doesn’t mean she isn’t concerned about how negative comments might impact her. “I do try to always tell her that it’s OK if she cries or if something is wrong,” the reality star added.

Elsewhere in the interview, Khloé got candid about her body image and her complicated relationship with food. “When I was younger and was sad, I would eat — I was an emotional eater,” she said. “And then I hated the way I felt after that. I was almost punishing myself for bingeing or having a bag of chips — it just became so much thought.” Now, the Keeping Up With the Kardashians star practices “healthy habits on a daily basis.”

“I have to think of it as a lifestyle rather than thinking, ‘I want to try this diet or some other thing someone was talking about,’” she continued. “I’m so over that stage in my life. It’s cliché, but it’s all about mind, body, and soul. If I am not mentally strong then I physically feel like I can’t do what I want to do.” Still, it’s not easy to stay centered, especially when you have millions of followers who often give their unsolicited opinions.

“There’s been so many days that I’m like, I feel so badass and good, and then my demeanor will be shot down because someone posted a story about how they perceive me or how they think I look,” Khloé said, adding that she’s not sure why we tend to let other people’s perceptions of us dictate how we feel about ourselves. “Normally, when you’re older you turn into titanium,” she continued. “Sometimes I let that stuff get to me, and I have to actively drown that noise out.”

This isn’t the first time that Khloé has opened up about social media and body confidence. In April, she addressed a leaked bikini photo that she tried to have wiped from the internet after her assistant shared it by mistake. “The photo that was posted this week is beautiful,” she wrote. “But as someone who has struggled with body image her whole life, when someone takes a photo of you that isn’t flattering in bad lighting or doesn’t capture your body the way it is after working so hard to get it to this point — and then shares it to the world — you should have every right to ask for it to not be shared.”

The 37-year-old went on to say that “the pressure, constant ridicule and judgment” that she’s received for her entire life has been “too much” to handle. “It’s almost unbearable trying to live up to the impossible standards that the public have all set for me,” she explained, adding that every one of her flaws has been “micro-analyzed and made fun of” by people who don’t even know her in real life.

Khloé closed out her statement by saying that she will continue to “unapologetically” present herself in the way that she chooses to, whether that’s with a photo filter, good lighting, or makeup. “My body, my image and how I choose to look and what I want to share is my choice,” she said. “It’s not for anyone to decide or judge what is acceptable or not anymore.”

More like this
Khloé Kardashian’s Son Was Born A Week Before Anyone Realized
By Jake Viswanath
Kim Kardashian & Tristan Thompson Had An "Inspiring" Thanksgiving Celebration
By Brad Witter
Kim K Is Putting Kanye’s Memorabilia — Like Grammys & Clothes — In A Vault
By Jake Viswanath
In Their Divorce Settlement, Here's What Kanye Reportedly Must Pay Kim K & Kids
By Radhika Menon
Get Even More From Bustle — Sign Up For The Newsletter