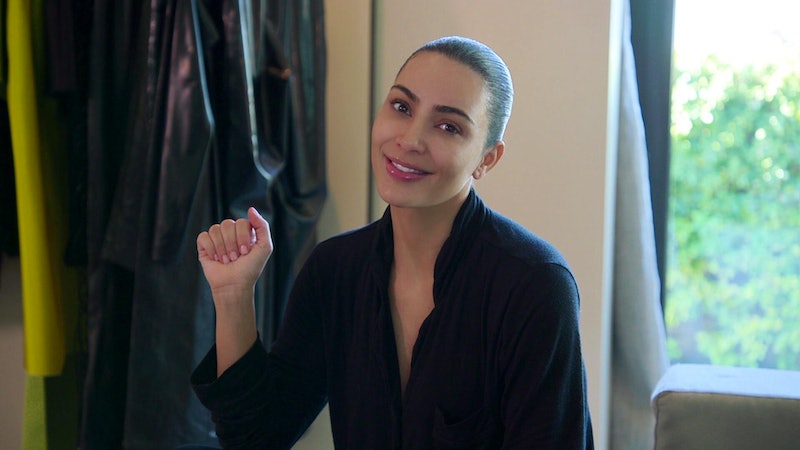 Back in March, Kim Kardashian gave Variety “the best advice” for women in business: “Get your f*cking ass up and work. It seems like nobody wants to work these days.” The backlash was swift, with stars like Jameela Jamil arguing that Kim earned her success from a place of privilege. Now, on the Oct. 13 episode of The Kardashians Season 2, Kim K faced the public response head-on. Speaking to her momager Kris Jenner over the phone, Kim admitted that she felt “mortified” by how her comments were received. “I don’t know what to do,” she said. “It’s all my fault.”

Kris was quick to comfort her daughter, saying that “people misunderstood” her intentions, but in a confessional, Kim took full responsibility for her comments. “When I made that statement, it wasn’t a blanket statement toward all women, as if I didn’t think women work hard or respect the work that they do because I see it every single day,” she explained. “The most important people in my life that have shaped my life and shaped my career and helped me get to where I am today all are women, so I hated that that got misunderstood and for that, I’m so sorry.”

Previously, in a March interview with Good Morning America, Kim claimed that her response was taken out of context and attributed her tone to a preceding question. “That statement that I said was without questions and conversation around it, and it became a soundbite really with no context,” she said. “In that soundbite, I came off of the notion in the question right before, which was, ‘After 20 years of being in the business, you’re famous for being famous.’” However, the interviewer, Elizabeth Wagmeister, clarified on Twitter that her “question about being famous for being famous came after that question” about women in business, which is seen in footage shown on The Kardashians.

While at lunch with her sisters Khloé Kardashian and Kendall Jenner, Kim said that she stood by her message that people must work hard in order to achieve their career goals. “I said what I said about people working,” she said. “Do I believe in that? Yes. I believe that you have to work hard in order to do that. But I was just so blindsided by how angry people got.”

However, Kim also understood why people took her comments to heart. “Enough people were triggered so I wanna be responsible,” she said. “And I do understand that a lot of people weren’t given the same opportunities as us.” While she acknowledged her family’s privilege, she wished more people realized how she witnessed her mom “work her ass off” by getting her agents’ license to represent her ex-spouse Caitlyn Jenner after they were forced to sell their Hidden Hills home and move into an apartment. “She started her career making money at 50,” she said.

Khloé came to Kim’s defense in a confessional, remarking that every response Kim could have given would be the wrong one. “No matter what her answer would have been, people would crucify her regardless because they’re always going to say, ‘Well, what do you know? You were born with a silver spoon in your mouth’,” Khloé said. “But it’s frustrating when the world doesn’t want to see you for who you are, and they always want to make whatever you say a personal attack. So it’s the right message, the wrong messenger.”