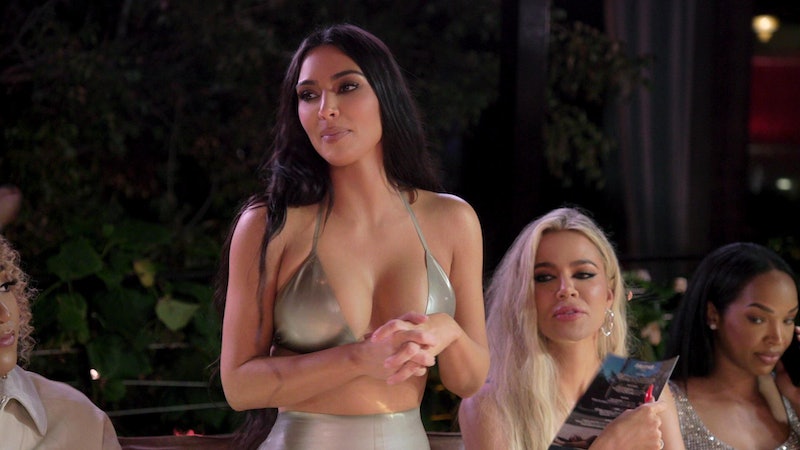 Kim Kardashian won’t leave her photos in anyone’s hands but herself. On the Oct. 20 episode of The Kardashians Season 2, Khloé got frustrated that Kim wouldn’t put down her phone and start partying on their Miami trip because she was too busy looking through and approving photos from her SKIMS dinner. “I don’t trust anybody else to tell me when I look good,” she quipped.

As Khloé said in a confessional, all she wanted on her one night in Miami was to party like nobody was watching. “I hate those people that go somewhere and they’re just like a Debbie downer,” she said. “That’s so not me. I am gonna party like it’s 2009 and I’m taking Miami back.” Kim retorted back in her own confessional, saying she was protecting Khloé from unflattering photos. “B*tch, you’ll thank me later because I’m editing all of our f*cking photos to delete all of the bad ones, and they have to go to print tonight,” she said. “I’ll tell you if Malika looks bad, I’ll delete it, even if I look amazing. So like, no one else is going to look at like 10 people in a photo, but I do.”

Eventually, Khloé got Kim to get off her laptop after jokingly yelling harsh words at her team: “Get your f*cking ass up. Let’s f*cking go. Everyone take a [censored] and do something! You guys are all limp f*cking motherf*ckers, and I don’t have the energy for you f*cking losers.”

This isn’t the first time that Kim has shown how seriously she takes photos, especially when it comes to social media. Back in April, Khloé accidentally confirmed a fan theory that her daughter True Thompson was photoshopped into Kim’s photos of her daughter Chicago at Disneyland. Kim then fessed up to the Photoshop fail, explaining that she inserted True into the photos because Kylie Jenner didn’t want her daughter Stormi to be posted on Instagram at the time, but Chicago’s jacket went too well with her Instagram feed to be ignored.

“You know how much a good aesthetic means to my soul, and I will be damned if Kylie will ruin that for me and mess up my IG grid,” she wrote on her Instagram Story. “I didn’t think it would be that big of a deal if her own mom questioned if I snuck her to a Disneyland for the first time.” Clearly, Kim will stop at nothing to make sure her photos are exactly how she wants them.