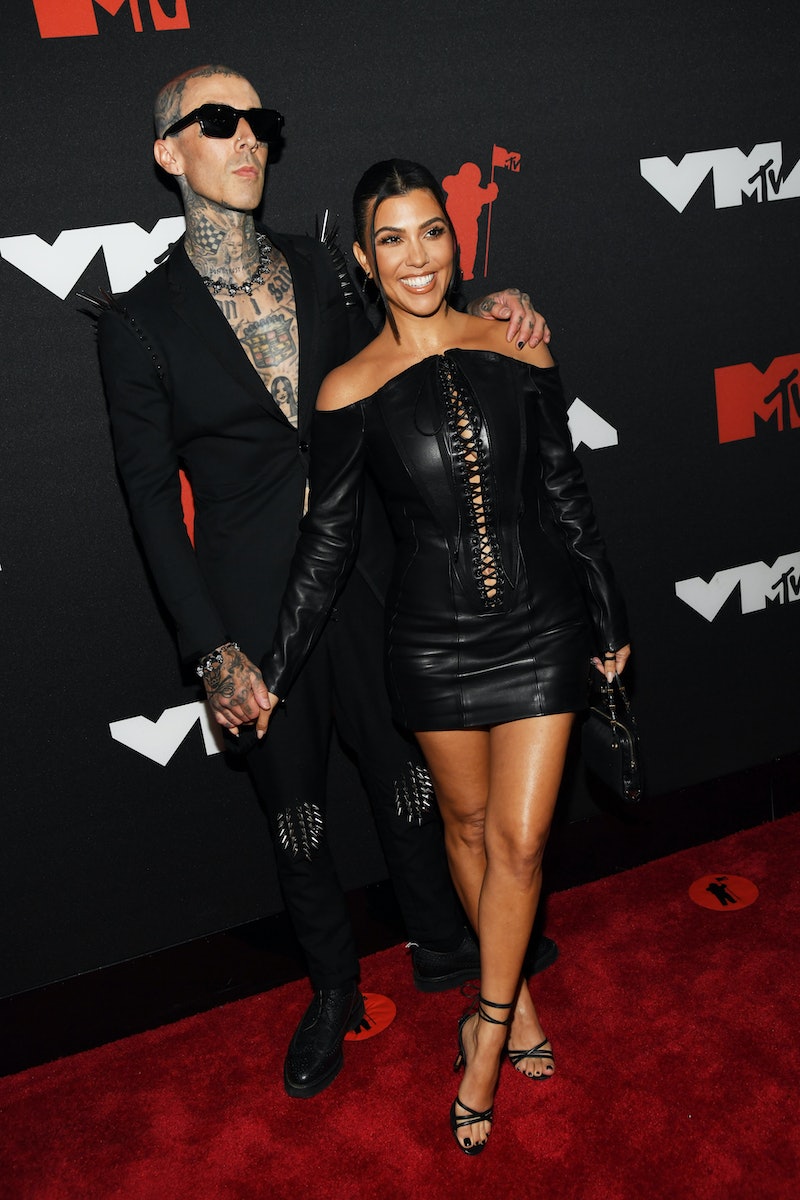 The shift from September to October means that spooky season is officially here — and if you’ve already decked out your space for your favorite fall holiday, you’re not alone. Kourtney Kardashian wasted no time preparing her home for Halloween, and she took to Instagram on Oct. 1 to show off her finished work. “‘Tis the season,” she captioned her carousel of photos, showcasing the stuff of holiday decor dreams: towering skeletons guarding her front doors (and one sitting at the dining room table), countless candles, cobwebs, and pumpkins with scary impressions. In addition to surrounding herself with seasonal spirit, Kardashian embodied the Halloween vibes in her outfit, too — sporting a comfy skeleton set and editing on a pair of horns (see the second slide below).

In her story, Kardashian also shared flowers blooming from a skull vase. It wasn’t all smoke and mirrors, though — the Poosh CEO stumbled upon an apparently real spider at some point during her Halloween festivities. “I am not well,” she wrote. Meanwhile, Kardashian’s boyfriend, the musician Travis Barker, also seemed to be enjoying his first official Halloween with the family. On his Instagram story, he shared snaps of a bony bride cradling her groom and another massive skeleton looming outside of the kitchen.

Though it probably wasn’t an intentional homage to Phoebe Bridgers, who’s become famous for her own signature skeleton look (and donned an extra-glam version of it to the Grammys), the similarity of Kardashian’s outfit to the “Kyoto” singer’s preferred ensemble stood out all the same.

Kardashian wouldn’t be the first person to accidentally invite the comparison — and it’s pretty likely she won’t be the last, now that we’re so close to Halloween. On TikTok, a clip of user tanman99 singing lyrics from Bridgers’ “Moon Song” while greeting a skeleton-clad Goofy at Disneyland has been used on everything from Build-A-Bears to Bitmoji to pop culture moments, like Donnie Darko.

Several TikTok users have already included the audio in videos about Kardashian’s latest look — which, according to user goodwoodx, seemed to confirm Kardashian as a “pharb,” aka a Bridgers stan. And why not? As Kardashian and co. usher in Halloween a month early, Bridgers’ haunting lyrics and iconic style are sure to inspire your own spooky season vibes.

More like this
Kim Kardashian Gives “Bucket List Dream” Lecture At Harvard
By Alyssa Lapid
Khloé Kardashian Writes Touching Instagram Tribute To Tristan Thompson’s Mother
By Alyssa Lapid
'Bachelorette' Vet Clare Crawley Unveiled 2 Special Wedding Day Accessories
By Stephanie Topacio Long
North West Will Make Her Acting Debut Alongside Mom Kim Kardashian
By Radhika Menon
Get Even More From Bustle — Sign Up For The Newsletter
From hair trends to relationship advice, our daily newsletter has everything you need to sound like a person who’s on TikTok, even if you aren’t.