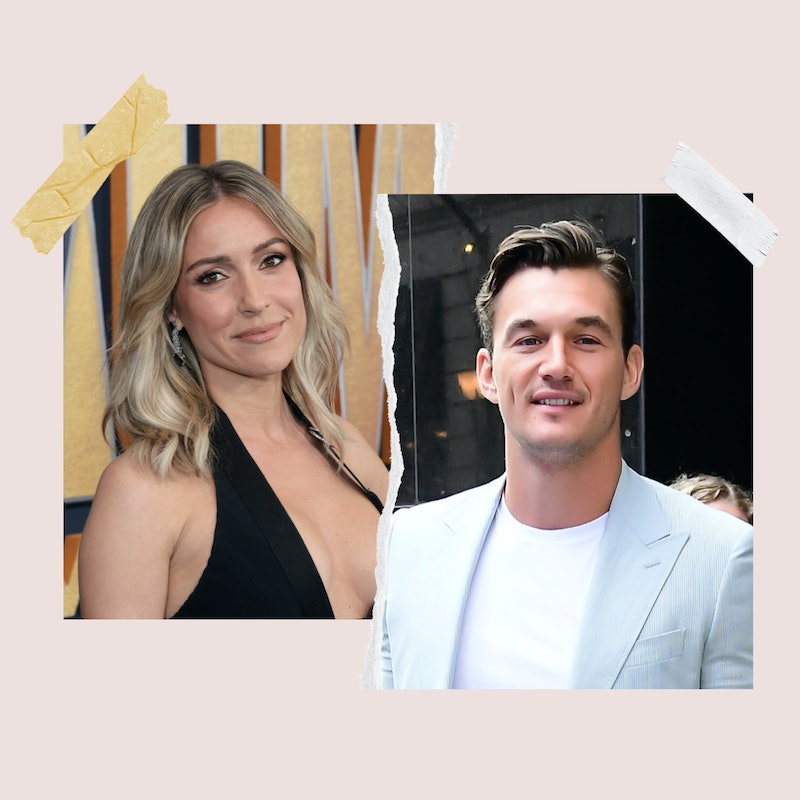 Kristin Cavallari and Tyler Cameron might be an item — for real this time. As reported by Page Six, The Hills star and the Bachelorette alum were seen getting cozy at a New Year’s Eve party, naturally sparking dating rumors once again. In April, US Weekly spotted the pair making out during a photoshoot for her clothing and jewelry line Uncommon James. In other words, their steamy smooch was strictly professional, but this time around, some think they could actually be an item.

On Dec. 31, former Bachelorette Kaitlyn Bristowe and her fiancé Jason Tartick shared several photos and videos of them out with the duo on their Instagram Stories. While the posts have since expired, Page Six reports that one video showed Cameron pulling Cavallari closer while they were dancing and embracing each other. Tartick also shared a video of him questioning his fellow Bachelor Nation member about his dating life, which Cameron kept quiet about.

For their Uncommon James campaign, the Very Cavallari star wore a flowy dress and cowboy boots, while Cameron kept it simple in jeans and a gray T-shirt. In one of the photos on the Western-themed set, his arms are wrapped around her waist. Cavallari seems to be standing on her tiptoes to kiss Cameron, which tracks because he’s over six feet tall. But despite their chemistry, Cavallari later confirmed they were just friends, even joking that she hired Cameron “to get press” before singing his praises. “He’s honestly the nicest human being on the planet,” she told The Bellas Podcast. “I have nothing but good things to say about him. Everyone’s like, ‘Tell me everything.’ I’m like, ‘I think he’s great but… we are not dating.’”

Prior to their New Year’s hangout, a Bachelor fan account shared fan footage of Cavallari and Cameron grabbing lunch together in Franklin, Tenn., indicating that their working relationship has become friendly at the very least.

Although their kiss was for work and not pleasure, nothing is standing in the way if they are indeed pursuing a romantic relationship. Cavallari, 35, filed for divorce from her estranged husband, NFL star Jay Cutler, in April 2020 after seven years of marriage. The former couple shares three kids — sons Camden, 9, and Jaxon, 7, and daughter Saylor, 6. After being linked to comedian Jeff Dye, Southern Charm’s Austen Kroll, and singer Chase Rice, the former reality star is ready to date again. “I’ve honestly needed the past 2 years to work through some heavy stuff,” she said in an Instagram Q&A on April 2. “I dated a little here and there but no one serious. I am finally in a place where I’m ready for a relationship.”

The You Deserve Better author is also single. After getting his heart broken on Hannah Brown’s season of The Bachelorette, Cameron briefly dated Gigi Hadid, followed by an eight-month relationship with model Camila Kendra. But less than two weeks after publicly declaring his love on an episode of Watch What Happens Live, the pair split in August 2021.

Last July, Cameron told host Andy Cohen that he was “very in love” with Kendra. “She said ‘I love you’ and then I came later,” he confessed. “It was at a moment of pure love, like, it just came out. You know what I mean? It was not the way I expected it, but it was beautiful.” Considering how smitten Cameron appeared to be on WWHL, the breakup came as a surprise. “Things were going well until they weren’t,” an insider told Us Weekly at the time. “Friends were surprised things ended so quickly.” However, a separate source told Page Six that “things took a turn.”

More like this
Paris Hilton & Carter Reum’s Relationship Timeline Includes A 2023 Grammys Date Night
By Bustle Editors
Everything You Need To Know About Kanye's Post-Kardashian Dating Life
By Bustle Editors
Michael B. Jordan Tackled His "Public Breakup" With Lori Harvey On 'SNL'
By Brad Witter
Who Is Pete Davidson Dating? He & Chase Sui Wonders Got Caught Kissing
By Jake Viswanath
Get Even More From Bustle — Sign Up For The Newsletter
From hair trends to relationship advice, our daily newsletter has everything you need to sound like a person who’s on TikTok, even if you aren’t.