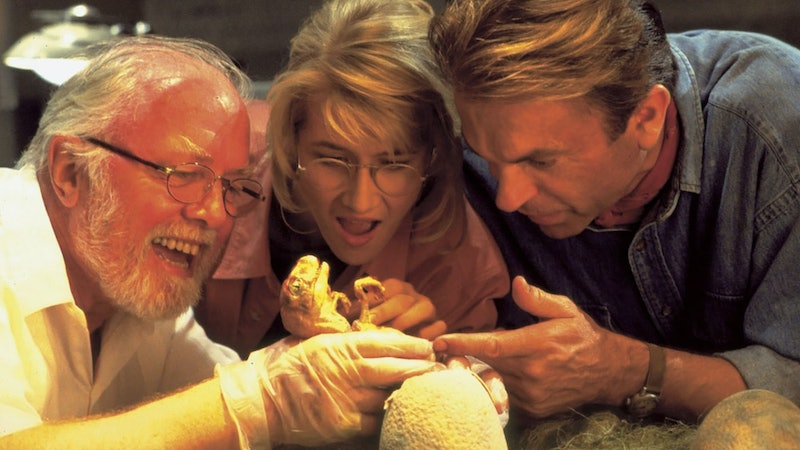 When you make a habit of rewatching nostalgic faves, you’ll inevitably come to a pretty distressing conclusion: the cool, mature, grown-up characters you idolized as a kid were often very young themselves. (Exhibit A: Kate Hudson was 23 years old playing glamorous career columnist Andie Anderson in How to Lose a Guy in 10 Days!) And apparently, even the actors playing said cool, mature characters are prone to the same surprise. In a recent interview with The Sunday Times ahead of Jurassic World Dominion (out June 10), Laura Dern and Sam Neill — who are set to reprise their roles from Jurassic Park as Ellie Sattler and Alan Grant, respectively — reflected on the shock of realizing they had a 20-year age gap while making the first film.

“I am 20 years older than Laura,” Neill told the paper. “Which at the time was a completely appropriate age difference for a leading man and lady!” As the Peaky Blinders alum explained, he reckoned with the gap after seeing himself included in an article about “old geezers and gals” on screen.

Dern said she didn’t realize the age difference until later, either. “Well, it felt completely appropriate to fall in love with Sam Neill,” the Big Little Lies star said. “And it was only now, when we returned in a moment of cultural awareness about the patriarchy, that I was, like, ‘Wow! We’re not the same age?’”

Yes, Dern was only 23 years old playing a paleobotanist in the original Jurassic Park. For what it’s worth, Ellie and Alan aren’t together in the Jurassic Park novel by Michael Crichton — but in the film, some kind of budding relationship is definitely implied (the pair talks of kids, and Alan tells Jeff Goldblum’s flirty Ian Malcolm that Ellie is not “available”). Last time we checked in with the pair, in Jurassic Park 3, Ellie had started a family with someone else — but relationship status aside, here’s hoping for even more iconic Laura Dern-isms à la “Woman inherits the earth” in Dominion.

More like this
The 'Jurassic Park' Cast, Then & Now
By Arya Roshanian
Jennifer Aniston Is Still Wearing That 'Friends' Dress She Stole From Monica's Closet
By Jake Viswanath
Christina Aguilera Had A Mini "Lady Marmalade" Reunion With Mya At LA Pride
By Jake Viswanath
Photos Of The 'Elvis' Cast vs. Their IRL Counterparts Will Have You All Shook Up
By Grace Wehniainen
Get Even More From Bustle — Sign Up For The Newsletter