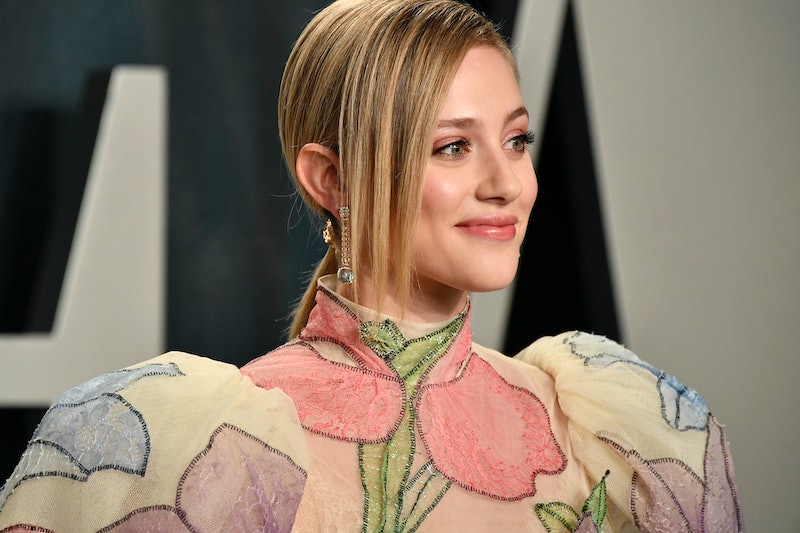 There were a lot of factors at play when Lili Reinhart decided to come out back in June — and yes, one of them was her split from Cole Sprouse. While talking about her sexuality on the LGBTQ&A podcast, Lili Reinhart revealed she waited until she was single to come out as bisexual, because she was worried that people would criticize her. While promoting an LGBTQ+ BLM protest in the West Hollywood neighborhood of Los Angeles on June 3, Reinhart publicly came out on her Instagram Story, writing, "although I've never announced it publicly before, I am a proud bisexual woman." (Reports of Reinhart and Sprouse's split went public in May, though they wouldn't confirm it until months later.)

On the September 22 episode of the podcast, Reinhart explained that while she has long been open about her sexuality in her private life, she was "afraid" to come out publicly for a long time. "I didn't want people to tell me that I was lying to get attention or something," she explained. "And so I just kept my mouth shut." That fear was compounded by the fact that she had experienced biphobia when she did open up to certain people about her sexuality.

"I've told people in the past and they've told me, 'Oh, it's a phase,'" Reinhart revealed. "And I'm like, 'Okay, great, thanks.' So that's discouraging, obviously." And because of those "discouraging" reactions, Reinhart also made the decision to wait until she was single to publicly come out. "I think that's why I didn't come out as bisexual until I was not in a relationship anymore," she said. "Because it's easy for people to question, 'Oh, but you're with a man that's straight.' It's like, well, Anna Paquin is married to a man, but she is bisexual."

Reinhart continued, "I didn't want to put my ex [Sprouse] in a position, it seems like it would have been a little strange to come out when I was in a hetero relationship. It just seemed, I don't know, maybe a little bit like I was looking for something else while I was in the relationship." According to Sprouse's statement on the split in August, the first separated in January and broke up for good in March; she came out a few months later. "I didn't really think about coming out until after I was not in a relationship anymore. It just felt more organic that way."

This is not the first time that the Riverdale star has opened up about her concerns about coming out. In August, Reinhart told Flaunt magazine that she was worried people would think she was "faking" her bisexuality for attention. "I knew full well that I was attracted to women from a young age," Reinhart explained. "[But] I felt that since I’ve exclusively been in heteronormative relationships, it would be too easy for any outsider, especially the media, to vilify me and accuse me of faking it to get attention. That’s not something I wanted to deal with."

However, after getting involved with the Black Lives Matter movement, Reinhart was inspired to live her truth by seeing all of the protests and support across the country. "It was incredible to be surrounded by so many people who are actively fighting against the injustices that are happening right now," she recalled. "Enough is enough and hopefully we’ll see real change from the actions that are now being taken."

In addition to allowing her to be fully open about her identity and being part of that "change," coming out as bisexual has also had another, more personal benefit for Reinhart. "I did have a couple of ladies sliding into my DMs which I thought was funny, but also flattering," she admitted on the LGBTQI&A podcast. "It was interesting to see the difference in my DMs after I came out, which was a nice little surprise ... And also just like, I hate to say it, [there were] more quality human beings."