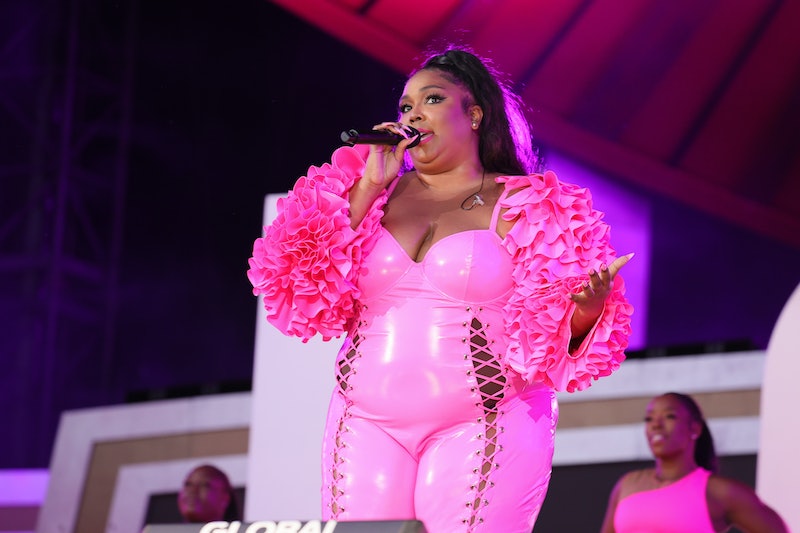 Lizzo is once again using her platform to bring awareness and inspire change. On Saturday, Sept. 25, the “Truth Hurts” singer performed at the Global Citizen Festival in New York City’s Central Park, where she took a few moments to thank attendees for allowing her to give back. “Thank you so much to Global Citizen for having me,” she said. “You know, big Black girl from Detroit by way of Houston, Texas, doing big ass things with my life. I’m just so grateful every time I can step on the stage and sing for y’all. Thank you so much.”

The “Juice” singer, 33, went on to say that being famous forced her to consider how she wanted to use her influence. “Now I’m a rich b*tch,” she said. “That’s exciting, that’s never happened. I’ll be like, ‘What kind of rich b*tch do I want to be?’ And I decided I want to be a philanthropist. I want to give back. Why would God give me so much if I can’t give it back? So thank you so much for giving me the opportunity to give back.”

The pop star then took the opportunity to remind her fans whose land they were standing on. “I have to shout out that the land we’re standing on is Seneca Village,” she said. “Before it was Central Park, it was Seneca Village, and if you don’t know what it is, that was an affluent African American community.” The village was ultimately destroyed in the mid-19th century to make way for the park, and its residents were forcibly evicted and their homes bulldozed.

“As we talk about climate change and making the world a better place and solving homelessness, we also have to talk about the institutionalized racism that happens in this country all the time,” Lizzo added, explaining that to create a better future, we need to be honest about the past. The rapper has long been vocal about issues that are important to her, including racism that she’s experienced on a more personal level.

Days after releasing her single “Rumors” in August, Lizzo took to social media with a tearful message to the “fat phobic” and “racist” haters. “On the days I feel like I should be the happiest, I feel so down,” she said at the time, adding that she works 12-hour days doing promos and interviews, writing and recording music, and shooting music videos. “It’s like it doesn’t matter how much positive energy you put in the world, you’re still going to have people who have something mean to say about you.”

Although the hateful comments don’t usually bother her, Lizzo confessed that the negativity can be overwhelming at times. It’s fat phobic, it’s racist, and it’s hurtful,” she said. And after addressing the many body-shaming comments she’s received, the “Good As Hell” singer shut down claims that she makes music for a white audience. “I make music that I like, that’s important to me, and I make music that I hope helps people,” she said. “I’m not making music for white people, I’m not making music for anybody. I’m a Black woman making music. I make Black music, period.”

More like this
'RHOSLC’s Heather & Whitney Are Still On A “Friendship Break” After Season 3 Reunion
By Jake Viswanath
Everything To Know About 'RHOSLC' Season 4
By Jake Viswanath
Melanie Lynskey Met Her Husband Jason Ritter While Filming 'The Big Ask'
By Alyssa Lapid
Vanessa Hudgens Is Reportedly Engaged To Cole Tucker
By Jake Viswanath
Get Even More From Bustle — Sign Up For The Newsletter
From hair trends to relationship advice, our daily newsletter has everything you need to sound like a person who’s on TikTok, even if you aren’t.