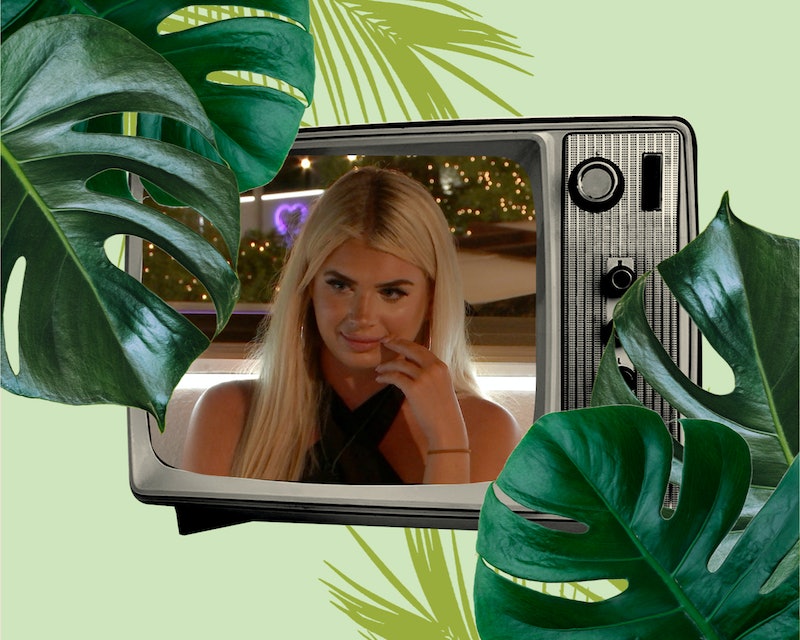 In the slow motion car crash that is Jake and Liberty's relationship, we’ve now reached the moment of impact.

It's been a long-running background tension throughout the series: the imbalance in Jake and Liberty’s relationship and, more specifically, whether or not Jake’s feelings are genuine. Doubts began to surface in Liberty’s mind as she took note of Jake’s distance and seeming interest in Mary, who we all know is his “type on paper.” Was she being taken for granted? And then there was the moment where Jake physically held Liberty back from embracing Kaz when she came down from the rooftop after Tyler’s Love Actually-inspired exclusivity proposal. His “logic” being that it would make for a better camera moment if Kaz and Tyler worked their way through the rest of the contestants and allowing them four – Tyler, Kaz, Liberty, and Jake – a special moment. Of all accusations ever levied against contestants throughout Love Island, this was perhaps the most mask-off moment in the show’s history, and one that left viewers both confused and concerned.

Then Liberty confronted Jake on the rooftop where he finally dropped the L-bomb, weeks after she did. It is fair enough if Jake wasn’t ready to tell Liberty he loves her, the problem is that Jake’s reaction to Liberty sharing her unease over their relationship dynamic was ultimately to pacify her with the line she’s been waiting for, clearly in an attempt to dismiss and solve all the concerns of their relationship without actually addressing them, or even knowing clearly what the concerns are. So it was hardly surprising that the girls’ reaction to the news was incredibly muted. This wouldn't be the first time public perception about who’s “faking it” gets it wrong. Molly-Mae in Season 5 was often cruelly nicknamed “Money-Mae”, with viewers swiping at her relationship with Tommy. Two years later, they are still going strong. But Jake and Liberty’s situation feels different, not least because in an incredibly rare occurrence, public consensus and the villa’s unanimous judgement match identically. (Lest we forget, Liberty and Jake were voted the most one-sided couple, and most likely to split up.)

Sunday night’s episode was one of the most Soap Operatic of the season. The staged intervention of girls sat around the fire pit combined with Jake tearing off his shirt and mic, leaving the villa’s premises is exactly the type of content we sign up for. But it also left me feeling a lot of pity for Liberty, who I do very much adore as a contestant and want so much better for. In this situation, where there is a clear popular consensus from both her fellow islanders and much of the public that her relationship isn’t built on genuine and mutual love, there are two reactions Liberty can have. The first (and most dignified) would be to cut her losses, end the relationship with Jake, and walk out of the villa with her head held high. The second is to stay committed to Jake and take an “us against the world” approach. For now, the latter has triumphed, and so for another week we can’t yet relax our shoulders and unclench our jaws from the pain of watching their relationship play out.

Jake’s plans falling apart in real time aside, I feel there’s been a lot of positive development between contestants and partners. Chloe has soared into pole position as one of my favourite girls in the villa. Her tag team efforts with Faye – even electing to share the heat from Jake’s confrontation – has been so emblematic of what is perhaps Love Island’s most successful and enduring dynamic across seasons: female solidarity.

There was much flack directed at Faye when she chose to excuse herself from the post mortem with Liberty, with many painting this as another case of “main character syndrome”. But personally, I think it was a very mature step. Evidencing self-awareness and removing herself from situations she knows she can’t emotionally handle may be proof that Faye is developing more healthy coping strategies. The challenge of reality television, however, is that a few unfavourable edits can mean you’re condemned or labelled for life, leaving viewers unsympathetic to any attempts to show personal growth, reflection, or changed behaviour.

I still have absolutely no idea what the different NVQs are supposed to signify, nor the 3-0, 2-1 football analogies that the boys have curated

The penultimate week of Love Island is always a bit of a strange moment of the show. Most of the couples have settled down and heads aren’t realistically turning anymore – and we all know it’s those tensions and betrayals that ground the drama of the show – so you’re sort of sitting around waiting to see if something happens. Putting aside the Jake and Liberty plotline, seemingly the only major plotline this week (the Matt-Priya-Brett love triangle was barely worth it’s screen time), plenty of this week has descended into quite meaningless filler. I still have absolutely no idea what the different NVQs are supposed to signify, nor the 3-0, 2-1 football analogies that the boys have curated, and the sequence of graduations hosted by UCL medical student Priya just felt unnecessarily long.

Still, though, I was glad to see my favourite challenge of the entire show – the heart rate challenge – return in one its hottest instalments ever. Highlights of course have to be Kaz’s stunningly sexy display, Mary’s ridiculous mermaid outfit, and of course Toby, our very own ‘Love Island Man’, and his “up up and away” segment in the Beach Hut. It’s one of those challenges that viewers cry out for because it’s the perfect blend of real humour and incredible sexual tension – and it also lets us speculate on who does and doesn’t actually have the hots for each other. As other challenges have fallen along the way, like the lie detector test and the tweets challenge, may this one live on forever.