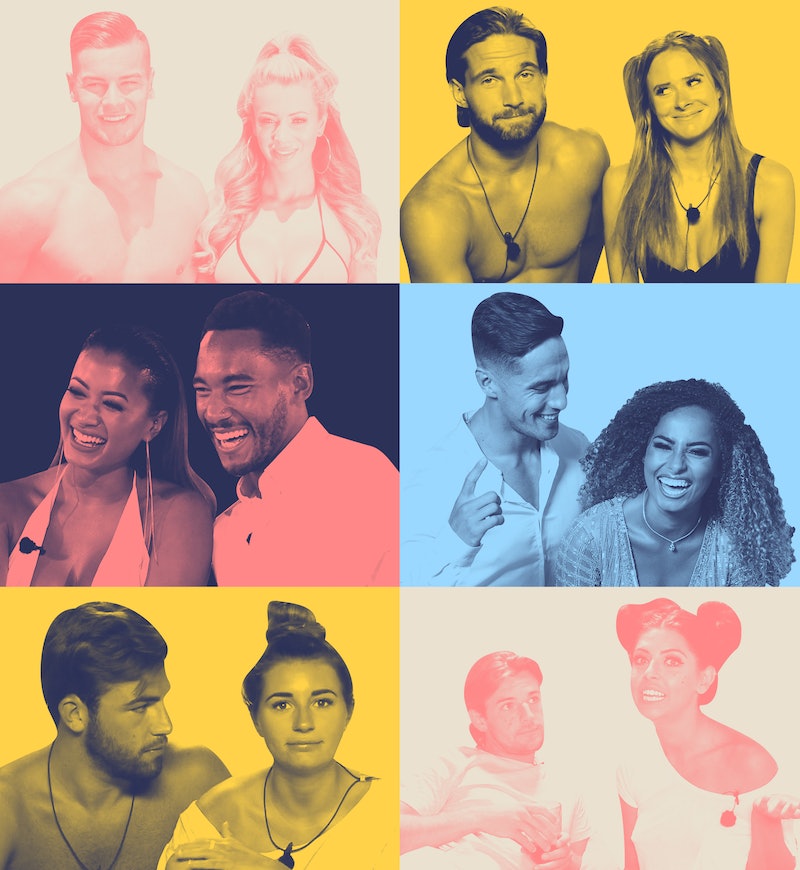 It might be the show that everyone hates to love (or loves to hate), but at the end of the day, it is what it is. You’ve got to admit you’ve missed watching a bunch of dead-fit melts pull someone for a chat so they can graft, and lay it on factor 50 thick with the bev that is their type on paper in order to find love. Sound like a load of nonsense? You’d be forgiven for forgetting some of the key Love Island vocab, it has been over a year since the last bunch of hot singletons entered the villa after all.

The good thing is, Love Island is back for 2021 *cue theme tune*. So, the countdown is on to nightly viewing of tanned twenty-somethings asking each other “Where’s your head at?” on a loop. After ITV was forced to cancel the summer 2020, show producers promised Love Island would return "bigger and better than ever" this year. I, for one, cannot wait.

To warm up for the new season, now’s the perfect time to remind ourselves which of the show’s previous couple’s have made it on the outside. Life inside the villa is undoubtedly different to the real world, so it's no surprise that many of the show’s couples have not had a fairytale ending. That said, there are still a number of contestants who caught feelings that lasted.

As the nation gears up for the seventh season (yes, OG’s, you’ve been watching for seven years now), we take a look at the previous Love Island couples, and where they are now.

Jess Hayes quickly became one of the inaugural Love Island series’ favourites, and after a few in-villa rivalries, Max Morley ultimately decided Jess was his type on paper and the couple became official. They were declared winners of season one, but split soon after leaving the villa.

Jon Clark and Hannah Elizabeth were together from day one of the 2015 series, making it official just three weeks in. They left the villa as a couple, and Jon even popped the question before the finale, but the real world proved too much and they spilt a few months after the series ended.

Lauren Richardson and Josh Ritchie might have hooked up on day two of the series, but she later cracked on with Chris W and Luis, while Josh coupled up with Jess and Naomi. The pair eventually returned to their OG coupling to leave the villa in third place, but called it quits soon after.

Luis Morrison and Cally Jane Beech made it to the final in 2015, but didn’t place top three. They tried to make it work post-villa, and even had the first Love Island baby – their daughter Vienna was born in 2017. However, their relationship ended in September 2018.

It's safe to say that Jordan Ring and Zoe Basia Brown were never really an “end game” couple. While they did make it official in the villa, they didn’t last long in the real world, and called it quits before the summer was up.

Cara De La Hoyde and Nathan Massey paired up on day one of season 2, and went on to win, but split a few months after leaving the villa. However, in true Love Island style, the couple reconciled after Cara fell pregnant with their first child, Freddie George. Cara and Nathan eventually married in 2019, and welcomed a second child, Delilah in 2020.

Kady McDermott and Scott Thomas had, shall we say, a passionate relationship. From OTT fights to grand displays of affection, the couple ended up becoming one of the season’s favourites, taking third place. They continued their relationship outside of the villa, and even moved in together, but ultimately split in 2017.

Adam Maxted and Katie Salmon were a late coupling in the series. With viewers on their side, they managed to make it to the final, coming in fourth place, but called it quits shortly after leaving the villa.

Olivia Buckland found her type on paper when Alex Bowen walked into the Love Island villa in week three. It could’ve gone pear-shaped when Alex spent a night in the hideaway with Zara Holland, but the couple came out of the villa stronger than ever. Since, they’ve been on many holidays, bought a house, became the first Love Island couple to get married in 2018.

Terry Walsh was responsible for one of the most memorable moments of season 2: dumping Malin Anderson while she was watching from home, then swiftly moving on with Emma-Jane Woodhams. Despite viewer scepticism, the couple made it to fifth place, before calling time on the relationship a few months after leaving the villa.

One of the season’s favourite pairings, Amber Davies and Kem Cetinay had flings with other islanders after the Casa Amor interlude, but ultimately found their way back to each other to be crowned winners. However, they split in December that year, blaming their “difficult” schedules. Amber is currently single, and Kem has been linked to a number of famous faces – The Sun even recently hinted at rumours they may get back together.

Everyone wanted happiness for Camilla Thurlow in the Love Island villa. Enter, model Jamie Jewitt. The adorable couple made it all the way to the final, coming second. However, they won the Love Island lottery IRL, and have since moved in together, welcomed baby Nell, and are now engaged.

Despite coming third, and landing themselves a spinoff reality show, Chris & Olivia: Crackin' On, Chris Hughes and Olivia Attwood ultimately broke up on screen… awks. Chris has since been linked to Little Mix’s Jesy Nelson, but is currently single, while Olivia found love with Blackburn Rovers footballer, Bradley Dack, getting engaged in 2019.

Although Marcel Somerville and Gabby Allen made it to fourth place, and tried to make it work outside the villa, the relationship was short lived. The couple broke up after rumours that the Blazin' Squad star had been unfaithful.

Although Dom Lever and Jess Shears didn’t make it to the final, they deserve an honourable mention. They were the first couple to break up in season 3, when Jess was dumped from the island, but soon reconciled once the series was over. The couple married in an intimate ceremony in Mykonos in 2018, and welcomed a baby boy in 2019.

Dani Dyer and Jack Fincham were together from day one of the fourth season, going from strength to strength as one of the most adorable pairings and firm fan favourites. After becoming Love Island winners, the pair moved in together and got a puppy, but it didn’t work out and they broke up in December 2018.

After the dramatic Laura-Wes-Megan love triangle, fans hoped that Laura Anderson had found her type on paper in Paul Knops. Despite being runners up, the pair announced their split just two months after leaving the Love Island villa.

Kazimir “Kaz” Crossley and Josh Denzel were a Casa Amor success story, ultimately coming in third. The couple tried to make it work post-villa, but called time on the relationship in February 2019.

Megan Barton-Hanson and Wes Nelson had a rocky Love Island ride, ending in fourth place. They went on to move in together, but announced their split in January 2019 in a Gwyneth Paltrow and Chris Martin-esque parody, after Wes’ appearance on Dancing On Ice.

Although self-styled ladies man Adam Collard claimed to have found ‘the one’ in Zara McDermott, she was dumped from the villa before their relationship could really get going. The couple tried to make it work IRL, but called it quits in February 2019. Zara is now coupled up with Made In Chelsea star Sam Thompson.

The hilarious, fiercely loyal, no-nonsense Geordie Amber Gill had her fair share of heartbreak in the season five villa, but with just two weeks left, she couple up with new Irish entrant Greg O'Shea to win the £50,000. Although the pair remained amicable, they split shortly after leaving the villa.

Despite not being crowned winners, power couple Tommy Fury and Molly-Mae Hague are among the 10 highest earning Love Island contestants according to research. The couple are still together, loved up and living in Manchester.

India Reynolds made a beeline for season five favourite, Ovie “Message!” Soko, to take third place. However, they soon called it quits due to their “conflicting schedules”.

The unlikely couple, Curtis Pritchard and Maura Higgins seemed smitten (who could forget how Curtis made Maura’s nether regions… ahem, flutter). However, after several cheating rumours on the outside, the couple eventually split eight months after leaving the villa.

Not technically a villa couple, but a Love Island couple nonetheless (and one that the stans were hoping for since day one). The hilarious Chris Taylor and Maura Higgins remained best mates post-villa, confirming their romantic relationship in November 2020. It was sadly short lived, and they split in May 2021.

Paige Turley and Finley Tapp were crowned winners of the inaugural winter Love Island in 2020. Having spent lockdown together at Paige's family home in Scotland, they are now living in Manchester together, and judging by their social media timelines are still pretty smitten.

Luke Trotman and Siânnise Fudge took their time in the villa, finally coupling up on day 18. They moved in together in May 2020, and welcomed a puppy, Nala, in January 2021. We love to see it!

Luke Mabbott and Demi Jones might have made it to third place, but they never made it “official” and didn’t last long outside the villa. Luke has since moved on with season five contestant Lucie Donlan, and judging by their Instagram posts, they seem very happy together with rescue pup Bunny!

A Casa Amor love story, Ched Uzor and Jess Gale – who entered the season 6 villa with her twin sister, Eve – split in the summer of 2020, after “feeling the effects of lockdown separation”.

Eva Zapico and Nas Majeed didn’t quite make it to the final, but deserve an honourable mention as they’re so damn cute, and still together.

Mike Boateng and Priscilla Anyabu made it to fifth place, and made a go of it post-villa with Mike saying he’d moved to London “permanently” to be with Priscilla on ITV’s Love Island: What Happened Next? Sadly, it looks like Mike and Priscilla have called it quits after 15 months of dating, and they have both wiped the presence of the other on their Instagram feeds. Boo!