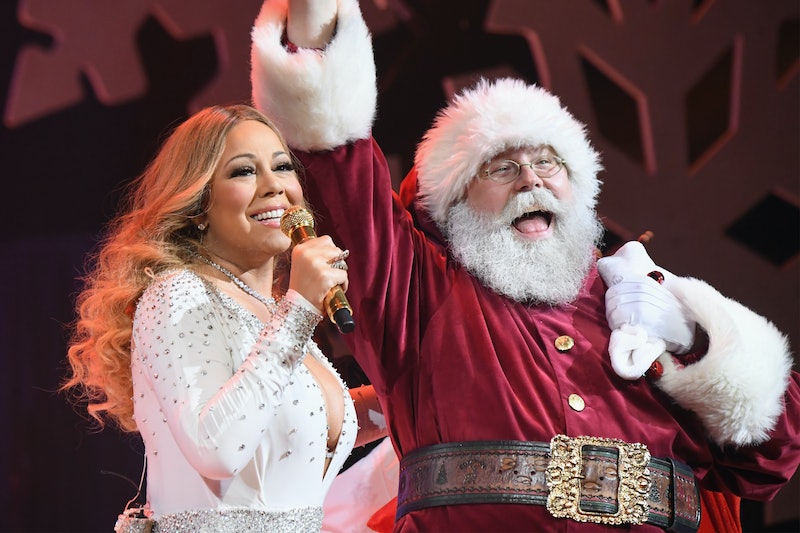 Mariah Carey is known as one of the best singers in music history, as her high register is untouchable for so many other performers. She has scored so many pop and R&B hits that it’s hard to keep track of them all, and she still ranks as one of the most successful names of all time on the Billboard charts.

These days, Carey is also thought of as the Queen of Christmas, a title she has earned thanks in large part to just one single. While the focus is always on her generation-defining smash “All I Want for Christmas Is You,” the legendary musician has actually written and recorded quite a few original holiday tunes, and so far she’s shared a pair of albums that feature her own works as well as new renditions of the classics.

READ NEXT: 12 Best Covers Of “All I Want For Christmas Is You”

While millions may only be familiar with the inescapable “All I Want for Christmas Is You,” there is so much more to enjoy when it comes to Carey and the jolliest day of the year. Here are all of her original Christmas songs, ranked from “worst” (but still fantastic) to best.

While Christmas does include the name Christ, not everyone who celebrates the holiday is religious. These days, Christmas has taken on a new meaning, one that doesn’t require those enjoying the season to believe in any one book, and thankfully, Carey’s output in this space recognizes both those who stick to the traditional meaning of the day as well as those who don’t.

“Jesus Born on This Day” is explicitly Christian in nature, and it is a well-made modern interpretation of a retelling of the birth of the son of God. It’s a big number, and it’s great to hear the superstar expressing her faith in such a manner. While the tune is reportedly a favorite of co-writer and producer Walter Afanasieff, it isn’t for everyone, based on its subject matter.

Just as “Jesus Born on This Day” might not be the right fit for every Carey fan, the same can be said for the song “One Child,” which is also religious in nature. The track, featured on the singer’s second holiday full-length, Merry Christmas II You, offers a retelling of the birth of Jesus (yes, another) and is subdued and reverential. Featuring a children’s choir and a slow-but-steady drummer boy beating away, “One Child” is still lovely, and it’s sure to be a favorite for some of Carey’s more pious followers.

Of all the songs on this list, “Miss You Most (At Christmas Time)” is the one that sounds most like a typical Carey single. The ballad is slow and sad, and every line is punctuated by the performance of one of the greatest voices of all time in her prime. Released as the first taste of the powerhouse’s Merry Christmas album, “Miss You Most (At Christmas Time)” suggested that the collection might be more somber than it turned out to be. The tune is a perfect alternative for those looking for a radical departure from the more boisterous “All I Want for Christmas Is You.”

4. “Christmas Time Is In The Air Again”

Written with hitmaker and film score aficionado Marc Shaiman, “Christmas Time Is in the Air Again” has a glorious nostalgic quality to it that so many other holiday-focused songs attempt to embody but fail to manage. The promotional single from Merry Christmas II You sounds like it could have been released decades prior, and it is a perfect example of how Carey can still make a track all her own by largely sticking to her softer, hushed voice.

Lyrically, “When Christmas Comes” is all about the holiday, with Carey crooning about mistletoe, snow, and making the world a better place. Sonically, however, it’s a soulful R&B track, and if the words had been changed, the tune wouldn’t sound out of place on a contemporary R&B star’s latest release. Easy to love, the track is a standout from Carey’s second Christmas album, and while the original is excellent, an updated version featuring John Legend may be even more popular.

When Carey began work on Merry Christmas II You, she was clearly looking to replicate the success of “All I Want for Christmas Is You,” with “Oh Santa” filling the same need on her sophomore holiday collection. The smash is upbeat and joyous, rollicking and jovial. It’s season-appropriate, and it sounds like everyone involved had a fantastic time making it.

“Oh Santa” didn’t reach the same heights as its predecessor, but that doesn’t diminish it in any respect. Years after fans first danced to the tune, Carey re-released it as a collaboration between herself, Ariana Grande, and Jennifer Hudson, making it less a song and more of a must-hear event from three of the best vocalists of the modern era.

In a ranking of Carey’s original holiday songs, there can be no discussion about which title lands at No. 1. “All I Want for Christmas Is You” isn’t just one of the greatest modern holiday singles, it ranks as one of Carey’s best creations, and, expanding beyond that, one of the most universally adored (not to mention successful) tracks of all time. It’s not just a wonderful composition for once a year — it’s a once-in-a-generation hit that unites millions. Everyone knows the words. Everyone sings along. Everyone wants to hear it again, no matter how many times it’s already been played that season.

From the moment the first xylophone note is struck, anybody within earshot immediately turns their attention to what’s playing, and for the next nearly four minutes, nothing else matters. “All I Want for Christmas Is You” is up there with “White Christmas,” “Rockin’ Around the Christmas Tree,” and “Have Yourself a Merry Little Christmas” (and many others) as musts on any party playlist in December. Thankfully, this single only seems to be getting bigger and bigger with each passing year, so it’s not going away anytime soon.