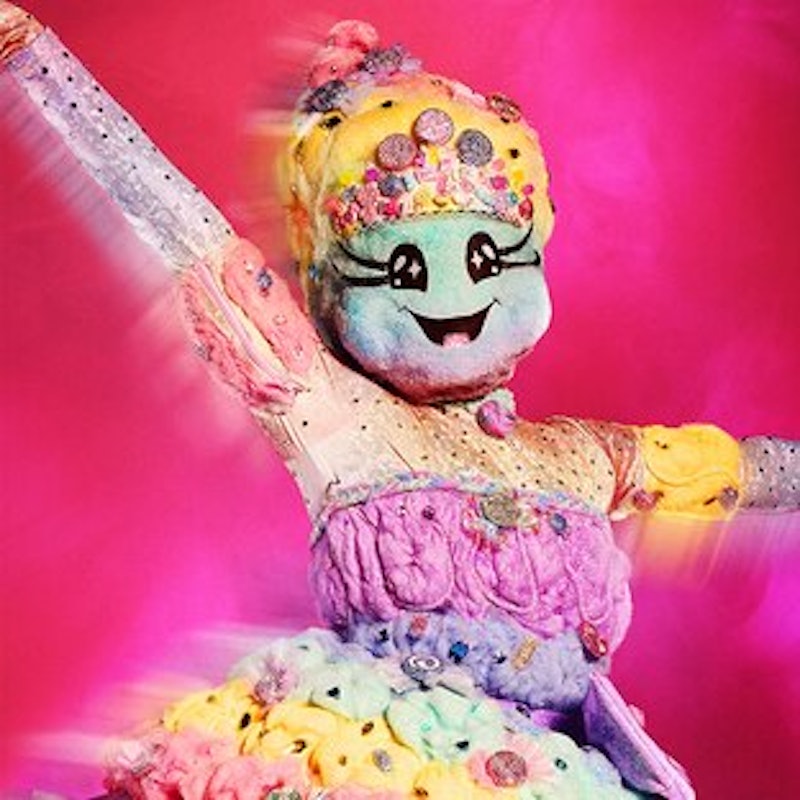 After last week's episode of The Masked Dancer, it's clear that the Cotton Candy is in this competition for the long haul. The contestant resiliently took the stage to perform "Glitter in the Air" by Pink after suffering a major fall in rehearsals for the Jan. 6 episode, earning a standing ovation from panelist Paula Abdul. After seeing the performance, judge Ken Jeong declared, "This is the most beautiful performance I've ever seen on a Masked show. It was just amazing." Ashley Tisdale agreed and said, "I think you're showing that you have a winner's attitude, and I think you're going to be here for a long time."

The show's clue package about Cotton Candy's identity described her as a perfectionist whose life "hasn't always been so sweet." After displaying a bowl of corn flakes and an English-style plate of breakfast, Cotton Candy explained that she was considered a "whiz kid" growing up, and then a wizard hat with stars and moons on it appeared onscreen. In order to achieve her dreams, she had to move in with a new family, which left her missing home and having trouble "keeping up," she said as the camera panned to an analog clock set to 11:33 — some of the numbers then swapped out to show the word "LIFE." Then the video showed Cotton Candy lifting weights with the number "3" printed on them before she shared that her fan base makes her feel "more glamorous than ever." Any guesses yet?

Finally, viewers saw some confusing visual clues: a tray of cupcakes decorated with eyelashes and lips and a cloud shaped like a bird with "B!RD" written on it. After her performance, Cotton Candy revealed her real voice during "Word Up," in which her clue word was "primetime." The Masked Dancer judges and fans alike have offered up some potential guesses, and these are the most popular theories:

"This is someone who's a classically-trained dancer, right, Paula?" asked Ken Jeong. Abdul responded, "It takes a trained dancer to be able to put that extra emotional connection, and I don't know many people that can do something like that other than maybe my friend Jenna Dewan."

Dewan began her career as a dancer for Janet Jackson in the early 2000s before going on to work with Missy Elliott, Christina Aguilera, and Pink — which would explain Cotton Candy's song choice for last week's episode. She also starred in Lifetime's Witches Of East End, which tracks with the wizard hat and "primetime" clues. Additionally, Dewan was a varsity cheerleader in high school and might be familiar with lifting three-pound weights to keep her muscles toned.

Brian Austin Green guessed Cotton Candy was a performer who can dance "with a lot of confidence." Due to the "B!RD" clue, he thought the woman behind the costume must be Pink, who also styles her name with an exclamation point. The singer would also make sense considering Cotton Candy did an aerial act to "Glitter in the Air" that was reminiscent of Pink's performance of the track at the 2010 Grammy Awards. Though, dancing to your own song would be a bit on-the-nose, even for The Masked Dancer.

Jeong said the wizard hat clue led him to think Cotton Candy could be Selena Gomez, who starred on Disney Channel's Wizards of Waverly Place for four seasons, which sort of fits the "primetime" clue. That said, Jeong's guesses were hilariously rarely correct on The Masked Singer, so it may be best to hold off on placing bets on this theory.

After flirting with his first guess, Jeong added that Cotton Candy's dancing made him think of Julianne Hough, who's earned three Emmy nominations and one win for her work on Dancing With The Stars. That achievement could also explain the "3" printed on the dumbbells. Tisdale then pointed out that Hough also fits the wizard hat clue as Julianne and her brother, Derek Hough, appeared as extras in the first Harry Potter film.

She also fits the difficult childhood and English breakfast clues because Hough's parents sent her and Derek to London as kids to study dance. Hough previously alleged that during that time, she experienced mental and physical abuse.

While none of the judges guessed that Olympic gymnast Gabby Douglas could be behind the Cotton Candy costume, fans believe it could be her. A Twitter user pointed out that Douglas had to leave home as a kid to train for the Olympics with a family in Iowa, which fits the difficult childhood clue. The "3" on the weights could match up with her three Olympic gold medals, and the English breakfast clue could hint at how she also won her first medal at the 2012 Olympics in London.

The cupcakes with eyelashes and lips seem to reference Douglas' 2017 collaboration with Beauty Bakerie. And the gymnast also appeared on a Corn Flakes box back in 2012, which makes her the only celebrity guess to fit that clue. Finally, the "primetime" clue could be a reference to the Olympics television broadcast.

While we can't make the call for sure, most of the signs point to Cotton Candy being Douglas. To find out, tune into The Masked Dancer, which airs Wednesdays at 8:00 P.M. EST on Fox.

More like this
'Bachelorette' Vet Clare Crawley Revealed Her Stunning Wedding Photos
By Stephanie Topacio Long
Everything To Know About 'RHOSLC' Season 4
By Jake Viswanath
'RHOSLC’s Heather & Whitney Are Still On A “Friendship Break” After Season 3 Reunion
By Jake Viswanath
RHOP’s Robyn Dixon Explained Why Juan Paid For Another Woman's Hotel Room
By Brad Witter
Get Even More From Bustle — Sign Up For The Newsletter
From hair trends to relationship advice, our daily newsletter has everything you need to sound like a person who’s on TikTok, even if you aren’t.