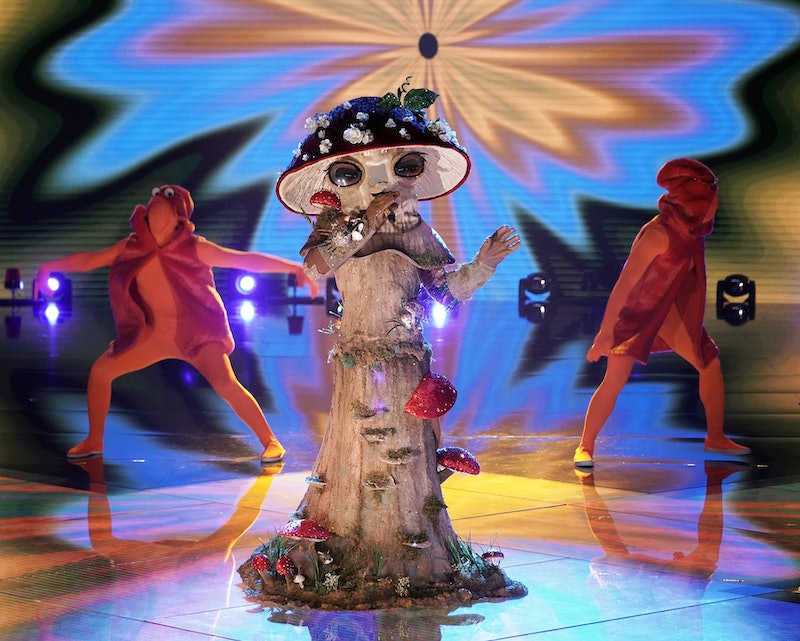 The Masked Singer is a theatrical production at its core, so it's unsurprising how often Hamilton gets brought up. The judges guess someone from the musical's cast every season, and already there are theories that Group B's Serpent is Leslie Odom Jr. Group C introduced yet another possible Hamilton alum with Mushroom, but is his clue package an obvious homage or a clever misdirect? Once you read these Masked Singer Mushroom theories, you may want to rewatch Hamilton on Disney+ to see for yourself.

Much like when Seal competed as the Leopard in Season 2, the judges initially believed Mushroom was a woman until he sang "This Woman's Work" (written by UK singer Kate Bush but popularized by Maxwell) in a breathy falsetto. The strong performance suggested a singer familiar with the stage, and Mushroom's clue package all but cemented that the contestant is a Hamilton alum: though each of the clues are maddeningly obscure, they're pretty obvious riffs on the musical's lyrics.

Based on his body type and tone, the judges guessed that Mushroom is Anthony Ramos, who played the dual role of John Laurens and Philip Hamilton in the original Hamilton run. But as ScreenRant pointed out, it's more likely that Mushroom is Jordan Fisher, who took over the role after Ramos and has a similar build. The To All the Boys I've Loved Before actor got his start on the Disney Channel show Liv and Maddie, which is likely what the "rat race" and the mouse ears refer to in Mushroom's clue package. Fisher is also an avid Twitch streamer, which lines up with the "turning my hobby into a career" clue. But the biggest giveaway is that he once sang "This Woman's Work" at a party, and well, if you close your eyes it sounds exactly like Mushroom.

Of course, this could all be a way for Mushroom to mislead audiences, as clues packages are rarely that obvious. (Remember, Wayne Brady had the judges believing he was an X-Men actor all the way until his Fox mask came off!) Other judge theories included Childish Gambino and Usher, and fans on Reddit suggested soul singer D'Angelo or Todrick Hall. Like Fisher, Hall is also a Broadway actor, and Reddit user TheMomDotCom89 noted that the flower fields in Mushroom's clue package could be a reference to Hall's favorite film, The Wizard of Oz. Pose's Billy Porter is also a popular theory, with Reddit user sues2nd suggesting that all the obvious Hamilton references may just refer to Porter's own time on Broadway. "The 'shroom' clue matches the name of the record label his first album was released on, 'sh-k-boom'," they wrote. "His odd job that was referenced could be when he worked at an amusement park."

These are all compelling theories, but right now, it's hard to deny the evidence from Fisher's video.