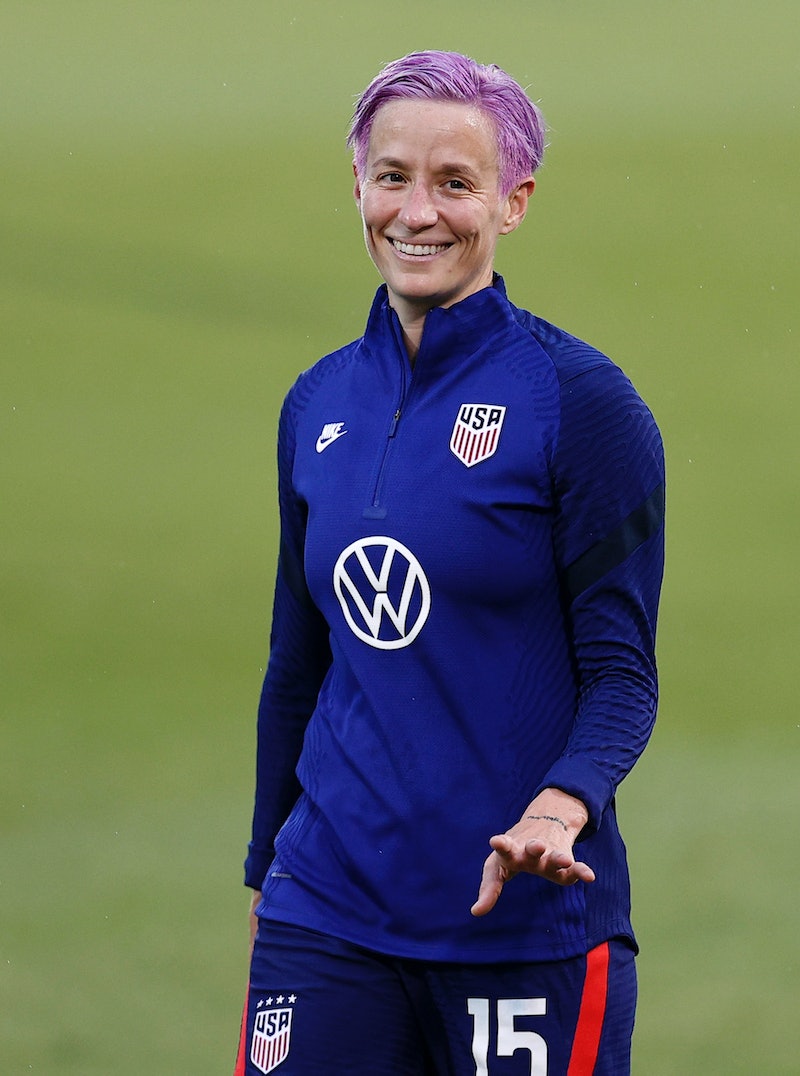 International soccer star Megan Rapinoe’s meteoric rise to fame can be traced back to the 2012 Olympic Games. Leading the U.S. Women’s National Soccer Team to victory that year, Rapinoe was immediately thrust into the spotlight, fielding high-profile interviews, a number of lucrative endorsement deals, and even a cameo television appearance on The L Word: Generation Q.

With this year’s Summer 2021 Tokyo Olympics, the decorated soccer player and her U.S. teammates will have the global spotlight on them once again. Still, there’s a lot to catch up on when it comes to Rapinoe’s resume, including the multiple teams she’s on and all the fantastic content from the published author’s Twitter account. Here’s a dive into the Victoria’s Secret spokesperson’s athletic prowess, activism, and more.

Rapinoe is not only co-captain and forward player for Team USA, but she’s also the captain and a forward for the OL Reign professional women’s soccer team based in Tacoma, Washington. She’s been an integral part of both units and has made both teams undeniable forces in the soccer world. In 2015 and 2019, Rapinoe assisted in winning the FIFA Women’s World Cup tournaments, and OL Reign is currently ranked number nine within the National Women’s Soccer League. Even though she took a break from playing for OL in 2020 due to the COVID-19 pandemic, Rapinoe has expressed her enthusiasm for reuniting with her teammates for the 2021 season.

“I’m really excited to get back in the NWSL,” she told SB Nation in February. “Obviously, I took all the time that I could possibly take last year, but I think it did me really did do me well. I think the NWSL and all the teams and players have done an incredible job with all the protocols and keeping everybody safe, so I’m looking forward to getting back with the team.”

Rapinoe competed in the 2012 and 2016 Olympic Games and scored a gold medal with Team USA during the former event. (They placed fifth in 2016.) With the 2021 Olympics ahead, the soccer team could be the first in history to win at the Olympics and World Cup back-to-back. With teammate Crystal Dunn stating how much of an “incredible achievement” that would be, per People, Rapinoe revealed that being able to rest for a whole year ahead of the Games could prove advantageous in reaching that goal.

She said, “Some players played a lot, went overseas. Some players, like myself, took more time for themselves, time that we never really get to get our bodies right and to just have that break. I think of all the teams, we probably would benefit the most just because we would have been so tired, particularly after all the wildness after 2019.”

Rapinoe’s social media accounts are filled with pictures and statements dedicated to her standout athleticism. However, there’s just as much — if not more — content that shows her passion for activism. The openly gay athlete, who is engaged to WNBA player Sue Bird, became the “first out gay” swimsuit model for Sports Illustrated in 2019 and knelt during the National Anthem several times as a show of support for former NFL quarterback Colin Kaepernick. Rapinoe’s condemnation of social ills (racism, sexism, anti-LGBTQ+ sentiments, to name a few) is proudly displayed throughout her Instagram and Twitter accounts.

For instance, Rapinoe voiced her distaste for track-and-field star Sha’Carri Richardson’s suspension from competing in the Tokyo Olympics after testing positive for marijuana. “This is trash. Standing with @itskerri. This has BEEN outdated,” she tweeted in July. Rapinoe’s Instagram page also features many pictures regarding her support of the Black Lives Matter movement, LGBTQ+ rights, and saving the United States Postal Service.

Rapinoe definitely knows how to commemorate her and her team’s wins with spirited celebratory moves on the soccer field. During the 2019 World Cup, she did an open-armed pose towards fans that elicited a fervent response. There are also numerous times when the superstar genuinely embraced and smiled with her teammates after a goal. When Team USA takes the field beginning July 21, watch out for Rapinoe’s skills and hopefully some hard-earned celebrations.