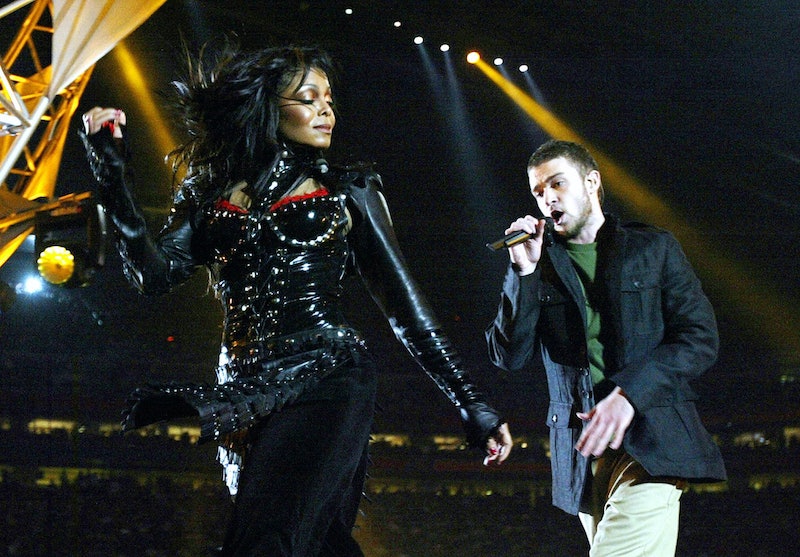 Janet Jackson and her fans have waited a long time for vindication following her Super Bowl Halftime Show wardrobe controversy involving Justin Timberlake in 2004 — not that she should’ve needed it. And that’s exactly the point of the new documentary Malfunction: The Dressing Down of Janet Jackson, which premiered on Nov. 19.

Following the success of two documentaries on Britney Spears’ controversial conservatorship — Framing Britney Spears and Controlling Britney Spears — FX, Hulu, and The New York Times Presents’ latest collaboration examines the aftermath of what’s known as “Nipplegate.” Misogyny and racism take center stage in the doc’s retelling, highlighting how a Black woman was vilified versus how a white male who did the undressing was catapulted to even greater success.

Jackson talked to Oprah about the incident in 2006, clarifying that she did not, in fact, intend to expose her breast to all of America, as some harshly insinuated. Meanwhile, though Timberlake acknowledged to MTV that he received only “10% of the blame,” he waited until 2021 to apologize. On Feb. 12, he wrote via Instagram, “I am deeply sorry for the times in my life where my actions contributed to the problem, where I spoke out of turn, or did not speak up for what was right. I understand that I fell short in these moments and in many others and benefited from a system that condones misogyny and racism.”

The Jodi Gomes-directed documentary features interviews with cultural critics, music executives, and sports execs, as well as rare footage. Ahead of the Nov. 19 premiere, fans were already looking forward to Jackson reclaiming her narrative and for Timberlake’s turn to be vilified. (The hashtag JusticeForJanet even gained traction.) Following Malfunction’s release, Twitter was collectively enraged.

So many tweets were directed towards Timberlake and his role in Jackson’s plummet. Particularly, how he both profited from the incident and mocked it for years to come.

A video clip of Timberlake even surfaced where, during a performance of “Role Model,” his 2011 collaboration with FreeSol, he reenacted the notorious moment — all while rapping to his lyric, “Maybe you're right, maybe I'm an asshole. Oops, did I take it too far? Super Bowl.” “When Justin Timberlake capitalized Janet Jackson's misfortune,” someone tweeted.

Others couldn’t help but point out similarities between society’s treatment of Jackson and Spears.

One of the biggest takeaways for some viewers was that Timberlake wasn’t alone in contributing to Jackson’s career nosedive. The role of former CBS CEO Les Moonves, who faced allegations of sexual assault and harassment in recent years, also featured prominently in the doc.

Even more celebrities who ridiculed the “Rhythm Nation” performer following her malfunction were included, leading a viewer to tweet, “So I just finished an FX documentary about Janet Jackson’s career before and after the superbowl incident and it doesn’t shock me that a lot of black men joined in on the mocking, clowning, ridiculing and public shaming of Janet.” Fans also added the NFL, CBS News, and MTV to the growing list of those who owe Jackson an apology.

Others couldn’t fathom how Jackson’s breast, which was exposed for 9/16th of a second, led to 17 years of turning Jackson into a musical pariah as well as dedicated documentaries dissecting the incident.

One tweet, in particular, got Twitter users collectively riled up — and it’s not from anyone you’d expect. Following the Super Bowl debacle, the Grammys infamously disinvited the “All For You” singer, despite being slated to present. So when the official Grammys Twitter account promoted the Hulu doc with the caption, “The 2004 #SuperBowl halftime show incident wasn’t just an unfortunate slip-up — it was a confluence of raging societal forces,” fans were quick to point out the post’s irony. “Well if this isn’t the pot calling the kettle black,” user NathanGroce replied.

The one voice notably absent from the doc is Jackson’s. The New York Times Presents’ documentaries typically don’t interview the artists themselves and Malfunction is no different. Naturally, fans are keen to hear from the “Feedback” singer herself via her own co-produced documentary, Janet, out in Jan. 2022.

However many docs people choose to watch, one thing is clear: society owes Jackson a huge apology.

More like this
Pamela Anderson’s Dating & Marriage History Could Be Its Own TV Series
By Jake Viswanath
'That '90s Show' Star Callie Haverda Got Advice From Mila Kunis & Ashton Kutcher
By Brad Witter
Ashton Kutcher Wants Danny Masterson “To Be Found Innocent” In Rape Retrial
By Jake Viswanath
At 28, Debra Jo Rupp Was Living A Much Different '70s Show
By Grace Wehniainen
Get Even More From Bustle — Sign Up For The Newsletter
From hair trends to relationship advice, our daily newsletter has everything you need to sound like a person who’s on TikTok, even if you aren’t.