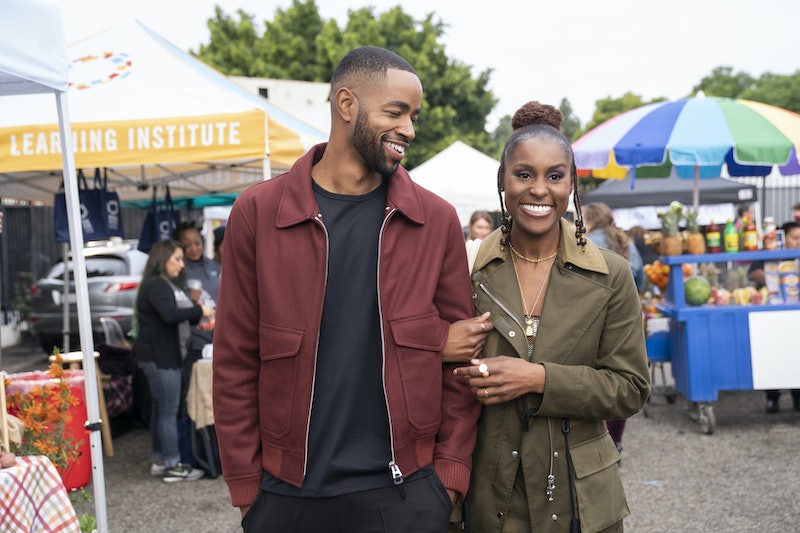 Over the course of Insecure’s five seasons, fans have had thoughts about Issa Dee’s love interests. Though the series kicked off with Issa (Issa Rae) living with boyfriend Lawrence (Jay Ellis), the mirror-rapping protagonist soon strayed with her longtime “friend with benefits,” Daniel (Y’lan Noel). Thus kicked off a series of situationships, breakups, backslides, and some major lessons learned. Heading into Insecure’s series finale, Lawrence and Nathan (Kendrick Sampson) seem to be the last men standing, though it’s anyone’s guess which coupling might be endgame.

Deciding who Issa ends up with in the final episode also elicited “very strong opinions” within the Insecure writers’ room. “We had a lot of conversations. We did a lot of voting,” Rae told Vogue in October. “There was a lot of butting heads, so I don’t know who is going to be satisfied by this ending. I don’t think we’re going to satisfy anyone. You can’t. You can’t satisfy everyone, but there was a lot of discussion and a lot of personal change that happened throughout the season. I, as a writer, changed my mind a lot, and that will be reflected.”

She’s certainly had a few options over the past five years. From “TSA Bae” to Daniel, here’s a definitive ranking of Issa’s leading men.

Newly single Issa finally put herself back out there and planned to meet sexy Tinder match Felix (Broderick Hunter) for the first time at a Season 2 party. Any potential romance was over before it even began, though: Felix immediately criticized Issa’s hair and voice, before leaving her alone at the backyard bash. So much for Issa building that “ho-tation” roster.

There’s no shame in a less-than-ideal rebound, right? After Lawrence moved out of their shared apartment — and Issa needed to move on — she decided to satisfy her sexual urges with Eddie (Leon Thomas III), her downstairs neighbor at The Dunes. Both seemed clear that the relationship was strictly physical, so Issa couldn’t exactly fault her easy lay when she showed up and another woman was in his apartment. Regardless, the lackluster Season 2 hookups were short-lived — and probably for the best.

Another Season 2 Tinder date, Ben (Luke James) showed promise, but essentially fell victim to bad timing. Issa wasn’t really over Lawrence and hadn’t quite figured out how to pull off the whole “ho phase” thing. Her and Ben’s makeout session may have moved to the bedroom, but they never quite went all the way. The reason? Issa couldn’t stop nervously giggling whenever he touched her. After getting dressed to make a quick exit, she delivered the hilariously awkward line, “Thank you so much for your hospitality.”

By Season 4, Issa finally found someone who showed some promise beyond a casual fling in friendly neighbor Calvin (Reggie Conquest), better known as “TSA Bae.” OK, so he wasn’t exactly Issa’s type, but he — gasp — seemed to care about her. When she threw her first block party, he provided free security and even recruited more attendees. “Calvin is a break from Lawrence and the other guys,” Conquest explained to BET in 2020. “One time I saw The Shade Room post the characters Issa’s been with on the show as ‘Snack, Lunch and Dinner.’ If they’re the snack, lunch and dinner, Calvin is the cheat meal.”

Issa and Nathan’s relationship may have gotten progressively more serious throughout Season 5, but who can forget the heartbreak he caused when he ghosted her? Nathan certainly earns a level of forgiveness for later explaining a mental health crisis led to his unexplained absence, but the Houston-born barber has continued to exhibit some major red flags. Without the same history Issa has with some of her other options, Nathan has given more cause for concern than could likely satisfy fans with less investment and so little time left in the series.

Since Noel’s character hasn’t appeared on the HBO series since Season 3, it would take a major plot twist for Daniel and Issa to get back together at this point. Even so, the man behind that steamy Season 1 affair — and that seriously unfortunate sexual mishap — was friends with Issa before their romance, and they remained so after it ended. Possibly because he’s had less time to mess up, Daniel has long been, not only at the top of many fans’ lists, but on Rae’s as well.

“I have been Team Daniel,” she revealed in the October Vogue interview. “As an artist, I identify with his insecurities, his pride. I do think that he tried to be there for her, and it mirrors a relationship I’ve had in the past. There’s just a soft spot in my heart for Daniel, but I don’t think, at that time, he was right for her, and I think that she was right to move on from him to stand on her own two feet. I’ve been Team Lawrence; I’ve been Team Nathan; I’ve been all over the map.”

Perhaps the most debated of all Issa’s relationships has been the roller coaster with Lawrence. Were they in the right place to be together in Season 1? No. But they’ve both grown leaps and bounds since then, and are truly thriving in their own ways. Despite their professional and personal successes, however, they are the missing pieces in each other’s lives — and they both know it. Condola’s (Christina Elmore) surprise pregnancy might have spoiled Issa and Lawrence’s beautiful Season 4 reunion, but this is the love story Insecure has been following since Day 1, and there’s still hope they can once again rekindle their old flame.

More like this
'The Crown' Season 6 Has Suspended Filming "Out Of Respect" For The Queen's Death
By Bustle Staff
At 28, Rosie Perez Risked Her Career To Stop Playing Stereotypes
By Gabrielle Bondi
Here’s Everything Coming To & Leaving Netflix In February
By Jake Viswanath
At 28, Debra Jo Rupp Was Living A Much Different '70s Show
By Grace Wehniainen
Get Even More From Bustle — Sign Up For The Newsletter
From hair trends to relationship advice, our daily newsletter has everything you need to sound like a person who’s on TikTok, even if you aren’t.