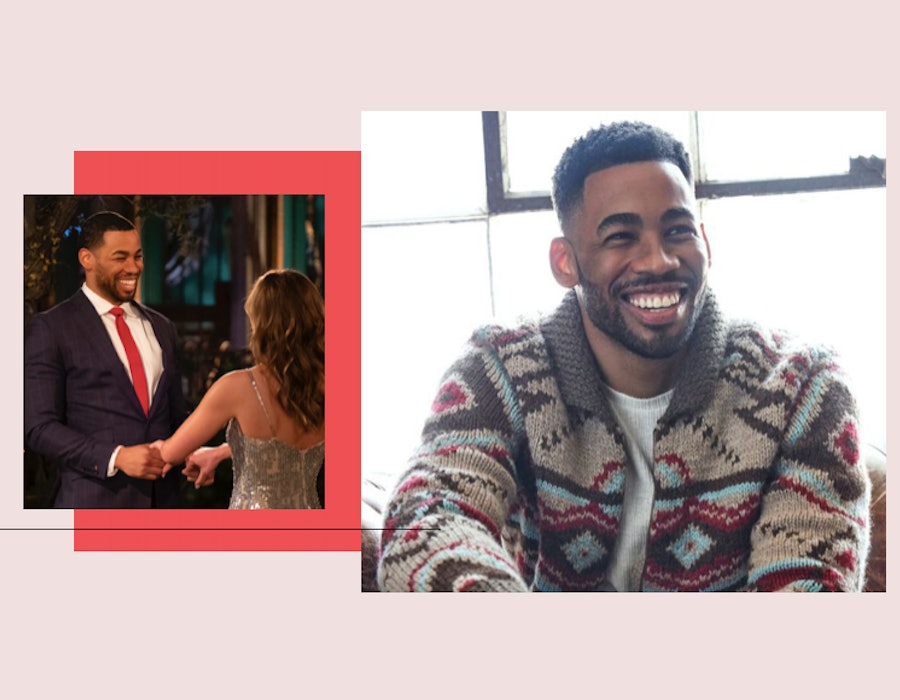 Let's be honest: the majority of people who go on The Bachelorette end up leaving with a broken heart and some Instagram sponsorships. While that's true of former Bachelorette contestant Mike Johnson, he also left the Bachelor mansion with something he considers far more important — a greater sense of self. "I went on TV to find love, but I already had love," he tells Bustle, noting how his reality TV experience taught him the value of self love. It's part of what inspired him to write Making the Love You Want, his new book that aims to teach readers how to love themselves, while illuminating how he became the man who — according to his rabid fanbase — should have been the next Bachelor.

While the book doesn't go into detail about his time on The Bachelorette or Bachelor in Paradise, it does give plenty of new insight into Johnson's life, discussing his past issues with depression, and his childhood sexual assault. "I know people may know me from reality TV, but quite honestly, my goal was to have this book reach people that don't even know who I am," he explains.

For those who do know who he is, the book might come as a surprise. Recent Bachelor alums are more likely to start a podcast after leaving the show than to write a self-help book that barely touches on the franchise. But then again, nothing about Johnson's post-Bachelorette trajectory has been what fans expected. After stealing the show during Hannah Brown's season, many fans and alums like Rachel Lindsey and Kendall Long petitioned for him to be the next Bachelor, which would have made him the first Black Bachelor in the show's 24 season history. But other Bachelor Nation alums were skeptical. After Peter Weber was chosen to be the Bachelor instead, former Bachelorette contestant and Bachelor in Paradise bartender Wells Adams implied that Johnson hadn't proven his ability to carry a whole season, telling Entertainment Tonight, "I think what people fail to grasp is you have to build a show around that person, and I don't know if he's ready for it," he said. ABC's VP of Alternative Series Rob Mills echoed this sentiment, telling Variety, "We think Peter was the strongest option, we felt he was the guy who would give us the best 22 hours of television."

When I mention these reasonings to Johnson, he laughs loudly. "Quote me that I laughed when you said that," he says, still chuckling. "I'm just as confused as the rest of America that adores me," he adds of losing out on the Bachelor gig. And while he won't close the door on ever taking up the role in the future, he's not waiting by the phone. "I love myself and I am not holding my breath for anything." As for whether he thinks he was held to a higher standard than his white counterparts, he doesn't mind. "I want to be held to the highest standards," he says. "I know for a fact, and I'm pretty sure that everyone who loves me knows that I can carry a show on my own."

In the meantime, Johnson is happy to watch Clare Crawley — and the still unconfirmed Tayshia Adams — lead The Bachelorette. While he insists he doesn't know anything more than we do about the rumors that Tayshia will be taking over as the Bachelorette midway through the season, he thinks she'd be perfect for the job.

"[Tayshia's] like a sister. I think she's a freaking amazing woman," Johnson says. "She really wants to be in love and the way she thinks is very logical. She doesn't jump to conclusions. I think that she is a good Bachelorette." As for Matt James, who will be the first Black Bachelor, Johnson's advice for him is to try not to worry about hurting others in the process. "I would say, 'Bro, treat those ladies like your mom taught you, and know that this is about you. This is the one time you can be selfish to find your love and make sure that you do that."