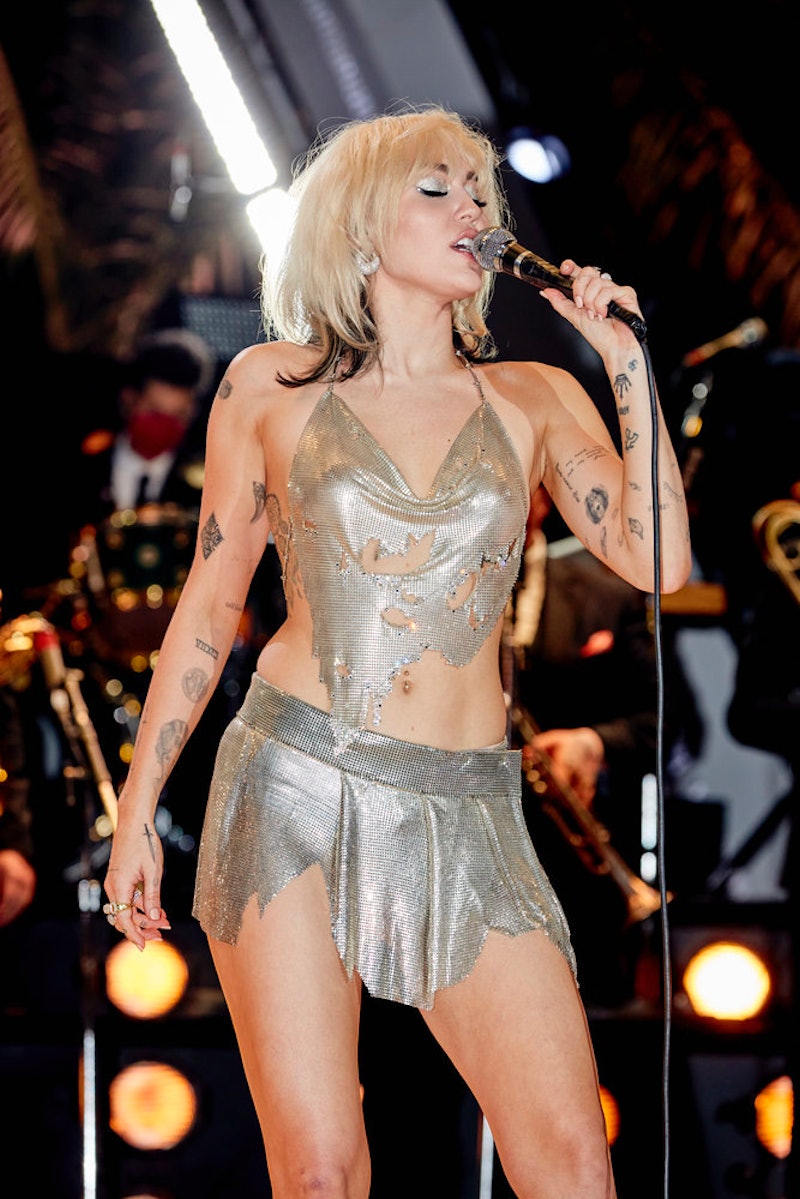 Look, any New Year’s Eve party hosted by Miley Cyrus and Pete Davidson was always going to be a little chaotic — and minutes after midnight, that expectation was met (and exceeded) in the best possible way. It all started during the countdown portion of Miley’s New Year’s Eve Party on NBC, where Cyrus’ shiny, two-piece outfit was more Times Square Ball than “Wrecking Ball.” (Which is a good thing, because the Miami-based event didn’t actually feature a ball drop, but a champagne pop from a jumbo, light-up bottle.)

Cyrus, still wearing the glittery ensemble, jumped into a performance of “We Can’t Stop” followed by a fan-favorite throwback, “Party in the USA.” But the transition wasn’t without some technical (er, sartorial) difficulties. By the beginning of the second song, Cyrus was singing with her hand on her chest to keep her top in place — but before she could even get to “fame excess,” she gave up and turned her back to the audience, letting the top drop altogether as she danced off stage.

Fortunately, her backup singers provided some much-needed, well, backup, all until Cyrus made a triumphant return to the stage in time to finish the chorus. Hilariously, the new outfit wasn’t that much more secure — rather, she threw on a red blazer from earlier in the show, this time wearing nothing underneath.

Cyrus acknowledged the awkward situation as she continued her performance and made a few fun lyrical additions. “Get to the club in my taxi cab / Everybody’s definitely looking at me now,” she sang. “Who’s that chick that’s rockin’ kicks? / I’m still in the most clothes that I’ve ever worn on stage.”

Soon, Saweetie joined Cyrus on stage for “Best Friend,” and the shimmery slip-up was temporarily forgotten — but the evening’s host went on to reference it in her parting words for the show. “Tonight’s show was all about being flexible,” she said. “Rolling with the punches, and making the best out of even the worst circumstances. And that resilience shouldn’t end here. Let’s bring that into the new year with us. We’ve all learned how to expect the unexpected. And rather than see it as a problem, let’s see it as an opportunity.”

This has to be a good sign, right? Leave it to Cyrus to turn a chaotic wardrobe moment into a heartwarming mantra for 2022.