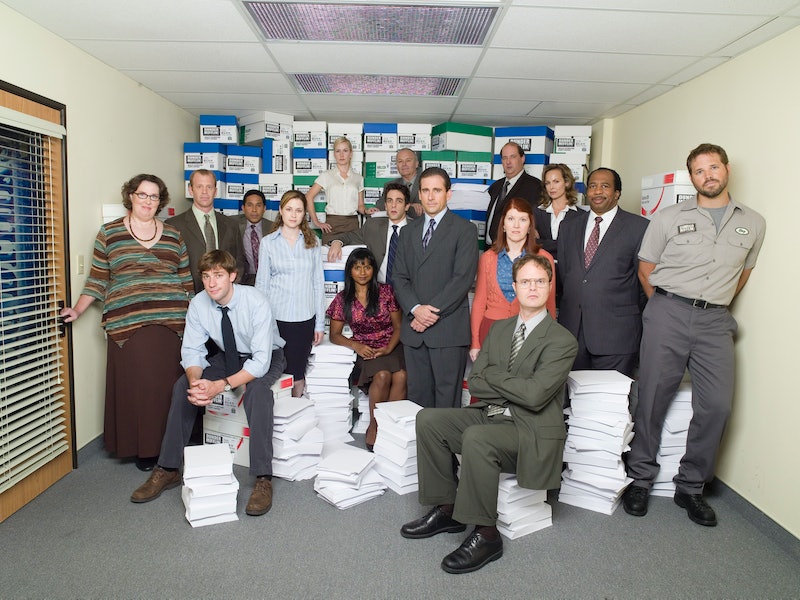 Michael Scott wouldn’t last in today’s climate. During a Dec. 5 interview on Good Morning America, The Office star and writer Mindy Kaling said she doesn’t think the hit sitcom would be as accepted by the public today, in part due to its political incorrectness and racy humor. “That show is so inappropriate now,” she said. “The writers who I'm still in touch with now, we always talk about how so much of that show we probably couldn't make now. Tastes have changed, and honestly what offends people has changed so much now.”

The actor touched on what she thinks her beloved character Kelly Kapoor would be up to today, and said that most of the employees at Dunder Mifflin Paper Company would share the same fate in 2022. “I think she would have quit Dunder Mifflin to become an influencer, and then probably be canceled almost immediately,” she quipped. “Actually, most of the characters on that show would be canceled by now.”

That said, she credits that same inappropriate humor to explaining why viewers love The Office so much. “I think that actually is one of the reasons the show is popular, because people feel like there's something kind of fearless about it or taboo that it talks about on the show,” she said. However, it’s also the same reason why she won’t let her children watch the show. “I kind of think maybe never,” she clarified.

The Office, a spin-off of the British series of the same name starring Ricky Gervais, premiered in 2005 and ran for nine seasons before concluding in 2013. Throughout its tenure, the show picked up 42 Emmy nominations, with five wins, and became a star-making vehicle for its cast and writers, including Kaling, B.J. Novak, John Krasinski, Jenna Fisher, Rainn Wilson, Angela Kinsey, and longtime lead Steve Carrell. That being said, it doesn’t sound like anyone is interested in rebooting the show anytime soon.

In 2018, five years after the series finale, Carrell told Collider that he shut down the possibility of appearing in an Office reboot, despite the show’s popularity rising since its end. “I’ll tell you, no,” he said. “I just can’t see it being the same thing, and I think most folks would want it to be the same thing, but it wouldn’t be. Ultimately, I think it’s maybe best to leave well enough alone and just let it exist as what it was... But I love the show. It was the most exciting time, and all of those people are my friends.”

Even The Office creator Greg Daniels has said a reboot is not likely to happen, despite part of him wanting it to make one because they couldn’t get the entire cast back. “I loved doing The Office more than anything. And if we were going to revisit it, I would want to do it,” he told TV's Top 5 podcast in 2020. “I don't think people's expectations of getting back in the saddle and doing more episodes of the same show was going to be realistic.” At least we still have every episode streaming on Peacock.

More like this
Ashton Kutcher Wants Danny Masterson “To Be Found Innocent” In Rape Retrial
By Jake Viswanath
New Details About Jeremy Renner's Snowplow Accident Reveal The Actor's Intentions
By Sam Ramsden
Everything To Know About 'And Just Like That...' Season 2
By Jack Irvin and Grace Wehniainen
This 'One Tree Hill' Wardrobe Error Is Going Viral On TikTok
By Brad Witter
Get Even More From Bustle — Sign Up For The Newsletter
From hair trends to relationship advice, our daily newsletter has everything you need to sound like a person who’s on TikTok, even if you aren’t.