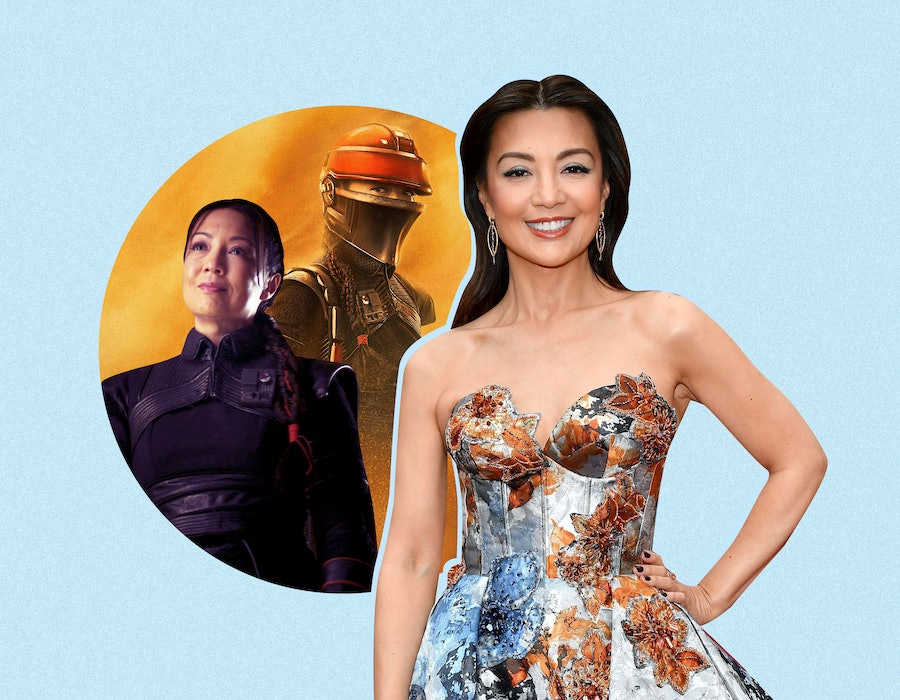 Ming-Na Wen has been crying. This morning, she saw her Book of Boba Fett character Fennec Shand standing proudly alongside other beloved Star Wars characters on the front of Lucasfilm’s 50th anniversary card and burst into tears. “I printed it out because I was so excited,” Wen says, leaning out of frame to grab the card and giddily holding it up to the camera.

Playing an iconic character isn’t new for Wen. Printouts of the famous roles the 58-year-old has embodied throughout her four-decade career could paper a wall: The Joy Luck Club’s grieving June, Street Fighter’s Chun-Li, the title character in Disney’s animated Mulan. In the last year alone, she’s been named a Disney Legend, made BBC’s list of 100 inspiring and influential women, and received a 2022 Hollywood Walk of Fame star alongside Star Wars alums Ewan McGregor and Carrie Fisher.

But Wen is only beginning to reckon with her level of fame and impact after years of downplaying her success as owing to luck or circumstance. “My friend always slaps me about that, with her words,” Wen jokes. “She's like, 'It's not luck!' My mother-in-law does it too.” Wen attributes this tendency to being raised in an Asian household, where she was constantly taught to be humble and grateful. Now, she’s trying to give herself credit “without sounding like a braggart.” She smiles coyly, as if letting me in on a secret: “Yes, I worked my ass off,” she finally admits.

“Pretending to be someone else was a lot easier than being one of the few Asian kids in school.”

Growing up in Pittsburgh after emigrating from Hong Kong, Wen was a bit of a loner in school. There weren’t many Asian kids, and she had a slight New York accent from the ESL classes she took when her family briefly lived in the city. While her parents ran their Chinese restaurant the Chinatown Inn, she immersed herself in fictional universes, imagining she was a heroine in a galaxy far, far away. “That's why I gravitated towards things like Star Wars. It was pure escapism for me,” Wen says. “Pretend[ing] to be someone else was a lot easier than being one of the few Asian kids in school.”

Acting proved to be a similar outlet, and after starring in high school plays, Wen attended Carnegie Mellon University’s School of Drama, where she survived a training program so rigorous that she was one of only 18 students out of 65 freshmen to complete it. “They don't do that [program] anymore,” Wen says. “Which is very nice, because it does destroy one's confidence.”

The harsh training from her college years gave her a certain degree of fearlessness — even if she may not call it that — and Wen pursued her career doggedly, becoming the first Asian American series regular on the long-running soap opera As The World Turns not long after graduating. If someone in the audition room wasn’t convinced of her talents, she’d do everything to make them change their mind: She won the role of June in The Joy Luck Club by giving the director an impassioned 45-minute speech about why she felt a kinship with the character; when the producer on Street Fighter doubted that Wen was fierce enough to play Chun-Li, she started doing kicks in his office.

“I went out into the world thinking, 'I can play any role. I just need to be given the chance to be in the room with these people and show them,’” Wen says. “It was naïveté, really.”

I say it sounds like confidence. “Yes,” she adds. “A little bit of both, yes.”

Fennec’s continued existence in the Star Wars universe is a testament to Wen’s persistence. Though the character was introduced in The Mandalorian Season 1 as a one-off antagonist who is later killed by a blaster, Wen successfully campaigned for Fennec’s resurrection in Season 2, which snowballed into a larger role on The Book of Boba Fett. The Disney+ series marks the second time an Asian woman has been cast in a major role on a Star Wars production — a particularly huge feat given the ageism older women still face in Hollywood. “It’s been four decades of me dreaming about being in some Star Wars project,” Wen says. “It’s a bit surreal.”

Fennec, like Wen, has a quiet tenacity: She spent years in the shadows as a bounty hunter before becoming Boba Fett’s right hand woman, often saving him from diplomatic snafus and assassination attempts as he works to become the new crime lord of Tatooine. She’s comfortable pulling the strings, if not quite taking all the credit.

“I really admire who Fennec is because there are so many attributes about her that I wish I did have,” Wen says. “She's fearless. She’s extremely skilled at her profession. And she's very honest.”

She pauses for a moment. “Oh, well, I guess those are my attributes.”

More like this
Who Is 'Stranger Things 4' Fan-Favorite Joseph Quinn Dating IRL?
By Grace Wehniainen
Here's Why You'll See Less Of Olivia Rodrigo In 'HSMTMTS' Season 3
By Bustle Editors
Sadie Sink Would Escape Vecna From 'Stranger Things' With This Taylor Swift Song
By Grace Wehniainen
Everything We Know About When To Expect The Rest Of The Upshaws Season 2
By Kadin Burnett
Get Even More From Bustle — Sign Up For The Newsletter