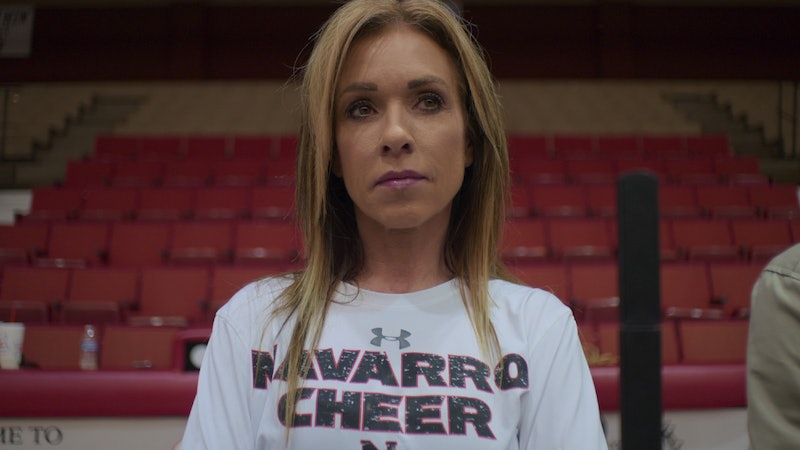 There’s a lot to love about Monica Aldama, the Navarro College cheer coach who helped the Bulldogs achieve mainstream acclaim (including a Saturday Night Live spoof) through the Netflix docuseries, Cheer. She’s a Swiftie. An accomplished MBA. A real mom to her family and a figurative one to her team — basically, she’s the cheer world’s answer to Friday Night Lights’ Coach Taylor.

Though Aldama’s students regularly gets to hear her words of encouragement (and, sometimes, tough love), you don’t need to enroll at Navarro and herkie your way onto the team to reap the benefits. Here are some of Aldama’s best quotes to inspire you as you dive into Cheer Season 2.

Aldama shares these words of wisdom early in Season 1 of Cheer, and they perfectly encapsulate the kind of coach she is. It’s not enough to nail a routine or tricky maneuver once or twice. To get it right on every subsequent try? Now that’s something. While Aldama’s words were meant for the high-stakes world of competitive cheer, they can just as easily apply to your own life — whether it’s a new hobby, like learning how to cook, or getting into a rhythm at your job. Really, this is just a grown-up version of “practices makes perfect,” and that old adage is true as ever.

“If you don’t have failure, you don’t grow. You tend to stay complacent.”

Of course, that’s not to say Aldama condemns failure on the road to that perfection — rather, she finds it pretty essential. In a Jan. 4 appearance on Good Morning America, the coach praised the benefits of messing up. “If you don’t have failure, you don’t grow,” she told Michael Strahan. “You tend to stay complacent.” With a Season 2 trailer that references rival Trinity Valley’s plans to “destroy” Navarro, it looks like the Bulldogs could be at risk of learning a lesson in failure firsthand very soon.

“Every place that you can find to mat talk them, do it.”

As the team prepares for the first full-out in preparation for Daytona in Season 1, Aldama encourages the cheerleaders to, well, cheer each other on. “Every place that you can find to mat talk them,” she says, “do it.” If you’re not brushed up on your cheer vocab, “mat talk” is when teammates hype each other up during a routine — basically, any supportive words they can throw at someone who’s potentially unsure, or exhausted, or just deserves a shoutout to remind them they’re doing great.

Aldama’s quote here can be just as inspirational to those who’ve never played any part in a pyramid — that is, the non-cheer citizens of the world. Who couldn’t use some more encouragement in their day-to-day life?

“Who knows what it takes to actually ‘make it’? I’m still working on it and am definitely proud of the positive stepping stones I’ve hit along the way.”

Cheer’s success on Netflix made celebrities out of Navarro’s team and its fearless leader — but in a 2020 interview with Insider, Aldama said she still isn’t sure if (or when) she’s achieved her greatest success. “Who knows what it takes to actually ‘make it?’ I’m still working on it and am definitely proud of the positive stepping stones I’ve hit along the way,” she said.

“I didn’t inherit some great program. It was a lot of blood, sweat, and tears.”

You should never be afraid to take credit for the amazing stuff you’ve done. Aldama isn’t! As she told Texas Exes, building her team in the late ’90s was no small feat. Well before Navarro’s current acclaim, she started with students from the college weight room (they’d be strong enough to throw their teammates, she explained), and worked her way up the pyramid. “I didn’t inherit some great program,” she said. “It was a lot of blood, sweat, and tears.”

Here’s to even more Aldama wisdom in Cheer Season 2, which is now available on Netflix.