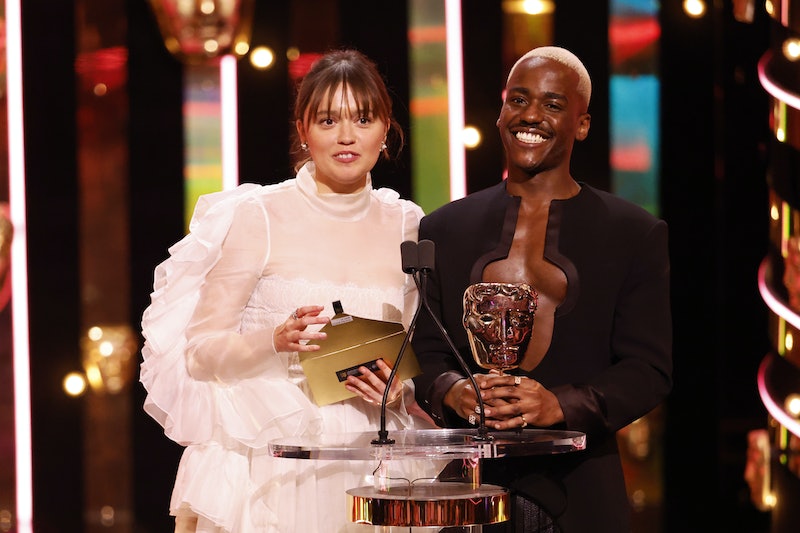 Guy Levy/Shutterstock for BAFTA
By Sophie McEvoy
May 9, 2022

It’s official: The future is here, and the next Doctor Who will be Ncuti Gatwa. Revealed just before the BAFTAs began at the Royal Albert Hall on May 8, Gatwa was understandably buzzing on the red carpet before the ceremony. Calling it a “true honour,” Gatwa expressed how important his turn as the Doctor will be not only for him, but for viewers too. “It means a lot to so many people including myself and so it makes everyone feel seen as well,” he said. “It’s something everyone can enjoy so I feel very grateful to have had the baton handed over and I’m going to try do my best.”

While Jodie Whittaker has yet to comment, she’s reportedly “so happy” that Gatwa will be her successor, according to Russell T Davies, who accompanied Gatwa on the red carpet. “We’re not giving anything away yet, Jodie’s still the Doctor,” he explained. “We love Jodie, we spoke to her yesterday. She’s so happy about this, but we’re going to keep quiet. It’s all going to happen in 2023.” Davies will be returning to helm Doctor Who after leaving the series in 2010.

Following the excitement on the red carpet, Gatwa took to the stage to present the award for Best Scripted Comedy with his Sex Education co-star Aimee-Lou Wood. In response to Gatwa’s casting as the Doctor, Wood set up a classic knock-knock joke that had the audience in stitches.

Wood couldn’t have looked prouder of her co-star, initially reacting to the announcement on her Instagram stories by saying she was “crying” at his casting as the new Doctor. Over on Twitter, Gatwa’s on-screen BFF Asa Butterfield called his co-star “the most deserving man out there”, with many of his other co-stars also taking to social media to celebrate.