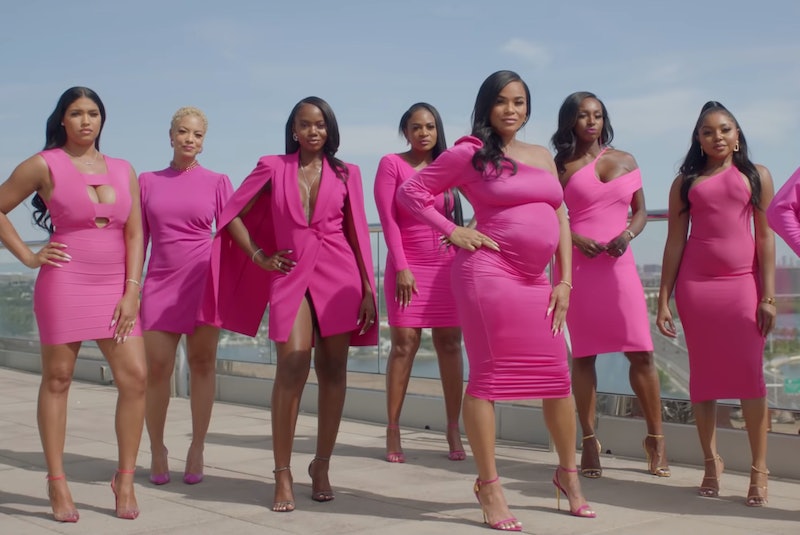 Unlike Selling Sunset Season 4’s 30-minute episodes, each episode of Selling Tampa Season 1 will run for 45 minutes over eight episodes instead of the typical 10. Here’s everything to know about the new Selling Tampa spinoff, including who to look forward to in the team navigating Florida’s luxury market.

Selling Tampa will follow the ongoings at Allure Realty, according to the logline from Netflix. It reads, “Sharelle has big plans for her brokerage and won’t let anyone or anything get in the way of making her dreams a reality.”

The original series is rife with agents uber-competitive in both career and love. As to what kind — if any — love entanglements viewers will witness on Selling Tampa, Netflix promises that the women we’ll meet are “equally as fun as they are fiercely ambitious,” with “all of them vying to be on top” of the real estate game. So it should make for some good, high-intensity TV.

As the boss, Rosado will be a mainstay among other realtors from the group, which will include Alexis Williams, Anne-Sophie Petit-Frere, Colony Reeves, Juawana Willaims, Karla Giorgio, Rena Frazier, and Tennille Moore. Most of them list their occupations on their social media handles as real estate agents, while Frazier is both an agent and a lawyer. Meanwhile, Moore also self-describes as a “Certified Credit Repair Specialist.”

Though young, Allure Realty has been garnering awards and recognition — it was even nominated for the “Best Real Estate Company” honor during Best of the Bay 2021. When it comes to the realtors themselves, they’ve celebrated their own individual wins as well. Last October, cast member Petit-Frere posted, “Cheers to making it to the list of top 5% of realtors nationally for the first half 2021.”

Selling Sunset, currently on its fourth season, is so successful it spawned two spinoffs: Selling Tampa and the newly-announced Selling the O.C. Unlike Tampa, Selling the O.C. will see Jason Oppenheim return onscreen as the big boss overseeing his agents and the deals brokered through his company. It’s unclear if the series will feature an entirely new roster of realtors (Heather Rae El Moussa already put her foot down about not leaving the original), but we do know Alexandra Hall, Austin Victoria, and Brandi Marshall will star. There’s no release date for the O.C. series just yet.

The wait isn’t long now. Right after Selling Sunset’s fourth season drops on Nov. 24, the debut season of Selling Tampa will premiere on Netflix just a couple of weeks later on Dec. 15. Along with the Selling Sunset trailer came a teaser for Selling Tampa. In it, Oppenheim is shown surrounded by his Cali-based agents, all decked in white. He then throws keys to Rosado, in head-to-toe pink, just like the agents beside her.

On Nov. 30, Netflix released the official trailer for Selling Tampa, and subscribers are in for a treat as the agency dominates the Tampa luxury market “closing deals in heels.” Already, there’s drama as one of the agents contemplates leaving the brokerage and starting her own.

More like this
Everything To Know About 'Selling The OC' Season 2
By Brad Witter
'Bling Empire: New York’ Star Tina Leung Has A Superhero Alter-Ego
By Alyssa Lapid
'Love Is Blind: After The Altar' Season 3 Has A Release Date & It's Very Soon
By Grace Wehniainen
Everything To Know About A Potential 'Bling Empire: New York' Season 2
By Gretchen Smail
Get Even More From Bustle — Sign Up For The Newsletter
From hair trends to relationship advice, our daily newsletter has everything you need to sound like a person who’s on TikTok, even if you aren’t.

This article was originally published on November 22, 2021