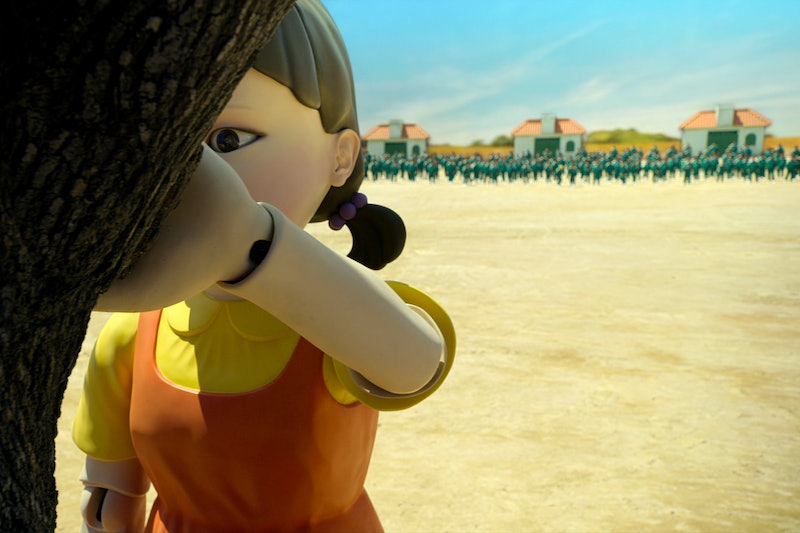 Spoilers ahead for Squid Game Episode 1. Based on the show’s sheer popularity, there’s a good chance you’ve already watched Squid Game on Netflix. Even if you haven’t, the memes are on their way to your FYP as we speak. The Korean thriller-slash-social commentary is the latest Netflix original to transcend the streamer and take on a life of its own on social media. Remember the Bridgerton musical? Or those TikTok dances set to dialogue from Outer Banks?

Squid Game is on a whole new level, though, and might even surpass Bridgerton as Netflix’s “biggest show ever,” according to Netflix co-CEO Ted Sarandos. With great viewership comes great meme potential, of course, and Squid Game viewers have wasted no time spoofing the show’s disturbing premise since it first premiered on Sept. 17. TikTok seems particularly drawn to one character from the show. No, not one of the games’ very desperate players, but the robot doll who helms the first fatal game of red light, green light.

The 10-foot-tall girlboss has appeared everywhere — from your nightmares, probably, to a real-life Philippines shopping mall where she threatens to eliminate pedestrians who enter the crosswalk when it’s not their turn.

And now, she’s at home on your TikTok FYP. Here, you may see her in animated, 3D form — as Insider reports, a user named punyaibenk first posted a video of the robot doll dancing on Sept. 25, and fellow users have since set the footage to a variety of songs. Other TikTokers simply joke about how they might fare in the fatal game. In a hilarious interview with Vulture, the “real” robot doll even opened up about how she’s dealing with the newfound attention and playing such a polarizing character. “I know a lot of people might see her as the villain,” she said, “but I didn’t approach her that way ... It’s a rich role. I mean, before this, I often got typecast as a cute, dumb doll.” Oh, and she may be dating Jigsaw of Saw fame.

Now that you’ve had a chance to get to know the doll a bit better, here are some of the top Squid Game robot doll TikToks to enjoy before your rewatch.

The dancing doll was too much for TikTok alone, and Twitter users had fun setting her to a new soundtrack.

More like this
TikTok Pointed Out A Major 'Emily In Paris' Continuity Error
By Sophie McEvoy
All The ’70s Easter Eggs You Missed In 'That ’90s Show'
By Grace Wehniainen
'The Crown' Season 6 Has Suspended Filming "Out Of Respect" For The Queen's Death
By Bustle Staff
Ozzie’s Coming Out Scene With Kitty On 'That ’90s Show' Has Twitter Sobbing
By Brad Witter
Get Even More From Bustle — Sign Up For The Newsletter
From hair trends to relationship advice, our daily newsletter has everything you need to sound like a person who’s on TikTok, even if you aren’t.