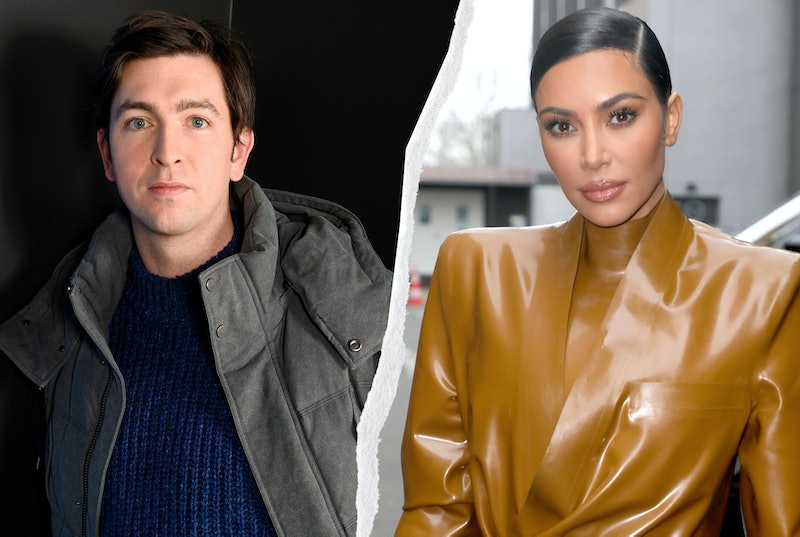 Just three days following the official announcement that Kim Kardashian is filing for divorce from Kanye West, applications for the reality TV mogul's next S.O. are coming in. On Feb. 22, Succession actor Nicholas Braun posted a video to his Instagram page in which he jokingly publicly asks Kardashian if she's looking to "take a shot on a new guy" just yet. Hey, it's 2021. Anything is possible.

“It hurts to think about how they’re feeling and how she’s feeling, I mean, I’m wondering at this point, where do they even go from here? Where does she go from… at this moment,” wondered the 32-year-old actor, sporting a cream turtleneck sweater. “Cause she’s been through three marriages now, and it’s like, are you willing to even take a shot on a new guy at this point? Would you be down to meet a new person, totally just kind of different guy?” The three marriages of Kardashian's that Braun mentions include Damon Thomas (2000-2004), Kris Humphries (72 days in 2011), and of course, West (2014-2021).

Describing an eligible bachelor who sounds a lot like himself, Braun hilariously continued his joke: “[She should date] one who can make you laugh a little bit, or make you feel small cause he’s so tall. Just a guy who’s talking about her on the internet. A guy who makes a video like this and he’s sort of like trying to find a way to just talk to her because he doesn’t know anybody who knows her,” he added before suggesting Kardashian would think, “Hmm, this is kind of different. This guy is odd, but maybe in a good way.”

Braun plays Greg Hirsch on HBO's Succession, which was renewed for Season 3 in March 2020, though it's faced production delays due to the COVID-19 pandemic. In July 2020, the Emmy-nominated actor released a pandemic-inspired song called "Antibodies." He opened up to Bustle about the song and dating amid the pandemic the same month.

"It's interesting going on dates with bandanas on, with masks on, and [realizing] all the normal stuff where you might sit close to each other at a restaurant, you might put your arm around them or something, that all of that is gone until date three, four, until you feel like OK, I can get close to this person, and they can get close to me," he said. "There’s a new fear of human contact, so it just changes it, which I think is really interesting. It sort of forces you to get to know somebody better before you go in for a hug... or something more."

Perhaps his playful Kardashian bit will actually be the first in a series of hopeful steps for the pair to get comfortable enough to see each other in person. Good luck with that!

More like this
Kanye West Apologizes To Kim K "For Any Stress I Have Caused" In Rare Interview
By Jake Viswanath
Kanye West Revealed The High Percentage Of Time Kim Kardashian Raises Their Kids
By Brad Witter
Gigi Hadid’s Dad Shared What He Knows About Those Leonardo DiCaprio Rumors
By Brad Witter
Who Is Nick Cannon Dating & How Many Kids Does He Have?
By Jordyn Tilchen and Radhika Menon
Get Even More From Bustle — Sign Up For The Newsletter