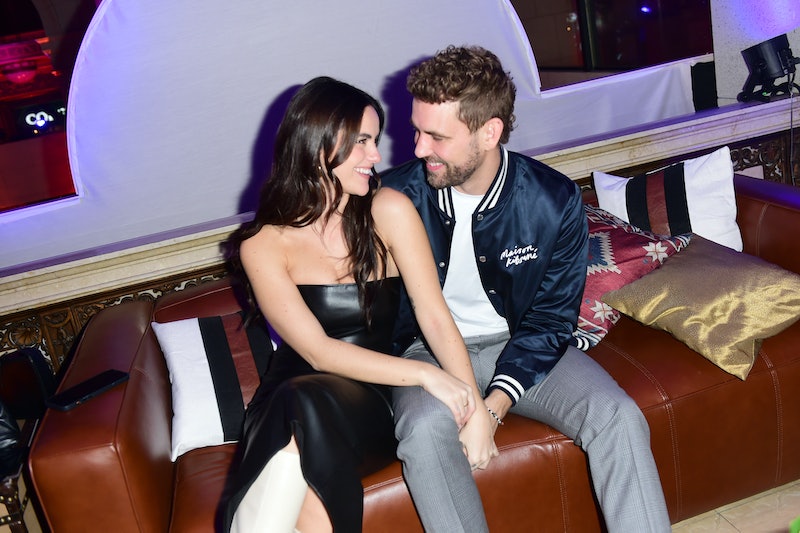 With a new season of The Bachelor coming soon, Bachelor Nation is gearing up to witness Zach Shallcross find The One this January. But it seems like the fandom already has a lot to celebrate with a former lead finally finding someone to give his rose to. After four painfully-public attempts at finding love in the franchise (twice on The Bachelorette, once on Bachelor in Paradise, and again on his own season of The Bachelor), Nick Viall is happily engaged to Natalie Joy, his girlfriend of over two years who famously isn’t from the reality show world.

On Jan. 12, the pair announced their engagement on Instagram. “For the rest of my life, it’s you,” the couple shared in a joint post that featured several photos — all highlighting the ring. Viall also shared one of their engagement photos on his Instagram Stories and he already penned a sweet vow. “Going to love you forever,” he wrote.

Bachelor franchise alums including Jesse Palmer, Greg Grippo, and Serena Pitt sent their love and well wishes to the happy couple. Even Viall’s ex-fiancée Vanessa Grimaldi congratulated the couple in the post’s comment section. Viall was previously engaged to his Bachelor season winner, but the pair split up five months later, in August 2017. The two are famously still friends.

The pair first sparked dating rumors in 2019 and again when they made their relationship IG-official in January of 2021. A month later, Viall, spoke about how he met the surgical technician who worked on the frontlines during the lockdown. “She slid into my DMs,” he shared during an episode of his The Viall Files podcast. “It was very romantic.” He also gushed about his then-girlfriend, saying, “It sounds so cheesy … but she does make me want to be better.” He added, “Without question, everyone likes her more than me. All of my friends. Without question. And it makes me a little bit insecure about myself.”

Though they initially kept their relationship under wraps, both Viall and Joy have been sharing sweet, gushy posts on Instagram. On Oct. 3, 2022, Viall even called their romance “the relationship of his dreams.” He wrote, “I wanted to share with you how lucky I feel to be loved by this woman. From the moment I met her, it was clear to how much she prioritized making people loved ... My greatest wish for everyone is that they get to feel the type of love that I have been so lucky to feel from her.”

Viall also regularly features on Joy’s Instagram. In March of 2022, Joy gushed about Viall with a little help from a Nicki Minaj lyric. “No i’m not lucky i’m blessed,” she wrote. Meanwhile, a couple of months prior, she referred to Viall as her “baby daddy.”