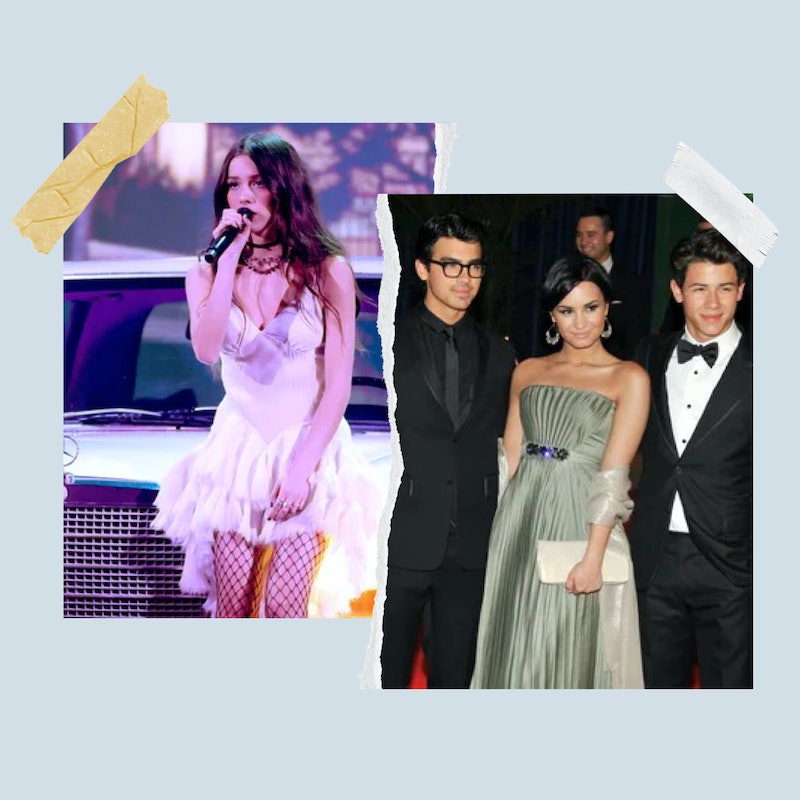 Before becoming a Disney star, Olivia Rodrigo was a Disney Channel stan. To celebrate the start of her long-awaited Sour Tour, Rodrigo took to Instagram to share a throwback photo of her younger self on stage performing classic Disney Channel hits from the Jonas Brothers, Demi Lovato, and more. Needless to say, the Disney alums approved of her song selections.

In the throwback picture, Rodrigo’s setlist was written on a whiteboard, which included the JoBros’ hits “S.O.S.,” “Year 3000,” and “When You Look Me In The Eyes,” as well as Joe Jonas’ Camp Rock duet with Demi Lovato, “This Is Me.” Kevin Jonas commented, “Solid set list,” while Joe also wrote “Set list!” with a fire emoji. Lovato replied with a weary face and pink heart emoji before sharing the photo on their Instagram Story, remarking that “this pic is warming up my frozen lil heart.”

The “drivers license” singer juxtaposed the adorable flashback with a video of the crowd loudly singing her Grammy-winning breakout song at one of her recent shows, depicting just how far she’s come in the past year. “Tour is going gr8,” she captioned the post.

Rodrigo’s adolescent self also had pictures of the JoBros, Lovato, and a particularly huge poster of Hannah Montana hanging on the walls, proving her fandom. Other anthems on her setlist included Corbin Bleu’s “The Boys Are Back” from High School Musical 3 (she seemingly forgot Zac Efron is also on the song), Billy Ray Cyrus’ sentimental ballad “Ready, Set, Don’t Go” from Hannah Montana, and a kid-friendly cover of Gwen Stefani’s “Hollaback Girl” from former cover group Girl Authority, who still has an active Twitter account that was “shook” by Rodrigo’s inclusion.

Ever the loyal Swiftie, she also had Taylor Swift’s 2008 hits “Love Story” and “Picture to Burn” on her playlist. While fans are having fun screaming the words of her own hits like “good 4 u” at her shows, Rodrigo should consider mixing in some of these nostalgic covers on her Sour Tour setlist.

More like this
The Jonas Brothers' New Album Has A Very Meta Name
By Alyssa Lapid
Cruz Beckham Teased New Music With An Adorable Nod To Mom Victoria Beckham
By Stephanie Topacio Long
Britney Spears Shares & Deletes Photos Of Justin Timberlake From 22 Years Ago
By Jake Viswanath
Brad Pitt Wants To Share The Spotlight With This Celeb In Shania Twain’s “That Don't Impress Me Much”
By Alyssa Lapid
Get Even More From Bustle — Sign Up For The Newsletter
From hair trends to relationship advice, our daily newsletter has everything you need to sound like a person who’s on TikTok, even if you aren’t.