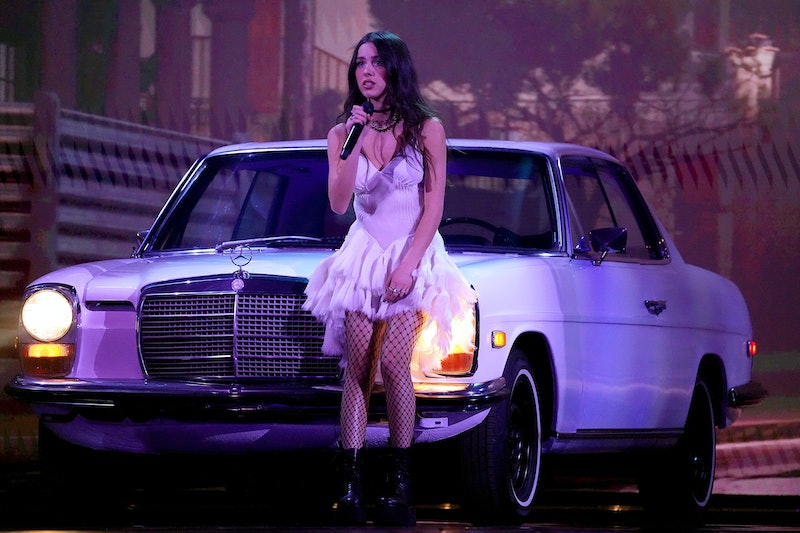 Olivia Rodrigo is finally on tour, which means fans can collectively cry their hearts out to “drivers license” live instead of alone in their cars. The 19-year-old superstar, who recently won three Grammys for Best Pop Vocal Album, Best Pop Solo Performance, and Best New Artist, announced the 2022 Sour World Tour on Dec. 6 to continue promoting her record-breaking (and highly quotable) debut album. “SOUR TOUR IS FINALLY HAPPENING,” she wrote on Twitter, revealing the tour dates, openers, and a tour poster that shows her hair being used as balloon strings.

The “good 4 u” singer’s first headlining tour is traveling North America and Europe during the spring and summer months of 2022. It kicked off April 2 in San Francisco and will make stops at legendary venues like New York’s Radio City Music Hall and Los Angeles’ Greek Theatre.

The Sour World Tour will cap off what has been an immense debut era for Rodrigo. Her first single “drivers license” took the music world by storm, breaking Spotify records in its first week and topping the Billboard Hot 100 for eight weeks. Her accompanying album Sour produced even more smashes, including No. 1 hit “good 4 u” and the catchy “deja vu.” Billboard also crowed Sour as the second biggest album of 2021. She ended 2021 by landing seven Grammy nominations, including nods in all Big Four categories, subsequently winning three awards in April 2022.

Here’s everything you need to know about Rodrigo’s first tour.

What Is The Sour Tour Setlist?

On opening night of her long-awaited tour, Rodrigo performed the entirety of SOUR as well as a couple unexpected covers, including Avril Lavigne’s 2002 breakout hit “Complicated.” Her friend Conan Gray also joined her for an acoustic cover of Katy Perry’s “The One That Got Away” in Vancouver, meaning some shows may have special surprises in store. Later in the tour, Rodrigo added “All I Want,” her first song from High School Musical: The Musical: The Series, to her setlist.

What Are The Sour Tour Dates?

Despite her immense out-of-the-gate success likely allowing her to fill arenas already, Rodrigo is starting off a little smaller for her first tour, performing in famed theaters and music halls — albeit with multiple dates in some major cities like New York and Los Angeles.

How To Get Sour Tour Tickets

Tickets for the Sour Tour went on sale on Dec. 10 for fans who registered and received access to Ticketmaster’s Verified Fan presale. As warned by the site, the demand for Rodrigo’s tour was so “overwhelming” that no seats were left for the general public, thanks in part to her decision to play smaller venues. Resale tickets are available for select shows on Ticketmaster and Stubhub, but be warned that they’re selling for very inflated prices.

After tickets sold out in minutes, Rodrigo addressed fans who didn’t get lucky in an Instagram post. “if you weren’t able to get tickets this time around there will be more tours in the future and I can’t wait to see you then!!!” she wrote. “thank u to all my incredible fans.”

Who Are The Sour Tour Opening Acts?

Alongside the tour dates, Rodrigo also announced the special guests that will join her for the Sour tour. Gracie Abrams will open the North American shows from April 2 to 23, while Holly Humberstone will take over from April 26 to May 25. Baby Queen will be the opening act for the European and UK shows in June and July.

Abrams revealed the tour on Twitter, saying she was “screaming crying” over the chance to hit the road with Rodrigo. “I love you @oliviarodrigo this is going to be so fun,” she wrote, with several crying emojis. Humberstone also expressed her excitement for the tour on Twitter. “So gassed to be going on tour with angel @oliviarodrigo next year,” she wrote. “Think I’ll burst with excitement these shows are gonna be the best ever !!!!!!”

This article was originally published on Dec. 6, 2021