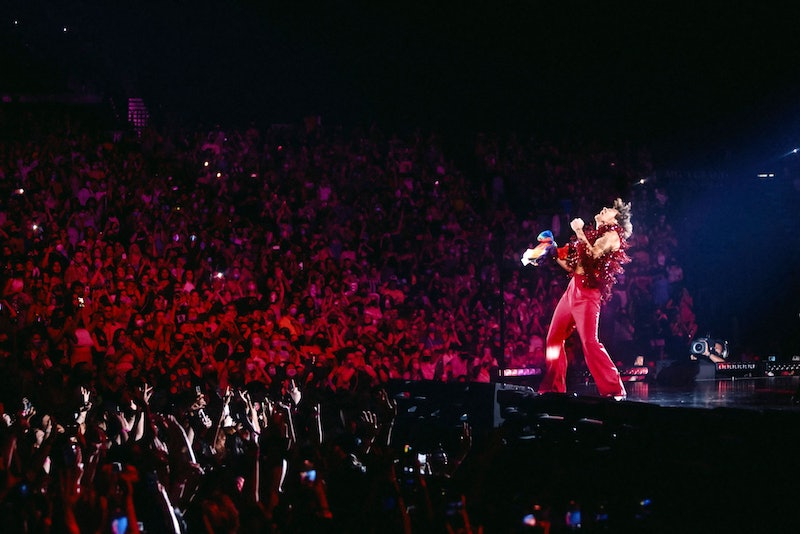 A lot has happened for Harry Styles in the three years since he last toured — not the least of which is his burgeoning film career with the upcoming Don’t Worry Darling, or his relationship with director Olivia Wilde. So naturally, when the former One Direction member made his highly anticipated return to the stage for the first stop on his Love on Tour run Sept. 4, he did so with some new company by his side.

As E! News reported, Wilde attended the Las Vegas show to support Styles, where she “was so happy and dancing all night,” and “singing along to almost every song,” a fellow concertgoer told the outlet. Videos captured by fans at the concert showed Wilde sporting a stylish baby-blue suit and enjoying the show from a backstage area. Her presence caused a stir among in-the-know audience members — as Twitter user skylerrkidd shared, fans were so caught up with Wilde’s arrival that the actor-filmmaker actually had to point at the stage to refocus their attention on Styles, who was about to make his own “magic trick entrance.” (With that much star power in one room, of course, you’re bound to get distracted once or twice.)

Despite not trying to stare too much — “it just felt like wrong” — skylerrkidd also observed that Wilde was “VIBING so hard” to “Adore You.” (And who wouldn’t?)

User goldrushkiwi could hardly grasp that they’d “breathed the same air” as the supportive star — and caught Wilde’s iconic entrance on video, too.

“Vegas, you blew me away,” Styles wrote on Twitter after the show. “I’d been waiting for that. Thank you so much for all the love, I had the time of my life with you.”

During the show, the “Watermelon Sugar” singer himself donned a shiny, hot pink ensemble — and even though he wasn’t photographed with Wilde that night, their complementary outfits just so happened to match the vibrant colors on Styles’ Fine Line album cover. TikTok user coastalcherryco was able to capture a video of Styles on stage with Wilde cheering him on in the background.

Even before they started dating, Wilde has long been drawn to Styles’ artistry and, well, style. In 2020, she told Vogue that she’d done a “victory dance” upon learning Styles was officially a go for Don’t Worry Darling.

“To me, he’s very modern,” she said in December, “and I hope that this brand of confidence as a male that Harry has — truly devoid of any traces of toxic masculinity — is indicative of his generation and therefore the future of the world ... It’s pretty powerful and kind of extraordinary to see someone in his position redefining what it can mean to be a man with confidence.”

Just like Wilde came out to celebrate Styles on his long-anticipated return to touring, you can probably expect to see a similarly sweet show of support between the pair when Don’t Worry Darling debuts next year. Though an official release date is still TBA, the Los Angeles Times reported that the drama (which co-stars Florence Pugh) will come out next year.

More like this
Everything To Know About Taylor Swift’s 10th Studio Album, 'Midnights'
By Grace Wehniainen and Jake Viswanath
Dan Levy Appears In The Latest Teaser For The Weeknd's HBO Series, 'The Idol'
By Jake Viswanath
At 28, Melanie C Was Falling In Love & Reclaiming Her Confidence
By Olivia-Anne Cleary
Beyoncé’s Special Tribute To Sister Solange Was Both Touching & Hilarious
By Stephanie Topacio Long
Get Even More From Bustle — Sign Up For The Newsletter