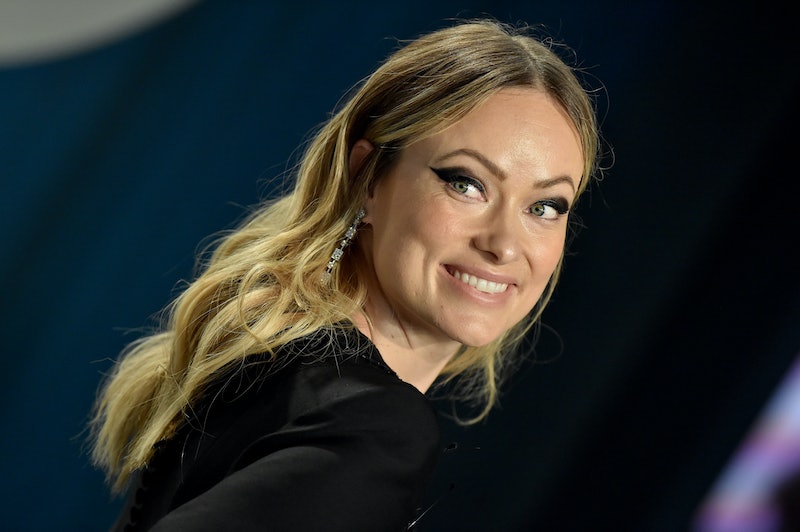 Step aside Peter Parker; it looks like there may be a new friendly neighborhood spider person in town. On Wednesday, Deadline reported that Olivia Wilde will direct a female-led superhero movie for Marvel, which is rumored to be the long-awaited Spider-woman adaptation comic book fans have been waiting for. While details about the film — which is being made in collaboration with Sony Pictures — are scarce, Wilde did seem to confirm that the project centers on the character of Spider-woman on Twitter, posting featuring a single spider emoji. (Bustle has also reached out to Wilde for comment, but did not receive an immediate response.)

Wilde is reportedly developing a "completely revamped" take on the iconic hero in collaboration with Booksmart writer Katie Silberman, and will join the small club of female directors to take on a Marvel movie, after Anna Boden (who co-directed Captain Marvel), Cate Shortland (Black Widow), Chloe Zhao (The Eternals), Nia DaCosta (who was recently hired to direct Captain Marvel 2), and S.J. Clarkson (who is rumored to be developing a Madame Web project). Wilde also reportedly almost passed on the film entirely, due to her busy schedule, but was ultimately won over by the chance to develop her own female superhero franchise.

Over the years, several iconic Marvel characters — including Gwen Stacey and Mary Jane Watson — have taken on the mantle of Spider-woman over the years, but the character is best known as the alter ego of Jessica Drew. Originally introduced in the 1970s, Jessica Drew is a bounty hunter and private investigator who was exposed to radioactive spider DNA while in utero, which gave her superhuman powers, web slinging skills and the ability to shoot "venom-blasts" of energy out of her hands.

When Jessica was first introduced in the comics, she was facing off against Nick Fury himself after her memory was erased and she had been recruited and trained by HYDRA. She ultimately left the villainous organization and joined S.H.I.E.L.D., before becoming a superhero in her own right. Over the course of the past 40 years, she has worked with and against some of Marvel's most famous heroes and most notorious villains, which could allow her to slot easily into the Marvel Cinematic Universe in the future. However, as it currently stands, Wilde's female-led film will not be part of the MCU, but rather part of Sony's own hero-centric universe.

Wilde's upcoming project isn't the only Spider-woman movie currently in the works. Back in November 2018, Variety reported that Sony was planning an all-female Spider-Man: Into the Spider-Verse spinoff film, which would focus on "three generations of women with Spidey powers." While Spider-Gwen (voiced by Hailee Steinfeld in the 2018 film) will likely be the main character of that animated movie, the outlet suggested that other arachnid-inspired heroines like Spider-woman, Madame Web and Silk could also appear in the project.

In September 2019, Collider reported that Sony was also developing a live-action film centered on Madame Web. In the comics, Madame Web is depicted as "an elderly woman with myasthenia gravis" whose life support system looks like an elaborate spider web. In May 2020, S.J. Clarkson was announced as the director of a project reportedly based on the mysterious character.

Thus far, it's unclear who is being considered to play Spider-woman on the big screen, though fans on Twitter have suggested actors ranging from Daisy Ridley and Alexandra Daddario to Naomi Scott and Ella Balinska. In the meantime, there are also plenty of fan-made Spider-woman trailers on YouTube to keep comic fans entertained until Wilde's film finally swings into theaters.