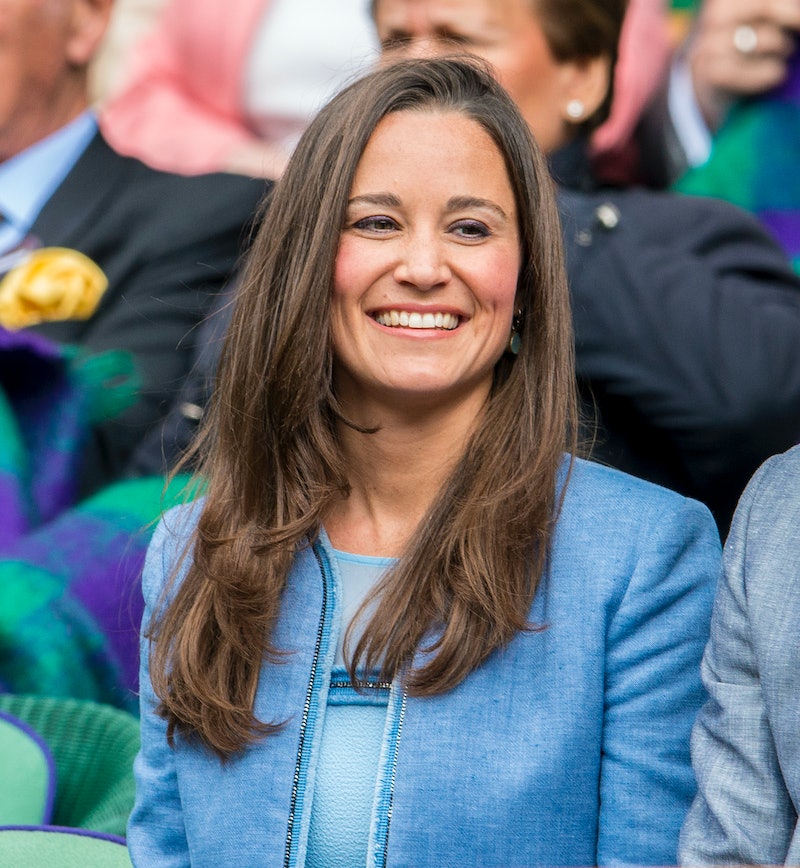 Following a few months of speculation, it's been confirmed that Pippa Middleton is expecting her second child. Carole Middleton revealed the news in a recent interview with Good Housekeeping, describing how excited she is to welcome another baby into the family.

"I hope to see more of my family than I could last year, including, of course, my new grandchild," Carole told the magazine (via OK). Describing herself as a "hands-on" grandmother, Carole explained how she hopes to keep up with her expanding family through Pippa and Kate. "I want to run down the hills, climb the trees and go through the tunnel at the playground," she explained. "As long as I am able to, that's what I'll be doing. I cook with them, I muck around dancing, we go on bike rides."

She also described how close the Middleton's are, and how integrated their family has become since welcoming Prince William and Pippa's husband James Matthews. "That is why we are all still close, because our relationship has evolved as my children have had children," Carole said. "I've learned to be a wise grandmother, I hope."

News of Pippa's secondly pregnancy was initially reported by Page Six in December 2020, with a source telling the publication that the couple were "thrilled."

Pippa and Jame's welcomed their child Arthur in October 2018. Following in the footsteps of her big sister Kate Middleton, Pippa gave birth in the Lindo Wing of St. Mary's Hospital in London.

Pippa opened up about Arthur for the first time roughly a year after the birth, sharing a sweet insight into their life via her Waitrose Magazine column: "Starting my son Arthur swimming at four months old has given him confidence and enjoyment in water," she wrote in April 2019. "He's now six months old, and swimming is one of our favourite activities. The exercise helps guarantee sound daytime sleeps, and the movement has improved his digestion. He also enjoys bath time and is more boisterous now he's more familiar with water in his eyes. Water activity is a great form of exercise you can do with your baby."

More like this
Kate Middleton Wore The Ultimate '90s Power Suit
By Sam Ramsden
Gillian Anderson's New Netflix Drama Is *Nothing* Like 'Sex Education'
By Frances Stewart
Princess Diana’s Brother Shared A New Photo Connected To Her Childhood
By Darshita Goyal
Helena Bonham Carter Doesn't Think 'The Crown' “Should Carry On"
By Sam Ramsden
Get The Very Best Of Bustle/UK
Sign up for Bustle UK's twice-weekly newsletter, featuring the latest must-watch TV, moving personal stories, and expert advice on the hottest viral buys.