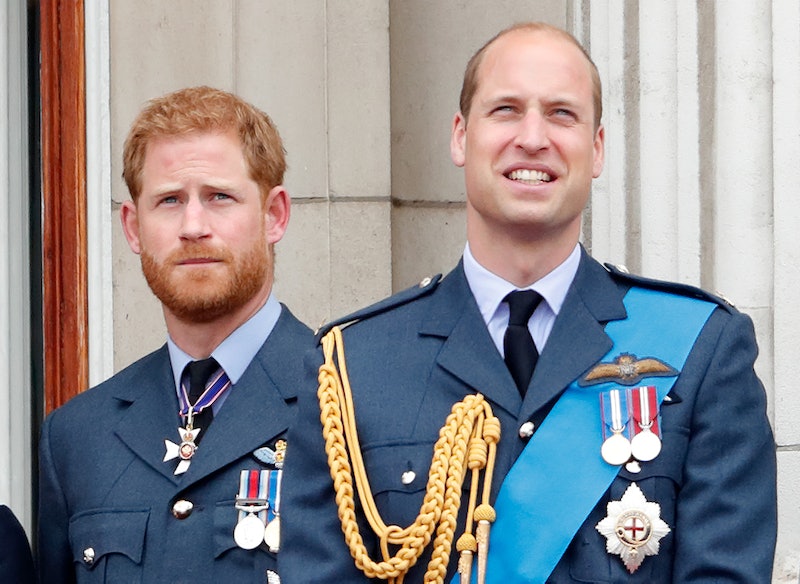 They may have celebrated Christmas on different continents, but Princes William and Harry reportedly came together from a distance over the holidays. Royal expert Katie Nicholl told Entertainment Tonight that despite the ongoing tensions between them, the brothers made an effort to celebrate together virtually, and have made strides toward repairing their relationship. "There were phone and video calls over the Christmas and New Year holiday and the Sussexes sent presents to the Cambridges and vice versa," she told the outlet.

"It was an opportunity in an otherwise very busy and chaotic year for both of the families to come together and connect, albeit virtually," Nicholl continued, before explaining that "things are a lot better between William and Harry" than they were a year ago, around the time that Harry and wife Meghan Markle announced their intention to step back as senior royals.

The brothers were "barely on talking terms" then, according to Nicholl. William apparently harbored such strong feelings of anger, disappointment, and frustration that he "couldn't even face going to that lunch" with their grandmother, Queen Elizabeth II, when the senior royals gathered at their country retreat Sandringham to discuss how to proceed. He chose only to attend the meetings, Nicholl indicated.

While Nicholl noted that many royal experts think it's unlikely that William and Harry "will ever be as close" as they once were, the brothers' relationship is getting stronger. "For a start, they are on talking terms, and not only on talking terms, they do speak relatively regularly," she said. "They were very much in touch over the holidays. But there is an ocean between them, there is a time difference and as Harry [has] said … they are two brothers on different paths."

In early January 2020, Meghan and Harry announced that they had decided to "step back as 'senior' members of the Royal Family," and planned to move to North America and become "financially independent." While their decision was controversial — both among royal watchers and within Harry's family — the Duke of Sussex explained that he felt there was "no other option" that would allow him to protect his wife and son, Archie, from the intense press scrutiny.

"The decision that I have made for my wife and I to step back is not one I made lightly," Harry said in a speech for his charity Sentebale later in January 2020. "It was so many months of talks after so many years of challenges. And I know I haven’t always gotten it right, but as far as this goes, there really was no other option."

According to Nicholl, William wasn't the only member of the royal family that Harry reconnected with over the holiday season. In addition to Prince Charles, Harry is also "in close contact with the Queen" and he and his family talk to the monarch "on a regular basis."

"The Queen has kept in close contact with Harry and Meghan for the past year," said Nicholl. "She's in touch with them, she knows what's going on in their lives, they discuss their plans with her. Harry has always seen his grandmother as a mentor and while he might be in L.A., that hasn't changed."

Despite the previous tension between him and his family, Harry is happy with his decision to move to California, according to Nicholl. While his family doesn't seem to be quite as thrilled, it does sound like they're getting on board. An unnamed source recently told Us Weekly that the bothers hope to be able to visit each other when travel is safer. "At some point in 2021, the Cambridges will travel to Santa Barbara and see the Sussexes on their new home turf," the source said.

For now, phone and video calls between the families will have to do.