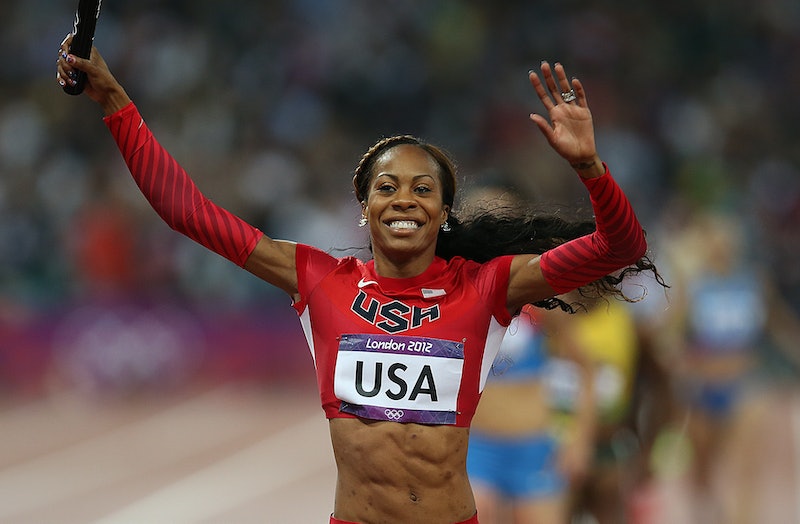 Real Housewives of Atlanta viewers will have to wait a little longer than usual for new episodes of the hit Bravo reality series, as cast member Kenya Moore recently told Entertainment Tonight that filming for Season 14 would likely begin this fall. However, fans should be prepared for several shake-ups to the RHOA cast when it does return. Returning as main stars are Moore, Kandi Burress, and Drew Sidora, while Shereé Whitfield will make her comeback and Marlo Hampton will be upgraded to a full-time housewife. Exiting RHOA this season are longtime main players Cynthia Bailey and Porsha Williams, though viewers shouldn’t fret, as a fresh face is joining the series: Sanya Richards-Ross. Here’s everything to know about the latest addition to RHOA, including her athletic history, job, Instagram, and more.

Born on Feb. 26, 1985, in Kingston, Jamaica, Richards-Ross developed a passion for running at 7 years old before going on to compete in track and field at St. Thomas Aquinas High School in Fort Lauderdale, Florida, and at the University of Austin in Texas. She began running professionally during her time in college, earning her first senior national title at 2003’s U.S. National Championships and qualifying for the Paris World Championships the same year.

Richards-Ross made her Olympic debut at the 2004 Athens Games on the U.S. team, which scored gold in the 4 x 400 meters relay. Alongside her teammates, she won gold in the same race at both the 2008 Beijing Games and the 2012 London Games. Additionally, she won a bronze medal in the 2008 Games’ 400-meter race and scored her first solo gold medal in the same race during the 2012 games. Aside from the Olympics, she earned a total of five gold medals and two silver medals from World Championships and three gold medals from World Relays, per HollywoodLife. She was named the IAAF Female World Athlete of the Year in both 2006 and 2009.

Ahead of the U.S. National Championship in 2015, Richards-Ross hurt her calf muscle and was forced to pull out of the competition. She then suffered an injury to her right hamstring during the 2016 Olympic Trials, which prompted her to officially retire from track and field. But Richards-Ross couldn’t stay away from the sport altogether, as she covered the 2016 and 2020 Summer Olympics live on TV as an analyst for NBC.

Richards-Ross may be a brand-new Real Housewife, but she’s no stranger to reality television, as the former athlete starred on WEtv’s Sanya’s Glam and Gold in 2013. The series ran for one six-episode season and documented her time as a professional track and field star while simultaneously building a life with her husband, fellow athlete Aaron Ross.

In 2017, she penned a memoir titled Chasing Grace: What the Quarter Mile Taught Me About God and Life, which detailed the real reason behind her disappointing bronze placement in the 2008 Beijing Games’ 400-meter race. Though she had long attributed her performance to recent injuries and lack of sleep, Richards-Ross said she terminated a pregnancy one day before leaving for the 2008 Olympics. The decision was difficult for the devout Christian athlete, who wrote about the emotional hardships she faced as a result: “I made a decision that broke me, and one from which I would not immediately heal from. Abortion would now forever be a part of my life. A scarlet letter I never thought I'd wear.”

When she’s not covering the Olympics for NBC, Richards-Ross keeps busy as the founder of MommiNation, a blog focused on offering support, inspiration, and empowerment to Black mothers. Topics covered on the site include cooking, haircare, relationships, education, workouts, child health, and fiscal advice specifically geared toward mothers.

Richards-Ross is quite active on her Instagram account, which currently boasts over 366k followers and features the bio: “Wifey, Mommi, Olympic Champion, TV Personality, Author and founder of @mommination.” She frequently shares photos with her family and friends, as well as workout videos, OOTD posts, and sponsored content. She hasn’t shared any snaps alongside her fellow RHOA castmates yet, but viewers can likely expect Bravo content to come from Richards-Ross soon.