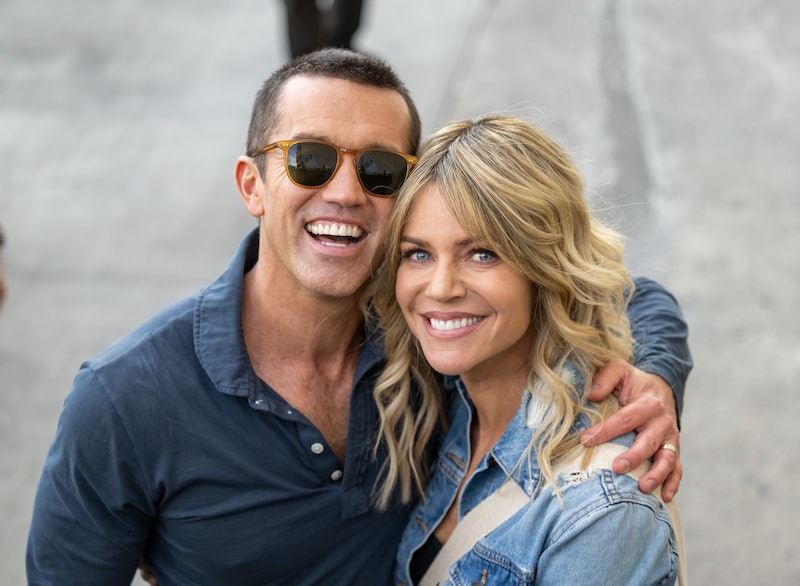 You know what they say — it’s a dangerous game mixing business and pleasure. And yet, in the case of Welcome To Wrexham’s Rob McElhenney and his wife Kaitlin Olson, getting together on the job has truly paid off. They’ve now been married for well over a decade and share two kids together. But their road to forever was far from ordinary. Read on to find out how McElhenney came to realise that Olson was the only one for him.

The couple first met on set for It’s Always Sunny In Philadelphia, the irreverent dark-comedy sitcom which McElhenney created in 2005, and developed with Glenn Howerton. Originally dreamt up to act as the show’s voice of reason, Olson’s character Dee ends up getting fully involved in “The Gang” and their morally bereft debauchery as they attempt (and regularly fail) to run an Irish bar in South Philly.

And part of this transformation was down to Olson herself. “I said the way you have the woman written right now is kind of this voice of reason, and I’m not interested in that because I can kind of see the potential of what it could be,” she told Metro US in 2013. McElhenney promised to give Deandra Reynolds’ personality an overhaul, and it ultimately convinced Olson to join the show’s network pilot. “I’m glad that I trusted him, and I’m glad that he wasn’t lying.” McElhenney later told The Guardian that his wife is “hands down the funniest woman on television.”

By the time It’s Always Sunny had been renewed for a second season, the pair had grown closer, with Olson making the first move during a cast party. Later, “we started dating, secretly, in Season 2,” Olson revealed. “Really, it’s the dumbest thing we could have done,” she joked, “and we knew that the whole time, we were like, ‘we can’t do this anymore, this is so dumb.’ We’ve got this great thing going on, we got a second season, why are we trying to ruin it? But I don’t know, it ended up working out. I’ve got two kids now.”

According to McElhenney, he knew that Olson was the one when he accidentally “p*ssed the bed” after getting “blind drunk.” “She thought it was the funniest thing that could possibly happen. I was like, ‘I’m marrying this chick,’” he admitted on The Always Sunny Podcast. “That’s what sealed the deal of us deciding to get married and since then, we’ve lived in wedded bliss.”

After two years of dating, McElhenney proposed at actor Danny DeVito's beach house in Malibu, and they tied the knot in 2008 at an idyllic vineyard. The couple’s eldest, Axel, was born two years later, with their second son Leo arriving in 2012.

Born in Portland, Olson studied theatre arts at University of Oregon before landing a string of guest roles in Curb Your Enthusiasm, Coyote Ugly, and Family Guy ahead of joining It’s Always Sunny as a series regular.

The couple’s hit series is still going strong, with a sixteenth season on the way. These days McElhenne and Olson own a themed bar called Mac’s Tavern in the show’s home city. When they’re not filming for the sitcom, meanwhile, Olson stars in the comedy series Hacks and won an Emmy for her portrayal of Deborah “DJ” Vance Jr.

More like this
Hugh Jackman Shared The Sweetest Tribute To His “Extraordinary” Wife
By El Hunt
We’ve Got A Text! Another 'Love Island' Series Is On The Way
By Darshita Goyal
You’ll Most Definitely Recognise Kyle Pryor’s Soap Star Girlfriend
By Sophie McEvoy
This 'Derry Girls' Reunion Has Delighted Sister Michael Fans
By El Hunt
Get The Very Best Of Bustle/UK