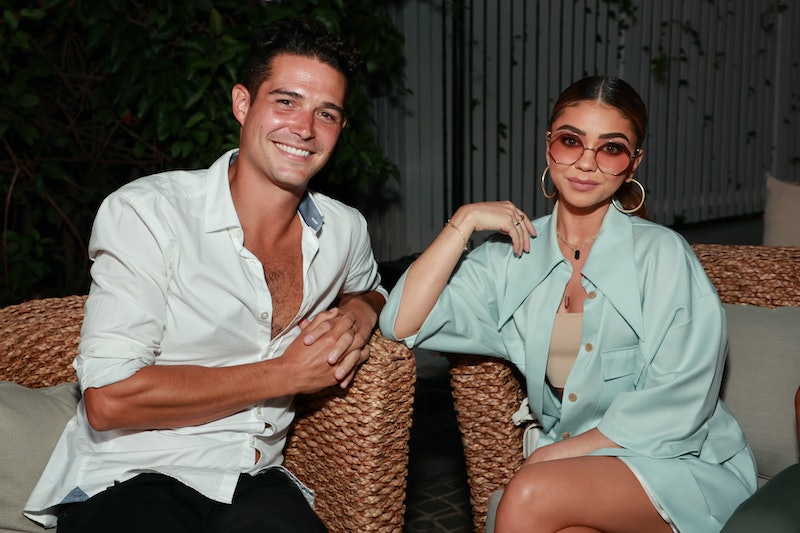 Wells Adams may not have ended up with JoJo Fletcher on The Bachelorette, but the franchise did help him find love...in a roundabout kind of way. When he showed up on Bachelor in Paradise Season 4 as the bartender, Modern Family star Sarah Hyland took notice, and she and Adams began flirting on Twitter. At some point, they moved things over to DM, and now Adams and Hyland have been in a relationship for nearly five years.

“I saw him on The Bachelorette and then he became the bartender on Bachelor in Paradise and that's when I was like, ‘Yeah, uh huh,’” Hyland explained during an appearance on The Ellen DeGeneres Show. “I thought he was real hot and then he slid into them DMs 'cause I tweeted about him.” Hyland also said on Jimmy Kimmel Live that she'd been attracted to Adams' confidence. "I was single, obviously, and was like, 'This is really awesome. You're being very forward and it's sexy and not aggressive, but very confident and sexy,' and I liked that," she recalled.

The Bachelor-born couple got engaged after Adams proposed in July 2019, but their planned wedding had to be postponed twice due to the COVID-19 pandemic. Finally, after Hyland held her bridal shower and bachelorette party in the summer of 2022, the big day arrived — and on Aug. 20, the couple got married near Santa Barbara, according to People. Read Hyland and Adams’ full relationship timeline below.

More like this
John Corbett's Wife Bo Derek Once Revealed If She's Team Aidan Or Team Big
By Alyssa Lapid
Brittany Snow Files For Divorce From Tyler Stanaland After 'Selling The OC' Drama
By Grace Wehniainen and Radhika Menon
10 Photos Of The Wildest Limo Arrivals From 'The Bachelor' Premiere
By Brad Witter
Michael B. Jordan Tackled His "Public Breakup" With Lori Harvey On 'SNL'
By Brad Witter
Get Even More From Bustle — Sign Up For The Newsletter
From hair trends to relationship advice, our daily newsletter has everything you need to sound like a person who’s on TikTok, even if you aren’t.

This article was originally published on Jan. 11, 2019