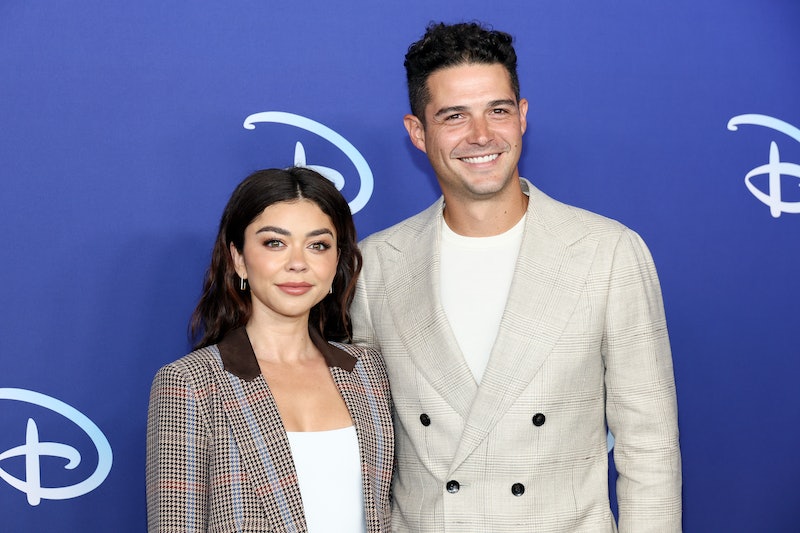 If you’ve been eagerly awaiting Sarah Hyland and Wells Adams wedding updates, you’re not alone. The couple first got engaged in 2019, and later revealed they were supposed to get married on Aug. 8, 2020 — but certain, well, world events prevented that from happening. Adams later revealed to Us Weekly that the couple actually had to postpone once after that, too. “I don’t know if I can take a third one,” he said last year. “So just pray for us, please.”

Fortunately, the couple made it to their big day — and it actually happened this time. Hyland and Adams got married on Aug. 20, People reports, adding that the ceremony took place at Sunstone Winery near Santa Barbara, California. (Ironically, it’s the same location where JoJo Fletcher and Jordan Rodgers got married earlier this year — and Hyland famously fell for Adams while watching him on Fletcher’s Bachelorette season.)

While Hyland and Adams haven’t shared official photos of the wedding just yet, you can imagine what they might have looked like — because they actually took wedding pictures already two years ago. Well, sort of. As Hyland told Ellen DeGeneres in 2020, the couple and their wedding party took “fake wedding pictures for fun” on what would have been their actual wedding day.

“I brought a white dress and, like, a veil I got on Etsy, and my bridesmaids, they got a real wedding bouquet for me and surprised me,” Hyland said. She shared the photos on Aug. 8, celebrating “2 years of would be marriage bliss” with Adams — and hinting that she wanted to “make it official already.”

Vanessa Hudgens served as one of Hyland’s bridesmaids, recently telling People about their “very healing and reflective and bonding” bachelorette party. “It was really special.”

Also in attendance at the wedding? Hyland’s Modern Family fam, of course. Sofia Vergara shared photos from the wedding on Instagram — including a photo booth moment with Nolan Gould and Jesse Tyler Ferguson, as well as Ferguson’s husband, Justin Mikita.

In a post to her story, Vergara also snapped a selfie with Julie Bowen — who was surely having her own proud (on-screen)-mother-of-the-bride moment. “I think that Wells — they balance each other,” Bowen told Us Weekly in 2019. “She’s been a professional actress since she was a kid. She’s got grit and drive and Wells is, kind of oddly more… he’s got a lot of grit and drive too, but he’s a little bit, he seems kind of laidback. They just balance each other’s energies really well and yet they’re both super driven and supportive of each other’s careers.”

Ferguson also shared a snap from the evening, captioned “dads night out ❤️.”

Adams has long been a fan of Hyland and her co-stars’ work on Modern Family, and celebrated the show after it wrapped in 2020. “For over a decade you brought so much joy, laughter, tears, and heart to people everywhere,” the beloved Bachelor in Paradise bartender wrote on Instagram at the time. “The world is a better place because of the work you and your wonderful cast and crew put in over the last 11 years. Proud to know ya kid.”