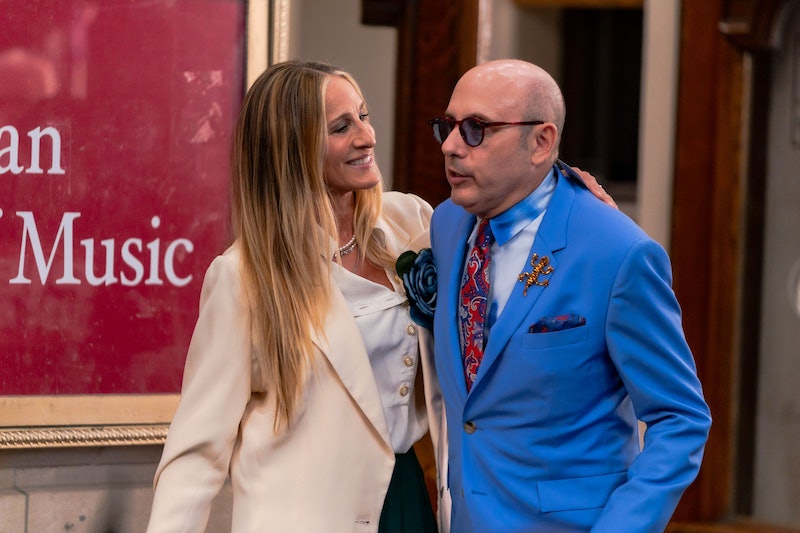 Spoilers ahead for And Just Like That... As Carrie continues to grieve the loss of Mr. Big (aka John James Preston) on And Just Like That..., her closest friends have been helping her along — to varying degrees of success. Miranda provided a practical shoulder to cry on, Charlotte did plenty of crying of her own, and Stanford, well, Stanford made her laugh. “And that is why I would call Stanford instead of you,” Carrie tells Charlotte in Episode 2, after her stylish, spectacled friend makes a joke that distracts her from the grief — if only for a moment. While Stanford was a source of light for Carrie on screen, the reality of filming his “significant” reboot storyline was a challenge.

As Sarah Jessica Parker recently explained in a conversation with Vulture, published Dec. 16, Willie Garson’s real-life illness with pancreatic cancer made his final days working on And Just Like That... “particularly difficult.” “At that point, he shared with his fellow cast that he was sick,” Parker said. “That day was excruciating, to be in a fictional world of the loss of a life, but in the real world, of somebody that you knew was sick — that was his last day working with us.”

Parker, who kept Garson’s diagnosis a secret until he was ready to share it himself, also noted that Stanford “had a very significant storyline, more so than ever” this season. Though it was his goal to complete the arc, “he knew what he needed to do to take care of his son and of himself,” Parker said, and stopped working before his death on Sept. 21.

Showrunner Michael Patrick King didn’t explain what, specifically, Stanford’s storyline might have entailed but did tell Vulture about a moment between him and Carrie that didn’t happen. “It was a scene to explain [Garson’s] absence in the series,” King said. “He was very realistic with me; he said, ‘Please, don’t think I don’t want to do it — I can’t.’ When I remember my time with Willie, the first thing I’ll think of is his love of being an actor. Every part of it.”

So if you’re wondering how Stanford will be written out of And Just Like That..., don’t expect a grand moment of closure featuring the actor himself. As King previously told The New York Times, Garson’s death would not be reflected in his character’s fate. “Because it wasn’t charming. And I knew that the audience would know,” he explained.

For now, the memory of Garson can be felt through the SATC cast with whom he worked most closely — like Parker, or Mario Cantone, who played his husband following a quiet enemies-to-lovers arc that leapt from the series to the films. (Stanford and Anthony shared a New Year’s kiss in the first, and married in the second.) “I loved him right away,” Cantone told Vulture. “He’s hilarious and biting and viciously funny ... I don’t know if there’s one season of this or many — I have no idea what the future brings — but he’s terribly, terribly missed. It’s not going to be the same.”