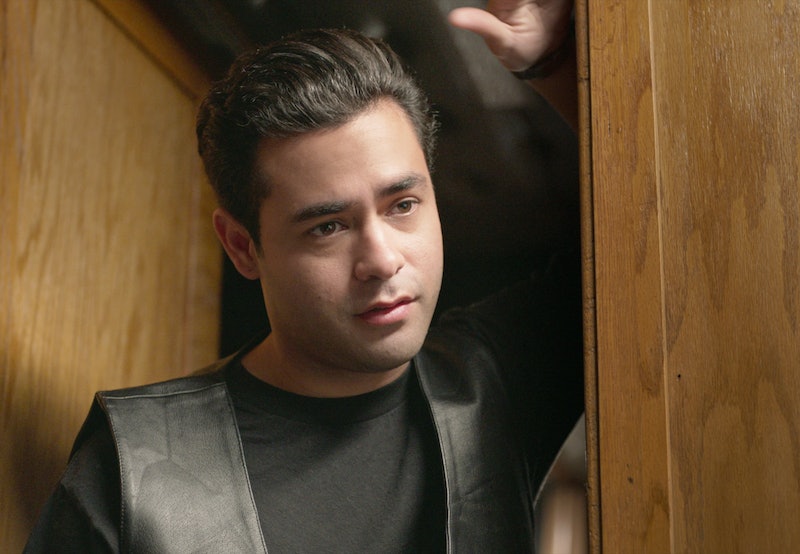 Selena Quintanilla was the face and voice of Selena y Los Dinos, but Selena's brother, A.B., was also a driving force behind her most famous songs. The bassist turned songwriter helped to pen several of her hit singles, including the well-known "Como la Flor." After Selena's untimely death in 1995, he continued to create music and carry on her legacy, which is told in Netflix's Selena: The Series.

Abraham Isaac Quintanilla III was born on Dec. 13, 1963, the first of Marcella and Abraham's kids. When A.B. was born, Abraham was still trying to make his music career with Los Dinos work. According to Joe Nick Patoski's book Selena, Abraham would often be gone on tour for so long that A.B. would forget he was his father. The band's popularity waned by 1969, so Abraham quit and settled down to raise A.B. and his second kid, Suzette. Though Abraham gave up his dreams of his own music career, A.B., Suzette, and later Selena all showed an aptitude for music, which led him to form the family band, Selena y Los Dinos. Rod Cannon, their teacher at Brazoswood High School in Texas, told Patoski that A.B. had "an obvious gift for music as well as art" and was a "talented, if somewhat introverted, guitarist in the jazz ensemble."

With Selena singing, Suzette on drums, and A.B. on bass, Selena y Los Dinos often performed at their family restaurant, Papagayos, during dinner. When the restaurant shut down, the band hit the road, and A.B. started to learn more about the nuts and bolts of being a musician. Per Patoski, he started learning about studio electronics and radio exposure after they signed with Bob Grevér's Cara label. Eventually, he began to move into more of a writing and producing role, penning songs like "Dame un Beso" with keyboardist Ricky Vela. He later went on to write Selena's other hits like "Como la Flor," "Amor Prohibido," and "No Me Queda Más."

And A.B. wasn't just a bassist and songwriter. He was also integral to building out the band and paving their path to success. As vocalist and songwriter Pete Astudillo told The Houston Chronicle, it was A.B. who convinced Abraham to let him and keyboardist Joe Ojeda join Selena y Los Dinos. "We built a really good friendship with all of the band, but there was a really good connection with A.B.,” Astudillo said. “Little by little, he started to convince his father to get Joe and I to join the band." Astudillo went on to co-write "Como la Flor" with A.B., and he also helped to write Selena's hits "Bidi Bidi Bom Bom" and "Amor Prohibido."

By the time Selena released Ven Conmigo in 1990, A.B. had fully matured as a producer. "Before, my dad had a lot of say-so in the songs and the music," Selena told Patoski. "And now I guess since my brother has proven himself, he's able to handle everything on his own."

By 1993, A.B. had set up his own production and publishing studios and was working with Astudillo on more English language albums that would broaden Selena's appeal. But on March 31, 1995, Selena was shot and killed by Yolanda Saldívar. They released her final album, "Dreaming of You," posthumously.

In the wake of her passing, A.B. laid low but eventually reappeared to produce more music. In 1999, he created Kumbia Kings, a Mexican-American cumbia group that performed until 2006. He also produced songs for Latin pop diva Thalia and Cristian Castro. “I wasn’t planning to come back,” A.B. told BMI, noting how Selena's death nearly pushed him to retire from music. He continued, “Then I bumped into these two ladies at a restaurant in Corpus Christi. They told me to keep fighting and to continue the family dream. What those ladies told me that day resonated.”

In 2016, A.B. and his new musical group, Elektro Kumbia, signed with DEL Records. He faced legal troubles in 2017 relating to nonpayment of child support and contempt of court, as reported by People. On Aug. 16 that year, he was arrested after failing to appear at a scheduled court hearing. Still, despite all the personal drama, A.B. has continued to share Selena's legacy just like the rest of his family. In March 2020, Ven Conmigo was added to the Library of Congress. Most recently, he held a livestreamed concert in Selena's honor in April.

More like this
If 'Entergalactic' Season 2 Happens, You Could Get A New Kid Cudi Album
By Kadin Burnett
Here's What Jeffrey Dahmer's Dad Has Said About His Other Son, David
By Grace Wehniainen
'Firefly Lane' Season 2 Will Be The Show's Last — But There's A Twist
By K.W. Colyard and Grace Wehniainen
Twitter Is Pouring Out Some Zhampagne As ‘Schitt’s Creek’ Leaves Netflix
By Brad Witter
Get Even More From Bustle — Sign Up For The Newsletter