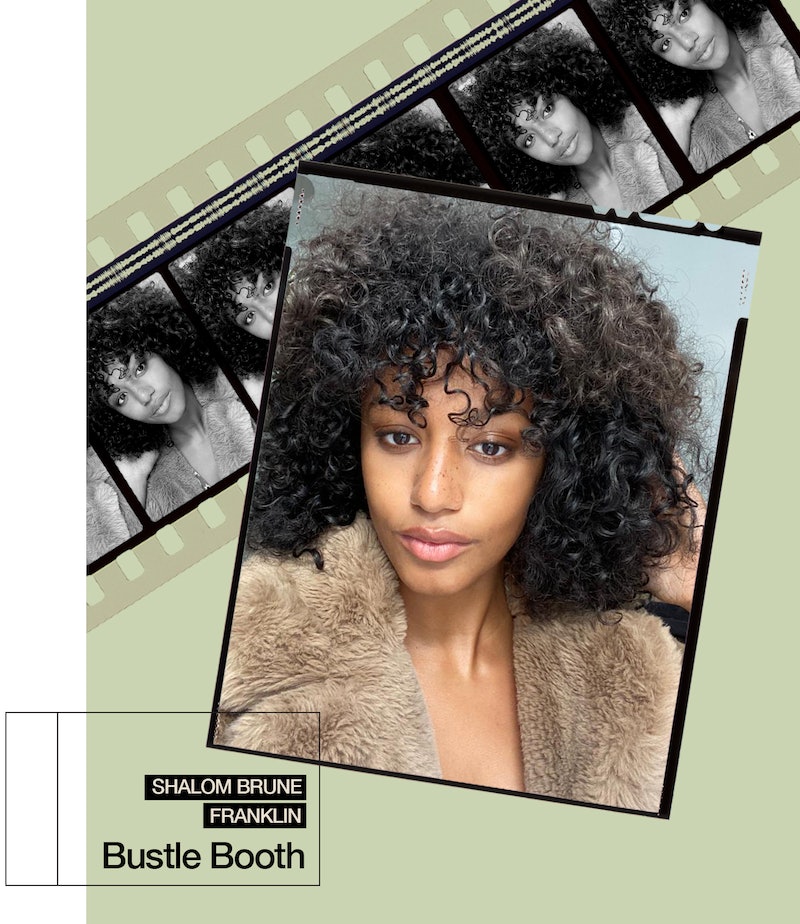 “Australian coffee! There's no question,” Shalom Brune-Franklin exclaims with equal parts enthusiasm and friendly banter as we discuss the differences between the UK and Down Under, where she spent her teenage years in a suburb of Perth, Western Australia. The 29-year-old actress returned to Australia last year, where she was filming The Tourist, an off-beat black-comedy-action series set to air on BBC One on New Year’s Day.

“It was so nice to go back, because that's where I started working in the industry, and it feels like home as well,” Brune-Franklin, who moved from St. Albans to Perth, Australia with her family when she was 14, tells me over the phone. “But it was an interesting terrain to work in, let’s just say.”

Set against the glowing red heart Australian outback, The Tourist follows Jamie Dornan (known simply as “The Man”), who, after an epic cat-and-mouse car chase that pushes him off the road in the desert, wakes up in hospital with no idea how he got there. Brune-Franklin plays Luci, a waitress that The Man meets on his journey of self-identity. “We filmed the first half of the show in summer,” she explains, “and then it turned to winter, in the middle of the Outback, where there's no cover from the wind whatsoever. It was pretty rough!”

A far cry, then, from her usual stomping ground of British TV. Last year, Brune-Franklin took on the role of Rose Dietl in limited-series Roadkill, a political drama starring Hugh Laurie, before taking to the small screen as the latest recruit in Line of Duty’s unit AC-12 for season six, Detective Constable Chloe Bishop. “It made a difference to filming Line of Duty, where I spent most of my time in my room [in Belfast] just staring at the Titanic Museum, running my lines over and over again.”

But there’s another room I’m interested in: the famous AC-12 glass room. “It is quite different!” she laughs. “Those scenes feel so theatrical because it's almost 30 pages of dialogue, and we run it through completely. We don't stop to break it up. It’s funny because Jamie [Dornan] and I were thrown into the deep end [for The Tourist], day one with a really long scene. And everyone was apologising that I had to start on a huge scene. Turns out it was 10 or 15 pages, and all I could think was: ‘It's not 30 pages with constant acronyms, this is a dream!’”

On the other side of the coin, filming The Tourist came with its own unique set of challenges. “There was a lot of stunt work,” she tells me. That shouldn’t be too new for someone with a background on the sets of Line of Duty and military drama Our Girl in 2017, surely? “The Tourist is really ambitious with the stunt work that it does on a huge scale. We had an amazing team to work with, from stunt doubles to coordinators. [Actors] almost have the easiest job on set.”

Naturally, the tale “full of shocking, surprising, funny and brutal turns” where “off-beat black comedy punctuates high-stakes action,” was what drew Brune-Franklin to the project. “I just remember that feeling, almost like an adrenaline rush reading the script. Jamie [Dornan] and I have these amazing characters that we’ve been given, and a complex relationship between the two. There was a lot of conversation in rehearsal about these characters, who they were, and why they were in the situation that we're in and really getting our heads around the twists and turns.”

Get to know more about Shalom with her Bustle Booth questionnaire below.

I order a black coffee.

I've got London, Sydney, and Perth, but Sydney and Perth will be getting deleted because I can't keep looking at them.

I haven't actually seen it yet, but just from the trailer, my friends and I are constantly saying “Father, Son and The House of Gucci” (from House of Gucci).

Danielle MacDonald. We’ve just worked together and she's amazing in every single way.

There’s an Australian reality TV show called The Block, where the production buys something like four houses near each other, and then you and the person you decide to go on the show with have to renovate the entire house and then auction it off at the end. I just think I would absolutely love to do it.

Luther Vandross, “Never Too Much”.

Moving into a new place. Creating my own little space has been really lovely.

I think I’d like them to say we had a good time and that I made them laugh.

What advice would you give to your younger self?

Don't be too hard on yourself. Be kinder to yourself.