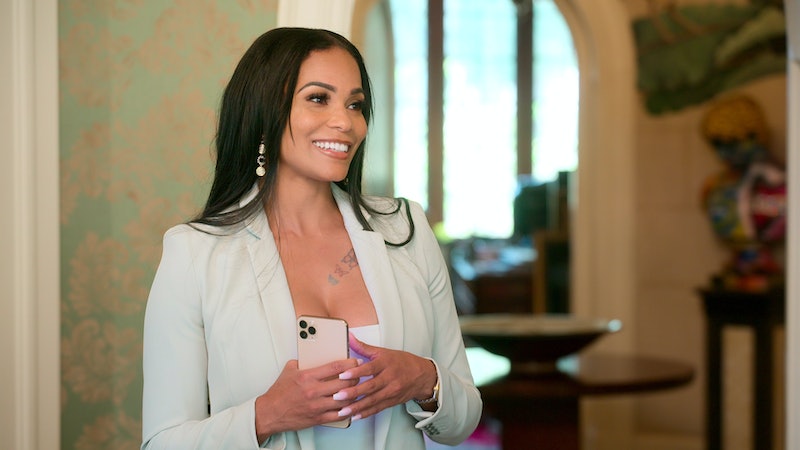 As the owner of Allure Realty, military vet Sharelle Rosado is at the center of Selling Tampa, the Florida-based spin-off from Selling Sunset creator Adam DiVello. While this marks the first time Rosado has starred in her own reality TV series, she’s also a pro when it comes to being in the public eye. As the fiance of Chad Johnson — formerly known as Chad Ochocinco, who was a wide receiver for the Cincinnati Bengals and competed on Season 10 of Dancing With the Stars — Rosado is used to people weighing in on her relationships. Here’s a brief breakdown of Rosado and Chad’s relationship timeline.

Johnson’s marriage with Basketball Wives star Evelyn Lozada ends after just 41 days of marriage. This was a result of Johnson allegedly head-butting her after she confronted him about cheating. He was arrested and sentenced to 12 months of probation. In 2019, Lozada said she’s now “cool” with Johnson.

In response to the allegations, Rosado told Page Six that she “doesn’t want to speak on that because I wasn’t there.” But she added that “people go through things, people make mistakes, and you learn from them. If you base things off of mistakes that people made then you’ll never make it in life. Nobody is perfect.”

As Rosado explained on the I Am Athlete podcast, she was the one who initiated contact with Johnson a few years ago. “I slid in his DMs,” Rosado told the group. “We used to tell — the joke was, we met on Christian Mingle, but I actually slid in his DMs.”

Rosado explained that both of them have daughters (from previous relationships) who run track, and when she spotted Johnson at a track meet, she decided to shoot her shot. “He was always a crush of mine. Like for years. Sexy, tall, chocolate. That thang know he fine,” she said. “But we would run into each other during track meets. I would see him. I didn’t say anything, but I slid into his DMs, and he responded like two seconds later. We exchanged numbers. He FaceTimed me right away, and then we just started talking.”

But Rosado noted that it took a while for things to turn romantic. “That was a couple years ago. We were friends, and then I stopped talking to him,” she explained. “We rekindled last year.”

Per Atlanta Black Star, Rosado and Johnson went public with their relationship in October 2020. On the Nov. 9, 2020, podcast episode of I Am Athlete, Johnson said he’s “truly happy with her” and he knows that “she’s the one.”

On Jan. 30, Rosado posted to her Instagram story that Johnson had proposed. “I said yessss,” she wrote on a photo of a diamond ring. On the same day, Johnson posted a photo of the two of them with the caption “a man that findeth a woman that likes McDonald’s has foundeth a wife.”

In an interview with People, Rosado revealed that she found out she was pregnant while filming Selling Tampa. This will be Johnson’s eighth child and Rosado’s fourth child, but their first child together. “I always wanted a big family,” she said, “so I think with this last one, she’s just the perfect number to finish it off.”

And it seems like Johnson has been nothing but supportive of Rosado as she makes a name for herself with Selling Tampa. “I manifested the life I’ve always dreamed of and that’s becoming a stay-at-home dad,” he jokingly wrote on Twitter in response to the Selling Tampa trailer.

On Jan. 2, just as 2022 was beginning, Rosado and Johnson welcomed their first child together, a baby girl named Serenity. The football player posted a picture of himself clad in hospital garb, and in it, he appears to be cutting the cord. The athlete shared the snap with the caption, “Just delivered Serenity ‘Hurricane’ Paula Johnson 👣” Serenity is the ninth child for Johnson and the fourth for Rosado.

Ahead of his first trip to the Super Bowl, Johnson and Rosado sat down with Entertainment Tonight to talk the big game and the big day, which at the time were both approaching. After chatting sports, the athlete of the two shared just how exiting this chapter of his life is, calling it a “second chance.”

"A second chance at everything in general, not just life, everything,” Johnson deemed this period in time. "Everyone loves a comeback story and I've been given the opportunity and the platform and the space to do just that, and I’m thankful and I’m grateful."

More like this
Cherie & Jessey's Relationship Timeline Is As Complicated As It Seems On 'Bling Empire'
By Brad Witter
Jason Oppenheim Broke Down In Tears Over His Chrishell Breakup On The 'Selling Sunset' Reunion
By Bustle Editors
Everything We Know About Chèrie & Jessey’s Abrupt Exit From Bling Empire
By Alyssa Lapid
Everything To Know About A Potential 'Love On The Spectrum U.S.' Season 2
By Gretchen Smail
Get Even More From Bustle — Sign Up For The Newsletter