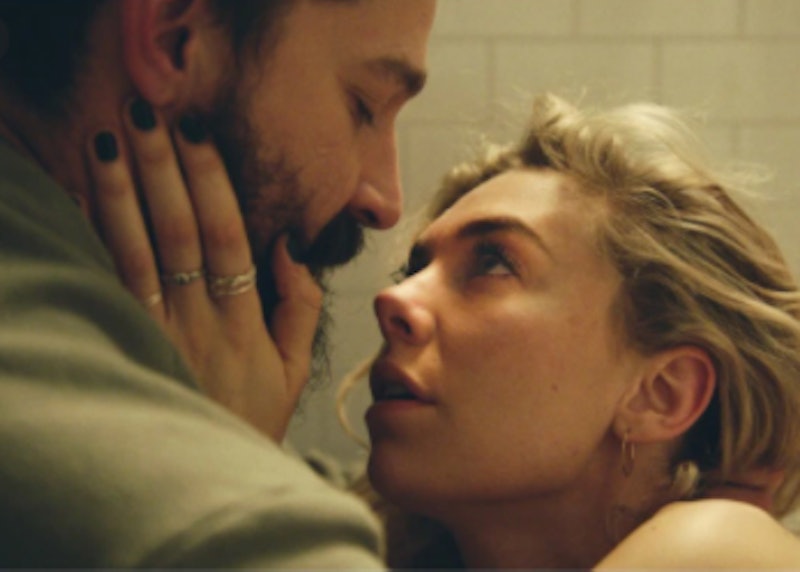 Questions about whether audiences can and should separate art from the artist are arising yet again in Hollywood. This time, it’s due to the troubling alleged behavior of actor Shia LaBeouf, whose latest role in Pieces of a Woman seems a little too close to reality.

In mid-December, musician FKA twigs filed a lawsuit against LaBeouf, her former romantic partner, for infliction of emotional distress as well as sexual battery and assault. In an interview with the New York Times, she alleged that several months into their relationship, LaBeouf began demanding that she kiss or touch him a certain number of times per day, wouldn’t let her see male acquaintances or professional contacts, and knowingly gave her a sexually transmitted infection, amongst other incidents. In the same interview, FKA twigs also recounted one particularly traumatizing episode from Valentine’s Day in 2019, when she alleged that the actor drove recklessly and threatened to crash the car they were in if she didn’t profess her love for him. She claims he then assaulted her at a gas station during the trip and forced her back into the car when she tried to get her bags.

After the lawsuit and purported incidents came to light, LaBeouf released an initial statement to the press: “I’m not in any position to tell anyone how my behavior made them feel. I have no excuses for my alcoholism or aggression, only rationalizations,” he told The New York Times. “I have been abusive to myself and everyone around me for years. I have a history of hurting the people closest to me. I’m ashamed of that history and am sorry to those I hurt. There is nothing else I can really say.” LaBeouf also said that “many of the allegations” weren’t true, though he didn’t further specify which ones.

The lawsuit isn't LaBeouf’s first time exhibiting troubling conduct, but the fallout has continued in recent weeks. Reports came out shortly thereafter that LaBeouf was fired from director Olivia Wilde’s latest project, Don’t Worry Darling, in September during pre-production because of his “poor behavior," per Variety. (It had originally been reported that his departure was due to a scheduling conflict.) And as Bustle previously reported, LaBeouf and actor Margaret Qualley, whom he was dating at the time the lawsuit was filed, also broke up in early January.

While LaBeouf has kept mum ever since releasing his initial statement, these allegations have coincided with the release of his latest film: Kornél Mundruczó’s film Pieces of a Woman. In the Netflix film, LaBeouf plays Sean Carson, a rough and boorish construction worker in recovery for substance abuse who ends up getting his partner, business executive Martha Weiss (Vanessa Kirby), pregnant. The two suffer a devastating loss during the home birth of their daughter, who dies shortly thereafter, and the film shows their struggles to manage their grief in different ways.

What’s particularly eerie about the film, however, is how much art appears to imitate life. One of the film’s most poignant scenes also becomes its most troubling in light of the allegations against LaBeouf. About midway through Pieces of a Woman, Sean and Martha try to have sex for the first time since the death of their newborn daughter. Sean takes a rougher approach to their encounter, trying to bury his grief by getting more physical and ignoring Martha’s obvious signs of distress and disinterest before she throws him off of her. As Martha apologizes and tries to reinitiate sex despite not being ready, Sean yells “F*ck it, I don’t want you now!” and leaves the room.

Days before the film’s premiere, Kirby released a statement that didn’t address the actor directly but made her sentiments known. “I stand with all survivors of abuse and respect the courage of anyone who speaks their truth,” she told The Independent. “Regarding the recent news, I can’t comment on an ongoing legal case.” Meanwhile, director Mundruczó attempted to explain why LaBeouf was cast in the first place despite his history of behavior problems, saying that he wanted to find someone “troublesome” for the role. “Of course, that’s a big question because my heart was really full with sadness and sorrow when I read [about the allegations],” he explained to Variety. “I really feel like every human, to be honest, has the right to come forward and tell their story, and I’m standing with them.”

But Mundruczó also tried to argue that LaBeouf's work on the film could be disconnected from the allegations and lawsuit in his personal life. “It’s a piece of art. You have to separate it, for sure,” he also told Variety. “When you’re watching a movie like that, what he has represented there, it’s also very important to see. It is a different approach for grief and handling problems, even if you agree or don’t agree… art has to be truthful and art has to be real. And that was always very important to me, even if I don’t know his background, and I was not digging too deep in his biography.”

For their part, Netflix, which hasn’t officially commented on the allegations, pulled LaBeouf from the film’s promotional materials and also removed his name from the movie’s For Your Consideration page for awards season, both of which were seen as moves to distance the streaming service. But nevertheless, LaBeouf's controversial presence looms large in the film.

More like this
How To Stream 'White Noise' On Netflix
By Grace Wehniainen
How To Stream Knives Out 2: When Will Glass Onion Be On Netflix?
By Radhika Menon
Here’s Everything Coming To & Leaving Netflix In December
By Jake Viswanath
You Can Finally Stream 'Ticket To Paradise' At Home
By Chloe Foussianes
Get Even More From Bustle — Sign Up For The Newsletter