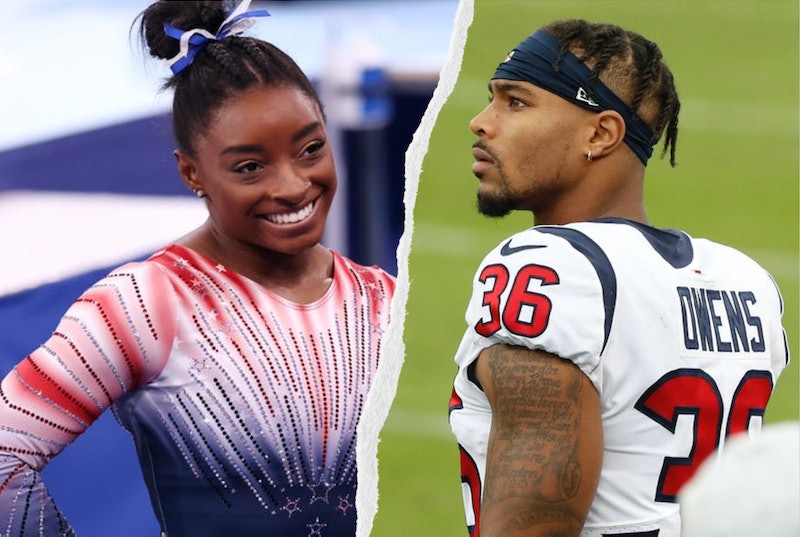 Simone Biles sparked conversation last week for withdrawing from four of her five individual event finals at the Tokyo Olympics in order to preserve her mental and physical health. While reactions from the general public were mixed, Team USA’s most decorated gymnast received support from many of her fans — especially her boyfriend, NFL star Jonathan Owens. “Your strength and courage is unmatched, and you inspire me more and more everyday,” he wrote on Instagram. When Biles returned to the games and earned a bronze medal in the women’s balance beam final event, Owens took to social media again to express how “proud” he was. Amid his sweet posts, let’s dive into who Biles’ boyfriend is and how their relationship came to be.

Speaking to Glamour in June, Biles revealed that she and Owens met on the dating app Raya in early 2020 — and he admittedly didn’t know who the 24-year-old gymnast was. She further detailed their meeting in an interview with Bustle, noting that the pair met “literally two days before” the COVID-19 lockdown hit. “We’re a ‘quaran-couple!’ If quarantine didn’t happen, I wouldn't have met him,” she said. “We got to spend a lot of quality time to see if we really liked each other, and we did!” As for how they built their bond in isolation, Biles dished that they’d FaceTime when Owens was training with his team, the Houston Texans, and hang out on their off days. “It was like, ‘OK, we have to be careful,’” she added. “I would go to his house one weekend, and he would come over to my house the [next].”

Biles wasn’t the only one determined to develop her relationship with Owens. In an interview with The Wall Street Journal Magazine, the Olympian said her sister Adria took the liberty of inviting him to a family vacation after seeing them hit it off online. Then he began joining their weekly family dinners. Location likely helped build their bond as well, as the 25-year-old athlete currently lives in Biles’ home state of Texas to play as a safety for the Texans. He originally grew up in St. Louis, Missouri, and joined the NFL in 2018 as a safety for the Arizona Cardinals before signing to the Texans in 2020 — just in time to meet Biles.

The pair first went Instagram official in August 2020 and have continuously shared romantic selfies, vacation photos, and celebratory posts for anniversaries and each other’s birthdays. They’ve also seemingly bonded over their love of dogs, specifically bulldogs, as Biles has two Frenchies, Lilo and Rambo, and Owens has a bulldog named Zeus.

Biles and Owens appear to be in it for the long run, as they’ve both gushed at length about each other in interviews. Speaking to Texas Monthly in June, the NFL star called their bond “a match made in heaven.” “There’s no better person for me. She loves me. She’s so affectionate. I just love that,” he said. “And it’s just intoxicating seeing how much work she puts into everything.”

She shared a similar sentiment in a recent chat with Hoda Kotb on the Today show. “He’s a real man. I just, I love him. We have a great time together,” Biles told the host. “Our personalities match right up. We have the same sense of humor. And he’s just great,” she continued. “He’s an athlete, too, so we really understand each other, and I think that’s why our relationship has been seamless.”