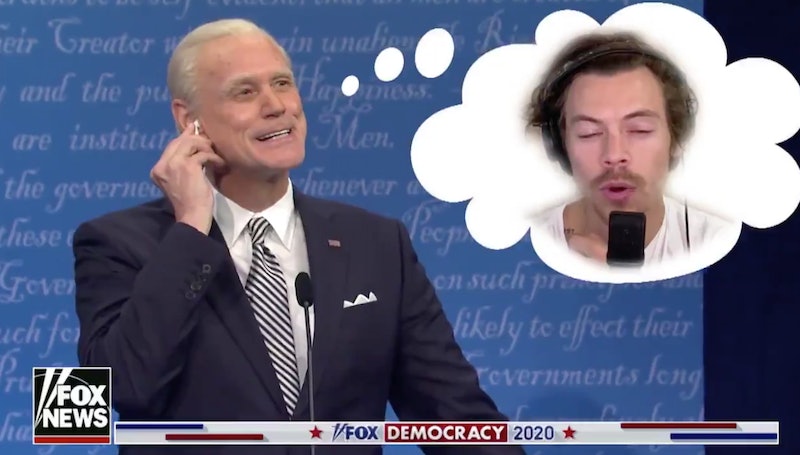 Saturday Night Live kicked off its Season 46 premiere with a cold open that forced viewers to relive the week's presidential debate between President Donald Trump and former Vice President Joe Biden. But the sketch show's version of the debate was a bit different, with a cameo by pop star Harry Styles, a handful of barbs aimed at Trump's recent coronavirus diagnosis, and Maya Rudolph's Kamala Harris making the joke of the night.

The sketch had the obvious task of lampooning what has been called the worst presidential debate in U.S. history, and it hit all the expected notes. Beck Bennett as moderator Chris Wallace opened by expressing his confidence in controlling the debate. Alec Baldwin as Donald Trump loudly interrupted his opponent every chance he got. And Jim Carrey, making his debut as Joe Biden, addressed the audience directly while lobbing a few insults at Trump. Maya Rudolph also made a surprise appearance as Kamala Harris, where she gave a new meaning to WAP, stating that America needs a Woman As President. The joke brought the house down and was particularly on-point since "WAP" rapper Megan Thee Stallion was the episode's musical guest.

But the debate occurred on Tuesday, a lifetime ago in 2020, and since then Trump has been diagnosed with and hospitalized for coronavirus. Naturally, that meant SNL slipped in a few COVID jokes at the president's expense. When asked by Wallace if both candidates had been tested prior to taking the stage, Trump claimed he had while holding up crossed fingers. He spoke of welcoming his Supreme Court nominee, "Amy Cristina Barcelona," with "open arms and uncovered faces." And Biden wished for a way that karma and science could somehow come together to show everyone how dangerous the virus can be.

Even more shocking than the COVID jokes was the appearance of Harry Styles — the real Harry Styles — who popped up in a joke where Biden calms himself down by listening to his new "Harry Styles meditation tape." Styles appeared on video, not on stage, which is a totally acceptable way to cameo on SNL in the age of coronavirus.

If there are any more presidential debates this year, you can bet SNL will be on them.

More like this
The ‘You’ Season 4 First Look Shows Joe’s New Identity And Potential Victims
By Bustle Editors
'The White Lotus' Season 2 Finally Has A Release Date
By Bustle Editors
If 'Entergalactic' Season 2 Happens, You Could Get A New Kid Cudi Album
By Kadin Burnett
'Ramy' Will “Probably” End With Season 4, According To Ramy Youssef
By Brad Witter
Get Even More From Bustle — Sign Up For The Newsletter