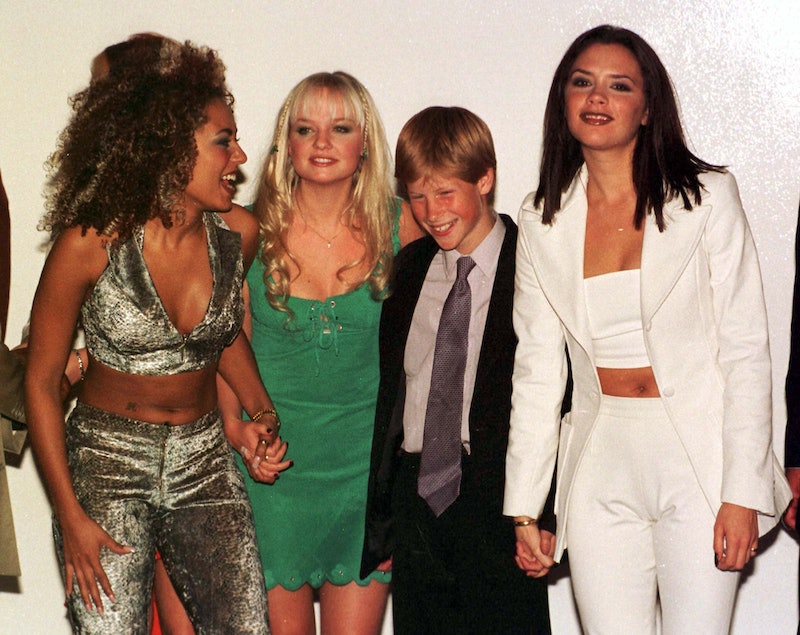 Prince Harry may be a father to two children, husband to Meghan Markle, and fifth in line to the British throne despite leaving the UK in 2020 to live in California. But Harry is also a Spice Girls stan. The Duke of Sussex’s new memoir Spare, which was released on Jan. 10, is bursting with shocking revelations about the royal family, but what the Internet is really obsessed over is Harry reciting Spice Girls lyrics in his audiobook. It has to be heard to be believed.

In his book, Harry recalled attending a Spice Girls concert in 1997 with his father King Charles III during a visit to Johannesburg, where the girl group was performing for Nelson Mandela. The visit marked his first public appearance after the death and funeral of his mother Princess Diana, and who better to lift his spirits than Posh, Baby, Ginger, Scary, and Sporty Spice? Harry recalled meeting the group on the red carpet, remembering how Emma Bunton “kept pinching” his cheeks while he focused on her shoes and Victoria Beckham “surged forward and clutched my hand.” He said the girls ended up being a distraction from the camera flashes. “The more out front they were, the more I could fade into the woodwork,” he wrote.

When the show began, Harry said his 13-year-old self was shocked to see his “Pa” get down with the Girls. “Concert? Pa? Impossible to believe,” he wrote. “Even more impossible while it was actually happening. But I saw it with my own eyes, Pa gamely nodding to the beat and tapping his foot.” He then quotes two lines of “Wannabe:” “If you want my future, forget my past / If you wanna get with me, better make it fast.”

Because it was such essential information, Harry also divulged that Geri Halliwell was his favorite Spice Girl, due to their shared history as red-headed icons. “Ginger Spice [was] the only Spice with whom I felt a real connection,” he writes. “A fellow ginger.”

People on social media went wild over the recording of Harry reciting the words of “Wannabe” as if it was a Pulitzer Prize-winning poem, spawning numerous memes and reactions on Twitter.

People were also not afraid to make jokes about it.

Evidently, Harry’s interactions with the Spice Girls left a mark, as he continued to keep in touch with the group in the following years. Later that year, Charles brought Harry and his brother William to the premiere of the Spice Girls’ iconic film Spiceworld. In 2017, their relationship came full circle when Victoria and her husband David Beckham attended Harry and Meghan’s royal wedding in 2018. Clearly, Harry knows how to spice up his life.

More like this
The Spice Girls Are Set To Reunite At King Charles III’s Coronation
By Sam Ramsden
Olivia Rodrigo Manifested Finally Meeting Demi Lovato
By Jake Viswanath
Taylor Lautner Thought Taylor Swift's 2009 VMAs Interruption Was A "Skit"
By Alyssa Lapid
The Jonas Brothers' New Album Has A Very Meta Name
By Alyssa Lapid
Get Even More From Bustle — Sign Up For The Newsletter
From hair trends to relationship advice, our daily newsletter has everything you need to sound like a person who’s on TikTok, even if you aren’t.