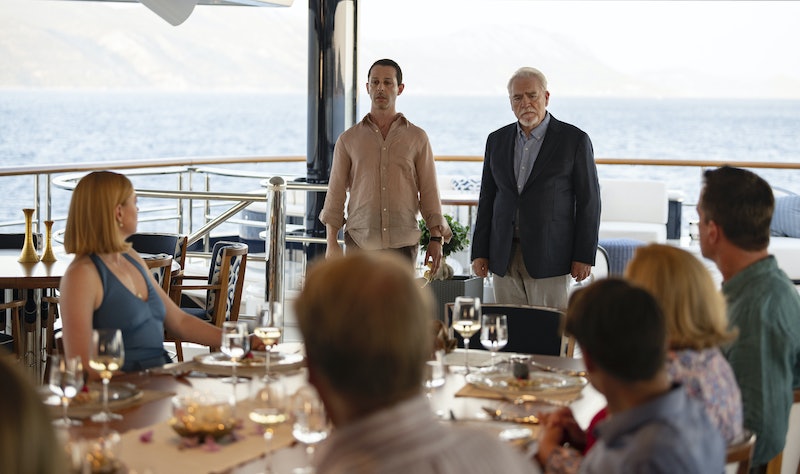 When Succession Season 3 finally premieres on Oct. 17, it will be worth the long, long wait. The last time we checked in with the Roy family was two years and one global shutdown ago, when Kendall pinned the cruise scandal on his dad (and got back on his Number One Boy bullsh*t) in a true mic-drop moment. “My father keeps a watchful eye over every inch of his whole empire,” Kendall said, “and the notion that he would’ve allowed millions of dollars in settlements and compensation to be paid without his explicit approval is utterly fanciful.” Cue a very panicked Karolina in the wings — and, surprisingly, a soft blink-and-you-miss-it smile from Logan himself as he watched it all go down on TV. He’s in trouble, yes, yet heartened to see Kendall finally step up to the plate in this bold way.

Season 3 promises to explore that big betrayal’s implications on the Roys and Roy-adjacents, but it’s far from the only Season 2 thread that you can expect to unfurl in the series’ next installment. As you prepare to revisit the Roys and all their deliciously Shakespearean drama, here is a Succession Season 2 recap of key moments you’ll want to remember.

Season 2 was Sad Kenny Season — indebted to his dad and overcome with guilt over the car accident at Shiv’s wedding, he was not feeling Number One Boy at all. But when the family sought someone to take the fall for the cruise scandal, and Logan tapped Kendall with the dreaded honor, something switched. First, the Roy patriarch told Kendall he never could have had the top job because he’s “not a killer.” OK, hurtful. But then, he coolly shrugged off Kendall’s manslaughter victim, saying there was “no real person involved” in that tragedy. Apparently, that was all Kendall needed to go from loving his dad to hating him. The next day, Kendall implicated Logan instead of himself at the press conference.

... & Gave The Performance Of A Lifetime

Though it was Season 2’s finale, “This Is Not For Tears,” that won Jeremy Strong his Emmy, his performance a few episodes earlier in “Dundee” was equally unforgettable. Otherworldly, even. Kendall shocked fans and his family with his spirited delivery of “L to the OG,” whose weirdly sincere lyrics convey Kendall’s genuine love for Logan: “Don't get it twisted, I've been through hell / But since I stan Dad, I'm alive and well.” Which, of course, made Logan sending him to slaughter (and almost succeeding) all the more heartbreaking.

Not one to be reduced to sprinkles, our beloved Cousin Greg made an important decision at the end of Season 2: officially siding with Kendall when he supplied the docs that would condemn Logan in the cruise scandal. The pair were building a friendship long before that fateful press conference, of course (remember Greg doing puppy zoomies around the apartment Kendall got for him?), and even though there’s definitely a strategic side to Kendall’s favor for Greg, the relationship seems to be sticking around for the long haul. While HBO released three separate posters teasing different factions in the upcoming Succession civil war, Greg appears on Kenny’s side in each possible iteration. Cute.

Tom and Shiv’s relationship has never been the sturdiest; by the end of Season 2, Tom seems to realize their marriage isn’t working. “I think a lot of the time, I’m really pretty unhappy,” he tells her on the beach. “I love you, I do. I just... I wonder if the sad I’d be without you would be less than the sad I get from being with you.” Ouch. His newfound assertiveness immediately manifests in other ways, too, like stealing Logan’s chicken right from under him. If that’s not symbolic of Tom 2.0 becoming a bigger player in the family business (and all its drama), what is?

Season 2 saw Shiv step into the family business like never before, offering herself as a possible contender for leading Waystar Royco — an ambition Logan seemed to support before brushing her off at that awkward Roy-Pierce dinner. Logan had been leading her on and had no intentions of naming her as the next CEO. At least, not anytime soon. Shiv, though, was not deterred by this slight. As her unethical bid to prevent a cruise victim from speaking out proves, Shiv is willing to do anything (even a bit of witness tampering) to defend her family’s business, so she’s definitely still part of the fold.

Season 2 introduced one of Succession’s most intriguing relationships (flirtationships?) yet: Roman and Gerri. But that’s not the only surprise the young, ever-sarcastic Roy sibling dished out last season. After being held hostage while trying to nail down a financing deal for Waystar Royco, Roman proved himself to be a savvy, business-minded part of the company and even advised his dad against a problematic deal. The new show of maturity could mean significant changes for Roman come Season 3.

Connor & Willa Did Their Thing

You can always count on Connor and Willa to bring a lighter, almost whimsical sort of drama to Succession, which they delivered once again in Season 2. Willa finally staged her costly play, Sands, from which Greg apparently caught some itchy bugs. Logan agreed to help finance the show, so long as Connor ditched his presidential campaign — a heartbreaking turn of events for the firstborn Roy sibling who, if you didn’t know, was interested in politics at a very young age.

Waystar Royco Is On Shaky Ground

On the business side of things, Kendall helped see Waystar Royco through its tumultuous Senate hearing. Still, it wasn’t enough to prevent Rhea from resigning as CEO to rid herself of the family’s messiness. This came after failed attempts to secure financing and go private and after an almost-merger with Pierce Media that was thwarted when New York Magazine broke the cruise scandal story during Argestes. All that to say, even with Kendall staving off the shareholders by giving up Logan, the fate of Waystar Royco is unstable going into Season 3.

More like this
Everything To Know About 'The White Lotus' Season 3
By Grace Wehniainen
Netflix Bumped Up The 'You' Season 4 Premiere Date — Here's What To Expect
By Bustle Editors
'Bel-Air' Season 2 Finally Has A Release Date & A New Trailer
By Brad Witter, Kadin Burnett and Sam Ramsden
Chippendales Founder Steve Banerjee Died Hours Before His Murder Sentencing
By Brad Witter
Get Even More From Bustle — Sign Up For The Newsletter