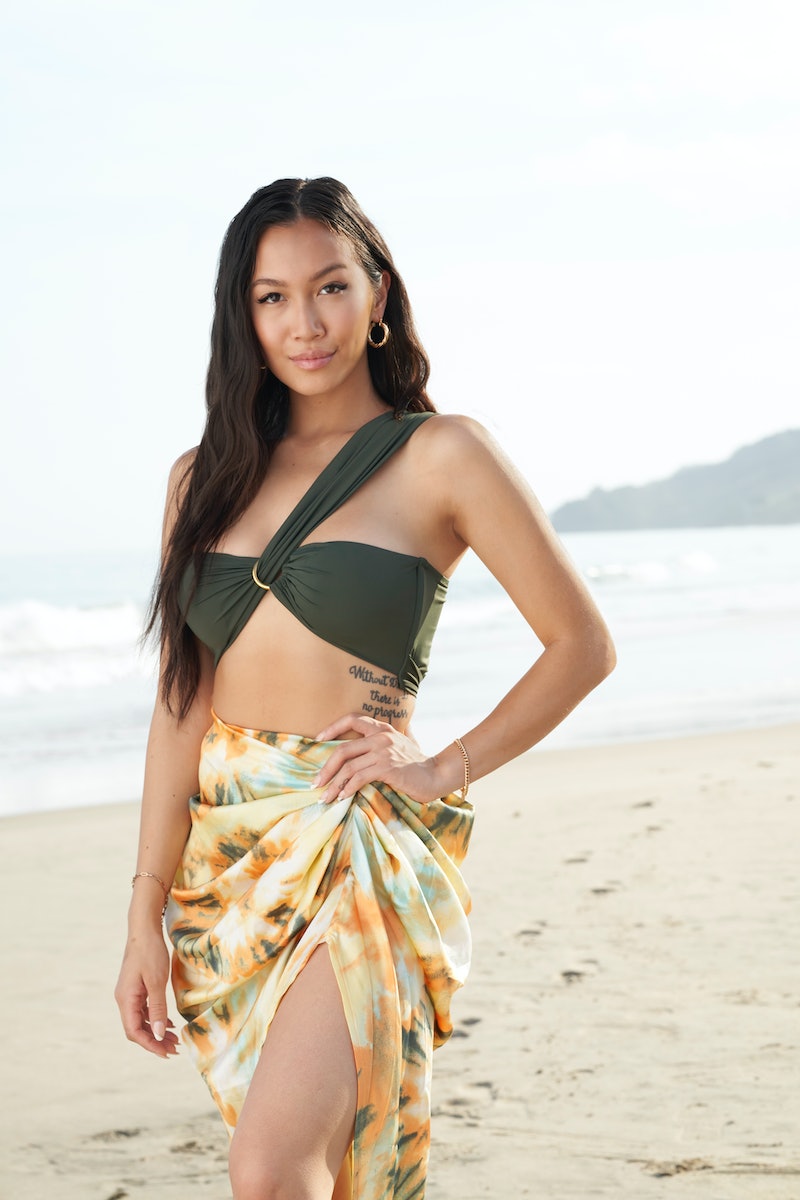 The Bachelor in Paradise producers love to bring back “villains” from past Bachelor and Bachelorette seasons, and in Season 7, that includes Tammy Ly from Peter’s Bachelor season. The 26-year-old was an early favorite thanks to her meme-able expressions and blunt quips about all the drama in the house — including the whole #ChampagneGate debacle — but her own pot-stirring soon caused fans to sour on her. Will BiP prove to be her redemption arc? Time will tell, but here’s what to remember about Tammy ahead of the show.

According to her bio for Peter’s season, Tammy’s family immigrated to Syracuse, New York during the Vietnam War, which gave her a strong drive to succeed. In high school, she successfully filed a Title IX complaint when she was denied a spot on the boys' wrestling team. Impressively, she went on to achieve a seven-to-one winning record against the male varsity wrestlers that year.

Her occupation during Peter’s Bachelor season was listed as house flipper, and she also works as a realtor. Per Tammy’s LinkedIn, she’s based in the Syracuse, New York area and specializes in helping first time home buyers. She boasts on her Bachelor Nation profile that she’s “very hardworking” and holds down six jobs: realtor, insurance agent, investor, marketer, bartender, and actress, according to an old Instagram bio.

Tammy is pretty active on Instagram, where she shares everything from modeling photoshoots to mini #WeekInMyLife vlogs. She documents the time she spends volunteering with young people at her church and boosts various charities like the clothing sustainability nonprofit Remake. She also posts about her close friendships with fellow Bachelor Nation alums like Katie Thurston, Marylynn Sienna, and Jessenia Cruz (who will also appear on BiP).

What Happened To Tammy On Peter’s Bachelor Season

Though Tammy made it all the way to Week 6, she was never really a frontrunner — at one point, she worried that Peter only saw her as “a bro.” But even though she didn’t win his heart, she did initially win over viewers, who liked that she was a successful and outspoken business woman who often commented on the show in amusing ways. Tammy had a hilariously unimpressed reaction to the news that they would have a group date in Cleveland, Ohio. She was the only contestant who mentioned how messed up it was that Peter was making his future wife potentially vomit in a spinning gyroscope in Episode 1. And she used her wrestling background to dominate a pillow fight in Episode 2.

But her role seemed to shift halfway into the season. After comforting Kelsey Weier following #ChampagneGate, Tammy told Peter that Kelsey was “emotionally unstable” and may have a serious problem with drinking. After that, it seemed like Tammy kept on reporting other contestants to Peter, like saying that Mykenna Dorn was only on the show to build her brand. When Tammy was confronted about her unkind words on the Women Tell All special, she doubled down and claimed her statements came from a place of concern.

Afterward, she took to social media to share that she’d been harassed online. “This. Is. NOT. Okay,” she wrote on Instagram. “My goal was to never hurt anyone. I am a strong woman and I am not afraid to stand up for what I believe in. I do not want to sugarcoat things and will always say how it is — that’s just who I am.” She added that she’s not a bully, but that she was “sorry if I came across that way.”

Considering Tammy is close with other Bachelor alums who were pretty level-headed on their seasons — like Katie and Jessenia — her role as an instigator of drama feels out of character. Rodger Sherman at The Ringer speculated that the change in personality may have been a way for Tammy to get on Bachelor in Paradise. When “Tammy got deeper and deeper into the season without establishing a strong connection with Peter, she had to make her move,” Sherman wrote. “She had to prove that she was a candidate who would make BIP spicier, and personally, I think it worked.”

Kelsey will be on BiP with Tammy, but it sounds like Tammy is ready to leave the old drama behind. “I’ve done a lot of reflecting and self-growth during 2020,” she wrote on her Bachelor Nation profile. “My goals have realigned and I am more than ready to find my partner-in-crime.”