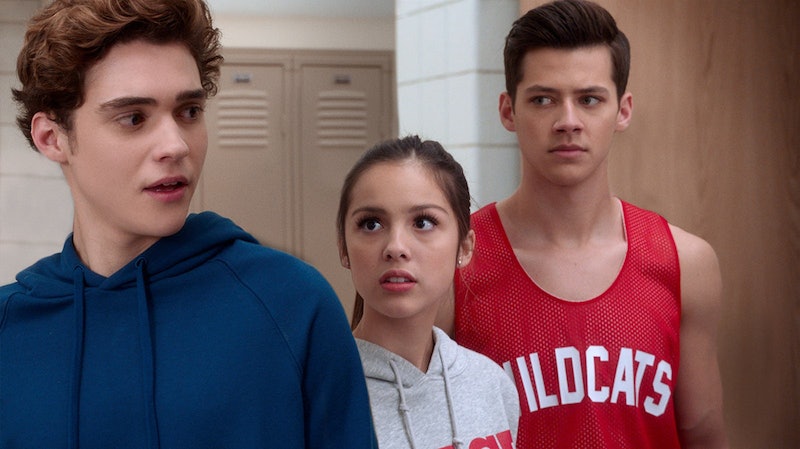 What’s something High School Musical: The Musical: The Series fans have in common with people who’ve never seen the show before? Apparently, they all care very deeply about the Disney+ stars’ rumored relationship, which became a viral topic of conversation in January when Olivia Rodrigo released her gut-wrenching ballad “drivers license.” The song’s lyrics detail a devastating breakup and paint a picture of the 18-year-old driving past her ex’s house in despair. And although she and her co-star Joshua Bassett never confirmed they were dating, people on social media felt strongly that the track’s scathing lyrics hinted at Bassett leaving Rodrigo for another popular Disney star by the name of Sabrina Carpenter.

To this day, Bassett, Rodrigo, and Carpenter have not confirmed whether their alleged love triangle was real. However, the release of “drivers license” appeared to be only the beginning of the trio’s complicated relationship saga. Bassett and Carpenter have since released songs of their own that may (or may not) address the situation, and fans have been spending months trying to decode lyrics and figure out what actually went down among these three. But let’s start with the basics and explore Bassett and Rodrigo’s relationship history, shall we? Like many great love stories, their rumored relationship began onscreen.

Bassett and Rodrigo’s chemistry was palpable following the premiere of HSMTMSM at the end of 2019. In fact, their connection was so natural that Bassett was able to improvise a scene in which his character, Ricky, told Rodrigo’s character, Nini, that he loves her. “It is the most powerful feeling in the world when you don’t even have to think, and it just comes through you,” the 20-year-old actor told the LA Times. “It was really a magical moment.”

Upon watching the scene, fans wondered if perhaps Rodrigo and Bassett were more than just friends IRL. But alas, neither Bassett nor Rodrigo ever confirmed that they were romantically involved. Still, it’s worth noting that the two frequently appeared on each other’s Instagram feeds, which only further fueled speculation that they were not just friends and co-stars, but rather a full-fledged couple.

How many times have we heard rumored celebrity couples water down their romantic relationships by calling their significant other their “best friend?” Well, it’s entirely possible that Rodrigo did just that in a January 2020 interview with the LA Times. “I love him so much,” she said of her HSMTMTS co-star. “He’s my best friend, so that really made the acting authentic and really truthful. It was like I wasn’t acting.” Maybe she wasn’t.

July 2020: Joshua is spotted out with Sabrina Carpenter

Long before the entire world tuned in to 2021’s greatest love triangle (allegedly), Bassett released a song called “Anyone Else” in July 2020 that fans thought was about Rodrigo. “How am I supposed to think about anything else? How am I to go on keeping this to myself?” he sings on the emotional track. “I am done pretending I want anyone else, anyone else, anyone else.” And while he never confirmed speculation that Rodrigo was his muse, he later revealed that the song was about falling for a friend who “was in a relationship with someone else.”

That same month, rumors started surfacing that Bassett moved on from Rodrigo when he was spotted at a Black Lives Matter protest with Carpenter. According to an onlooker who was also present at the protest, Bassett kissed the Girl Meets World star on the forehead. A month later, the two were spotted out eating together. Inevitably, their rumored romance left fans wondering what happened between Bassett and Rodrigo, which Rodrigo may have addressed on her TikTok account.

Amid all of those Bassett and Carpenter sightings, Rodrigo hinted that she got her heart broken on TikTok. In August of last year, she posted a clip of herself on the app eating a muffin while listening to “All I Want” from HSMTMTS. “And that’s on failed relationships,” she captioned the not-so-subtle post.

Fast forward to the beginning of this year and Rodrigo broke the internet with the release of her first single, “drivers license.” In the track, which stayed at No. 1 on the Billboard Hot 100 for eight weeks straight, Rodrigo sings about the “blonde girl” that her ex-boyfriend left her for. This raised some red flags, and rumors started to run rampant that the track was about Bassett and Carpenter.

When asked who the song was about, Rodrigo wouldn’t budge. “I totally understand people’s curiosity with the specifics of who the song’s about and what it’s about, but to me, that’s really the least important part of the song,” she told Billboard. “It’s resonating with people because of how emotional it is, and I think everything else is not important.”

The release of the record-breaking hit was only the beginning. Roughly one week later, Bassett released a song called “Lie Lie Lie,” which he claimed was written about a friend who lied to him behind his back. Shortly after, Carpenter dropped a song called “Skin,” which includes a clear nod at that buzzed-about “drivers license” lyric: “Maybe you didn’t mean it. Maybe ‘blonde’ was the only rhyme,” the former Disney Channel star sings. But when asked about the meaning of the song, she kept her response vague.

“[‘Skin’] isn’t calling out one single person,” Carpenter wrote on Instagram at the time. “Some lines address a specific situation, while other lines address plenty of other experiences I’ve had this past year ... it also shows that many things have actually gotten under my skin ... and I’m still learning to not give other people so much power over my feelings.”

February 2021: Joshua and Sabrina collaborate on a song

If Bassett and Carpenter were trying to quell the relationship rumors, their collaboration on a song called “We Both Know” certainly didn’t help. The Austin & Ally star teased the song in an interview with Radio.com this past February. “I can’t say too much,” she said. “It’s on his project, so I’m like, I don’t want to say too much that I can’t say, but it’s a collaboration very dear to my heart that I’m excited about. We did it a while ago now. I guess you’ll have to see!”

A month prior, Bassett spoke about the song in an interview with Febre Teen, revealing that he slid into Carpenter’s DMs to ask if she wanted to lend her voice. “I sent her a quick message and was like, ‘Hey, I think you’re really awesome and I have this song I think you would sound great on, let me know what you think,’ and she responded like 10 minutes later, gave me her number, and I sent her the song,” he recalled. “Fortunately, she liked it, so we got together in the studio and it was just a blast to make. I’m really happy with how it all turned out.”

In an interview with Billboard, Bassett hinted at the incessant rumors surrounding his love life and made it clear that he planned to focus on his music instead of petty drama. “I didn’t want my EP to be overshadowed by some other narrative that people were trying to make,” he said. “I really want the focus to be on the art instead of some of the talk and the chatter. You shouldn’t live to please everybody, but at the same time, there are ways to be sensitive to situations where maybe [the duet] has a better chance at a different time.”

After weeks of speculation that Rodrigo and Carpenter had bad blood, the “deja vu” artist said that she actually doesn’t know Carpenter at all. “I think we’ve met once or twice in passing, but I’ve never had a conversation with her,” she told Radio.com before denying that “drivers license” was about Carpenter. “I don’t think I could write a song that was meaningful or emotional about somebody that I don’t know.”

Last month, Rodrigo released a follow-up single to “drivers license” called “deja vu.” In it, she sings about watching an ex move on with someone else, references Bassett’s jacket, and mentions Billy Joel, an artist that Bassett covered in 2019. Perhaps the most poignant reference to her co-star, though, is the lyric that suggests he left her for someone in the same industry. “Do you call her, almost say my name? ‘Cause let’s be honest, we kinda do sound the same,” Rodrigo sings. “Another actress, I hate to think that I was just your type.”

While the song may feel like an obvious ode to the trio’s ongoing drama, Bassett seemed unfazed. Weeks after “deja vu” came out, he congratulated Rodrigo on his Instagram Stories. “SUUUUUUPER late on this but! I love this song so much @oliviarodrigo!!!” he wrote. “The world better watch out for the album!!!!!”

These days, Rodrigo is single and it’s unclear if Bassett is dating anyone. The latest development, however, is that Bassett recently came out as queer in an interview with Clevver News when he revealed he has a slight crush on Harry Styles. “I think he’s a nice guy, doesn’t say too much, but when he talks, it matters,” the actor said. “He’s just cool. Who doesn’t think Harry Styles is cool? Also, he’s hot, you know? He’s very charming too. Lots of things. This is also my coming out video, I guess.”

The following day, Bassett made a statement addressing his sexuality on social media. “My entire life people have told me my sexuality,” he wrote, adding that he’s been shamed by hateful people who don’t know what they’re talking about. “Toxicity, hatred, and negativity say less about the subject, but say far more about those who spew it. It’s 2021. We are the generation of love & growth. It’s time we start acting like it. Whether you love me, hate me, or damn me to hell, I love you all the same. Love who you love shamelessly. It’s OK to still be figuring out who you are. Life’s too short to let ignorance and hatred win. I choose love.”