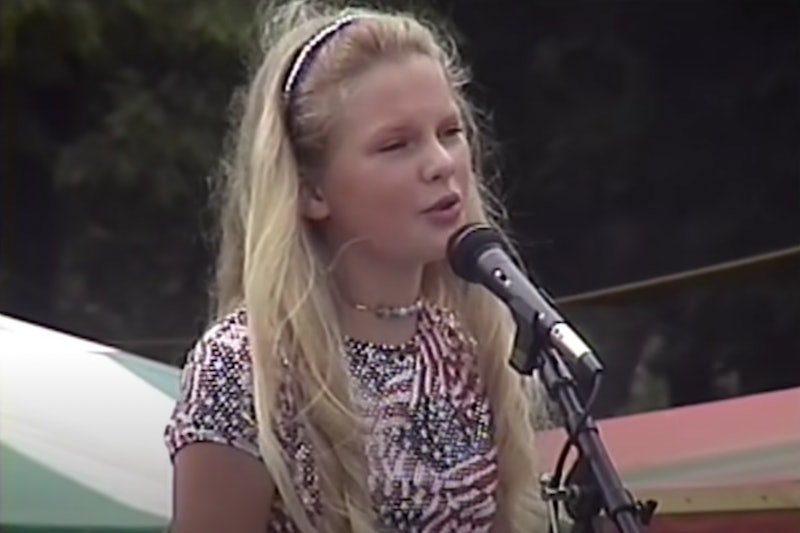 Swifties have investigated Taylor Swift so much, decoding literally every cryptic Easter egg she’s hidden for them throughout her acclaimed music career, that they could likely help professionals solve mysteries. But there are things even some of the most avid Swifties don’t know, including her unreleased tunes. Swift apparently wrote a song titled “Didn’t They” about the tragic events of 9/11 when she was still an aspiring country singer-songwriter. A final version of the song is nowhere to be found on her nine studio albums, but a recording of “Didn’t They” eventually made its way onto the internet in 2013, and some hardcore Swifties have been crying to it ever since.

According to fanlore (a folklore-ian term for fan speculation on Reddit and YouTube comments), Swift wrote “Didn’t They” at the mere age of 11 or 12, at some point after the Sept. 11, 2001, terrorist attacks that killed 2,996 people when planes crashed into the World Trade Center’s Twin Towers in New York City and the Pentagon in Washington, D.C. The singer, who was famously born in 1989, would have been 11 years old on 9/11, so it tracks that she would have written this song soon after that day or just a few months after processing the events.

Swift has not acknowledged the existence of “Didn’t They” (listen below), so fans don’t know much about the song or how she feels about the song today. Bustle reached out to Swift’s rep for comment, and we’ll update this post with more details if we get a response.

Unlike many songs inspired by 9/11 that preach about perseverance and resilience, a pre-teen Swift tackles the terrorist attack head-on, focusing on the devastating emotions that people of all ages experienced. The first verse focuses on a young schoolgirl who saw the Twin Towers fall.

“She walks to school / With her arms crossed / It’s just another day / At 10 o’clock she hears this screaming / Then finally she sees them / It’s scary how things change / And I saw the story on the news / I saw the footage from the roof / I sat down and cried.”

The second verse tells a fictional story of a father who boarded a flight that got hijacked and used his last words to say that his God died for him, not the other way around:

“He kissed his wife goodbye / And took the earliest flight / So he could be home that night / To put his kids to sleep / Down the aisle / Three men walked and said, ‘We’re here to die for our God’ / He stood up and said, ‘That’s funny ’cause my God died for me.’”

According to annotations on lyric analysis site Genius, Swift questions God on the song’s chorus, asking how an all-powerful being could have let this tragedy happen. “Didn’t they call you?” she sings. “Didn’t they need you bad enough? Was there some reason I’m not aware of? Did you not write it down, just one more thing to do ... and didn’t they pray too?”

Swift may never comment on how she feels about the song she wrote two decades ago, but still, as a pre-teen, Swift still wrote a poignant and moving track exploring the complex stories and emotions of one of the world’s most impactful tragedies, in a way that felt relatable to all and tugged on heartstrings without getting cheesy. The demo’s vocals show her youth, but her ability to whittle those emotions into simple melodies and thought-provoking lines shows why Swift went on to become one of the most acclaimed songwriters of our time.

READ NEXT: The Definitive Ranking Of Taylor Swift’s Interludes

More like this
Everything To Know About Taylor Swift’s 10th Studio Album, 'Midnights'
By Grace Wehniainen and Jake Viswanath
Stormzy’s “Mel Made Me Do It” Is A Tribute To Black Talent & Success
By Catharina Cheung
Twitter Is Freaking Out Over Rihanna’s 2023 Super Bowl Halftime Show Announcement
By Stephanie Topacio Long
What Demi Lovato Really Thinks About Child Stardom, Depression, & Sobriety
By Radhika Menon
Get Even More From Bustle — Sign Up For The Newsletter