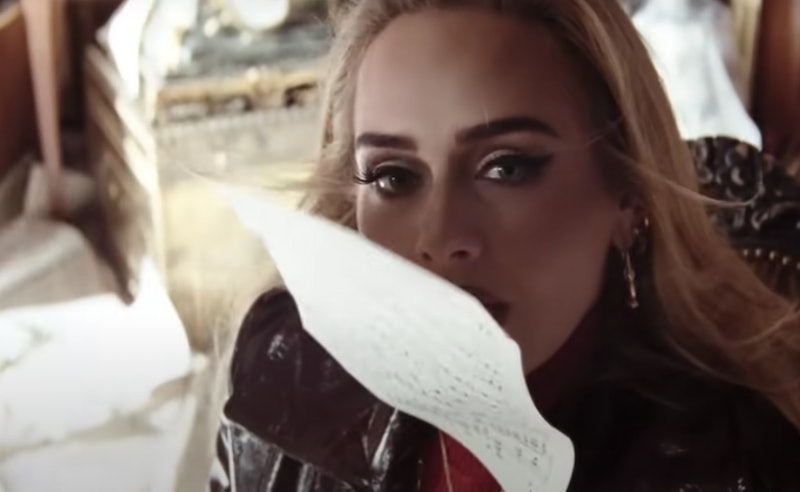 When Adele’s latest single “Easy On Me” dropped on Oct. 15, it all but broke the internet. Not just because it signaled the star’s return to music, but because it brought with it a brand new music video for fans to pick through and obsess about.

Throughout her promo tour for the album, Adele has been interviewed by Vogue, she’s done an unforgettable Instagram Live, and she’s announced not one but two TV specials. And this week she’s been back at it again, releasing a bloopers reel from her “Easy On Me” video shoot so fans can see what went on behind the scenes.

The hilarious, two-minute video shows Adele struggling to get to grips with her phone and having trouble with her (now famous) burgundy trench coat, which keeps getting caught up on her suitcase. “This f*cking coat,” she laughs, sunglasses in hand.

In all the clips, Adele’s personality shines through, at one point giving the camera a cheeky wink and laughing throughout all the muck-ups. In another clip she sings as paper blows up into her face, forcing the singer to restart.

Fans took to social media in their droves to revel in the singer’s misfortune and delight at getting an inside look into her latest video. “We’re blessed with bloopers now? I’m loving this Adele era already,” said one fan on Twitter. Another wrote, “These bloopers increased my life by 10 years.”

With sightings of the star, who is now back in London in anticipation for a new ITV project called An Audience With Adele, fans are gearing up to see the star back on home soil performing hits from her new album as well as hopefully some old favourites.