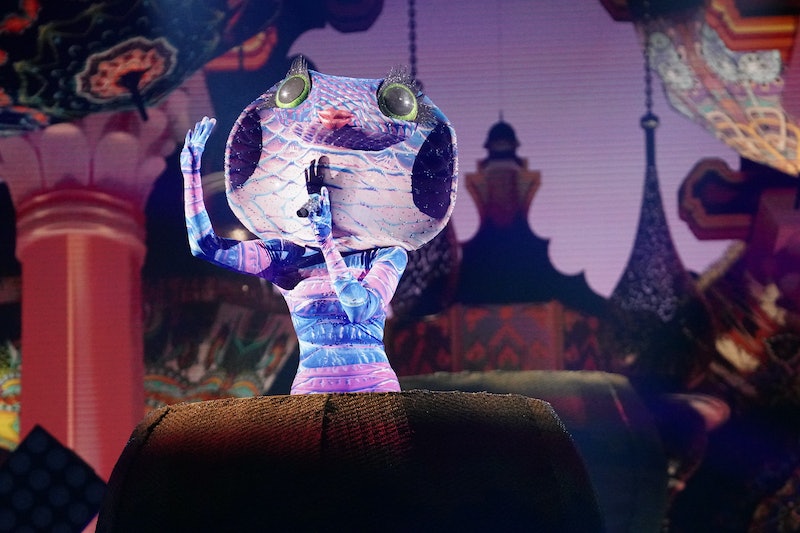 The Masked Singer is officially into the third round of “The Good, The Bad, and The Cuddly” competition. This time, Team Baddie has come out strong with Queen Cobra, a sparkly and sassy competitor who proclaimed in her clue package that “goodie[s] ruin all the fun.” Her performance of Lizzo’s “Good as Hell” impressed the judges — and also completely threw them off, since five other cobras appeared from their own snake charmer baskets to perform alongside her. “Is it one? Is it six?” host Nick Cannon asked. “Is it Queen Cobra or Queen Cobras?”

Only one Queen Cobra — the one who performed in the middle and sang most of Lizzo’s lyrics — came down to speak to the judges. But she purposely kept the truth about how many singers there are pretty vague: “I am here to keep you all on your toes and guessing,” she simply said. She added that she’s ready to “attack the competition, so get ready for some action.”

That statement led to the judges’ theories that Queen Cobra is an actor who has a background in action or superhero films. The rest of her clue package seemed to fit with that idea. Though it was meant to be an advertisement for “Reptile Roast Coffee,” the clip was also filmed like a superhero show, with Queen Cobra playing the villain to a series of masked-up superheroes. The clip featured two Queen Cobras, and they went back and forth stealing money and taunting the heroes — some of whom had eye masks similar to the ones you’d see on DC Comics heroes. Visual clues included a rocket ship decal on a trashcan, what appeared to be a Batman logo on a coffee cup, and a photo of Bradley Cooper. Queen Cobra said the coffee has been “turning goodies bad since 1990.”

Nicole Scherzinger said that Queen Cobra had to be a professional singer, while Robin Thicke guessed Jada and Willow Smith. Jenny McCarthy guessed that it would be “two queens coming together,” like Brandy and Monica. And Ken Jeong honed in on all the Batman clues and guessed that the lead singer could just be Catwoman actor Anne Hathaway. On Twitter, early fan guesses for Queen Cobra have included Cobra Kai actor Peyton List; trans singer Kim Petras (as Queen Cobra’s colors look like the transgender pride flag); or any of the actors who have played Lois Lane or Lana Lang, including Amy Adams, Kristin Kreuk, and Teri Hatcher.

If we follow Jeong’s Batman guess, two other possibilities are Catwoman actors Michelle Pfeiffer and Halle Berry, who can both sing. Alternatively, if we assume that the Queen Cobras guess is correct, we could be looking at a girl group from the ’90s or early 2000s, when groups like The Spice Girls, Danity Kane, or En Vogue — whose first album debuted in 1990, which is in line with Queen Cobra’s clue — were popular. Even Scherzinger’s own group the Pussycat Dolls were big back then. Notably, in January there was drama between Scherzinger and the other Pussycat Dolls, with the rest of the group alleging that Scherzinger canceled their 2019 reunion tour without consulting with them. Considering The Masked Singer loves courting controversy — see: that cursed Rudy Giuliani reveal — is it possible Queen Cobra is just the Pussycat Dolls sans Scherzinger? It’s a far-fetched theory, but the show has certainly done weirder things.